Plot: Lan, Maylu and Dex are introduced to their new classmate, Yai Ayano. Her father is the president of the massive game company, Ayanotech, and she’s super rich, cultured, talented and obnoxious. As Dr. Wily’s newest lackey, Maddy, unleashes her NetNavi, Wackoman, on the city’s traffic control system, causing massive traffic backups, Yai gets caught in the mess on her way home. What’s worse, Yai needs to go pee! She needs Lan and Megaman to beat Wackoman and bring her to a potty or else she’ll be making a mess of her own.

Breakdown: Our episode starts with an introduction to Yai, an annoying spoiled little rich girl who is full of herself. Wonderful.

She introduces herself to the class with an hour-long DVD chronicling her as a person. *sigh* It’s going to be one of those episodes, isn’t it?

This entire introduction is littered with animation shortcuts and cardboard-cutout animation, by the way.

Class goes on and Yai amazes everyone with how brilliant she is. I wasn’t aware they did advanced algebra in fifth grade, but okay.

The other NetNavis are also introduced to Yai’s NetNavi, Glide, who is basically a virtual butler. He starts hitting on Roll because of course he does.

Kid who is not animated #1: “Staring contest!”

Kid who is not animated #2: “You’re on!” Meta humor or trying to explain away lack of animation? Hm.

Yai can’t eat the disgusting commoner food they have for lunch (That they seemingly eat in their classroom?) so she decides to call her personal chef into the room to deliver a proper rich person meal.

Lan and Dex stop by Yai’s house to check it out, and of course it’s massive. They want to get a closer look, so they decide to sneak in through a massive hole in the steel bar fence that is there and not immediately repaired because reasons.

Yai decides to be a bitch and sics her—OH MY GOD, IT’S THE SENTIENT LAWNMOWER FROM PIKACHU’S PIKABOO! RUN! LURE IT INTO A SHED! THAT’S ITS WEAKNESS FOR SOME REASON!!

They run into the tennis courts, but are soon pelted with tennis balls. They then run to a bunch of Athena statues, which, for some reason, harbor a bunch of high powered water jets?

They run from those and get caught in a giant cage. Lan decides to jack in Megaman to the security system to see if he can free them. Megaman asks Glide if he can do anything, so he pushes Megaman down a hole, which also simultaneously sends Dex and Lan through a tube that exits out into the sidewalk.

The next day, Dr. Wily’s new lacky, Maddy, sends her NetNavi, Wackoman, to cause a huge traffic jam.

Also, yes, malfunctioning traffic lights are a hazard, but they don’t cause pileups and backups for miles a second after they happen. If they did, whenever we had blackouts there’d be god knows how much carnage.

Maddy, by the way, set out to cause chaos. Because, yes, mildly inconveniencing the general populace is so chaotic. I mean, yeah, there are accidents happening and that’s risky, but really, if even ovens have their own networks, certainly hacking into the cars themselves and purposely causing wrecks would make more sense. 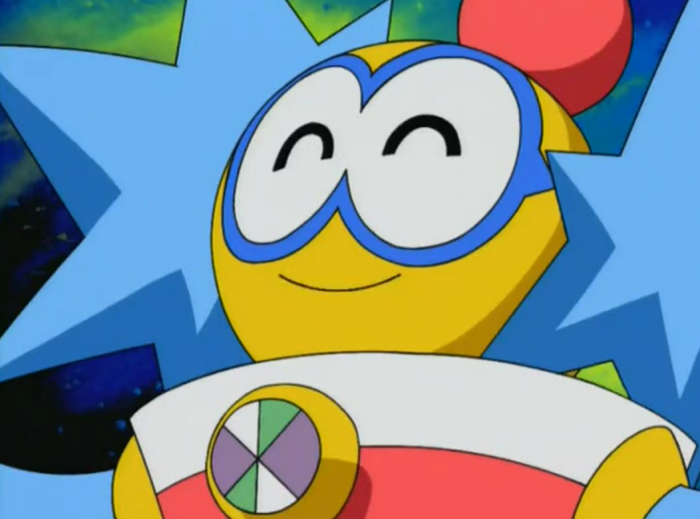 As if having the name “Wackoman” wasn’t non-intimidating enough as it was….

Yai has to go pee, but when Maylu tells her the restroom is free, she refuses to use a bathroom without gold faucets. Okay…

Yai heads home, but the traffic is still horrible. And the police aren’t manually directing traffic….because?? What, would that make too much sense and hinder the plot?

Because she didn’t pee at school, she’s all fidgety in the car. She jacks Glide into the cyber matrix to find whatever’s causing the traffic jam and stop it so she can get home and go to the bathroom.

Boy, today’s plot sure is a nailbiter.

Megaman: “Actually, all of the traffic lights are red. That’s why no one’s moving!” So, what, they believe they can never move ever? They’ll rot in their cars and die of dehydration and starvation?

Glide has fallen to Wackoman. Though, personally, I think he’s staying down out of shame of being defeated by something called Wackoman. Megaman is jacked in when Lan becomes curious as to what’s causing the jam. He confronts Wackoman who fights with a giant bouncy ball, because why not add even less of a reason to take him seriously.

Unable to hold her pee anymore, Yai climbs out of the window of her limo. I thought she was going to cross the street and go to a public building to use the restroom, but I guess that would make too much sense, so she just…climbs on the roof of the car and stands there for some reason.

Lan shows up and she hops on the roofs of all of the cars and tells him she needs to go to the bathroom. Again, why is that deemed safer or more logical than just walking on the road? Also, you have to piss, so yeah hop around on the roofs of cars and get your adrenaline running – that’s never a bad idea.

Lan rushes her on his rollerblades through the city….

Lan: “We need help, Megaman!” Why the fuck are you asking your NetNavi for help getting a little girl to the bathroom? And why are you traveling so far to do so? You’re passing so many buildings that certainly have public restrooms.

Anyway, just because I know you’re on the edge of your seat, I’ll mention that Lan makes it to the control center in time and Yai makes a piddle.

Lan jacks into the traffic control center’s network and upgrades Megaman with a Cyber Sword Battle Chip. He’s about to defeat Wackoman, but Maddy tells him to log out before he’s able to land the hit.

The traffic lights are fine now, yay, and just to top off the true emotionally impacting, soul-enriching plotline of Yai, she arrives in a pink limousine that has its own potty. Oh. Happy days are here again.

This episode was so mind-meltingly dumb I’m actually kinda impressed it even exists. It’s like Nina Needs to Go meets a traffic PSA. Who thought this was a good idea? How did this leave any brainstorming session?

Why do we keep decreasing the threat levels with these episodes? First it was malfunctioning ovens all over the city causing house fires, which could destroy homes, cause thousands of dollars in property damage, cause irreparable damage to precious family heirlooms and easily kill people. Then we had an out of control subway train, which could easily kill a large group of people.

And now…we have perpetual red lights, traffic jams, a few fender benders and a little girl needing to make tinkle.

Yai’s an annoying little pissant (lolpuns) her NetNavi isn’t much better, the plot with the traffic lights was stupid, lazy and made no sense, the plot with Yai’s need to go pee-pee was—I can’t even believe I wrote that out, it’s so dumb, Maddy’s uninteresting, Wackoman’s non-threatening and irritating just in his appearance and mannerisms – this whole episode is an assault on the senses, my intelligence and my patience. There’s nothing worthwhile here. Moving on.

Next time, Yai is held hostage by a rare battle chip collector, threatening to delete Glide if she doesn’t give him some chips.