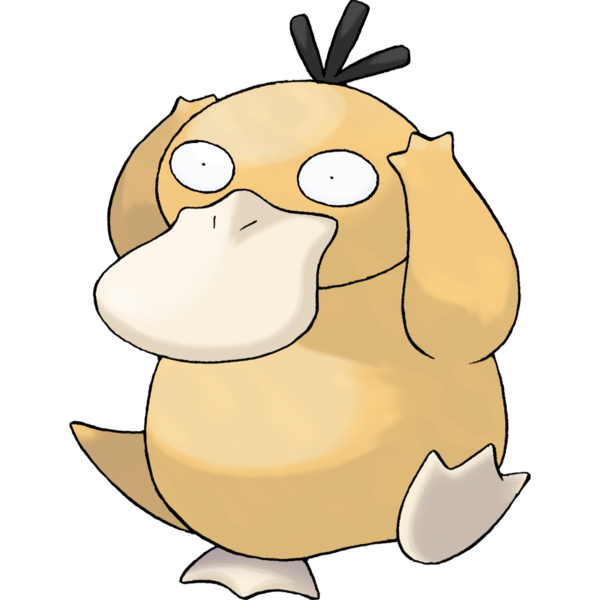 Name: A combination of the words ‘Psychic’ and ‘Duck’ Psyduck has a very simple but effective, funny, snappy and cute name. Few names in the Pokemon franchise are as iconic as little ol’ Psyduck.

Originally, it was named Koduck, which was ‘Duck’ in combination with ‘Ko’ for ‘small’ or ‘child’ which is fitting. Koduck’s a cute name too, but I love Psyduck much more.

Fun Fact: In French, it’s called Psykokwak, which is one of the best words I’ve ever heard in my life. It sounds like a metal band name. In Korea, it’s called Gorapaduck, which is also really cute and funny. It’s a combination of ‘Duck’ with ‘Gol’ for ‘brain’ or ‘head’ and ‘Apueda’ for ‘Sick’ or ‘Hurt’ in reference to its constant headache.

….Oh and in German, it’s called Enton, which I found hilarious. It comes from ‘Ente’ for ‘Duck’ but it just sounds like some dude’s name.

Design: Like its name, Psyduck’s design is quite simple, being just a pudgy, doofy yellow duck, but I do think Psyduck is pretty darn cute. I absolutely love ducks. They’re one of my favorite animals of all time. You can bet I’ll love pretty much anything if it has a duck on it. I just want to give Psyduck a hug. It’s like a big rubber ducky. Granted, it is kinda weirdly shaped for a duck. It doesn’t really have wings, and it doesn’t look like it’d swim very well at all (Misty’s Psyduck can’t swim…) but I still think it’s really cute.

Sprite-wise, I think Silver is really cute because it looks like its booping its own bill.

I don’t get DP at all….is it on a swing or what’s happening there?

HG/SS is hilarious. It looks like it’s being scared shitless.

Gen V is adorable. It’s just tilting its head quizzically, like a puppy.

Everything else is fine.

In Gen II, its coloring is a little different. It has a darker shade of blue, almost a purple, and I think it looks really cool.

Dex Entries and Backstory: As you probably guessed, a good chunk of Psyduck’s lore has to do with its intense and constant headache. It’s always seen holding its head because of the headache, and it’s mostly vacant and static demeanor are also attributed to trying to calm the pain, which is actually quite sad. When the headache gets particularly bad, it will unleash powerful psychic abilities. However, people are uncertain whether most Psyduck intend to do this.

Crystal mentions that the psychic abilities only manifest when the sleeping cells in Psyduck’s brain wake up….whatever that means. It never remembers these psychic episodes, which is why it constantly looks confused. Additionally, the more painful the headache, the more powerful the psychic powers that accompany these episodes.

Apparently in Legends: Arceus, the Pokedex notes that someone is trying to find a way to ease Psyduck’s headache pain, which is nice to hear after over a decade of people abusing the poor thing’s condition to use its psychic powers, COUGHCOUGHMISTYCOUGHCOUGH.

In regards to design, Psyduck is obviously based on a duck, but particularly it is inspired by the looks of rubber ducks, and it also seems to have physical traits of platypuses. 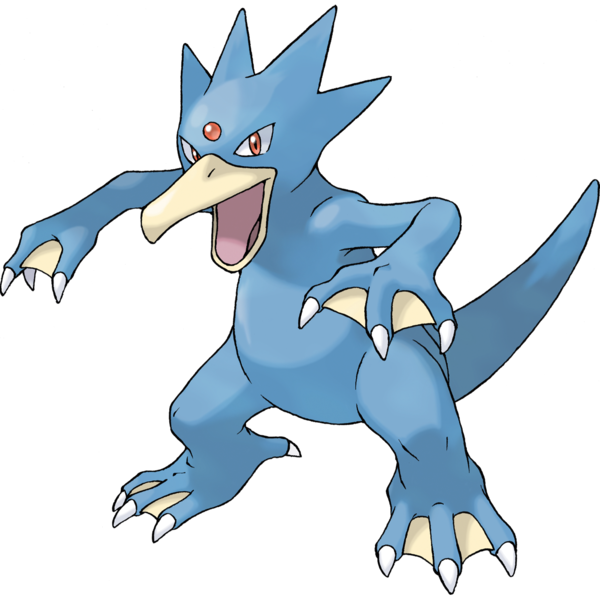 Name: A mixture of ‘Gold’ and ‘Duck’ Golduck’s name is alright. It’s not as snappy as Psyduck, and I never quite got the ‘Gol’ part. I literally just learned right this moment that it’s for ‘Gold’ but I still didn’t understand why. Apparently, it’s because gold symbolizes psychic powers….and…sure. Okay? It’s a fine name, I just wish it were a little cooler and made more sense. Its original Japanese name is retained here.

Fun Fact: In France, it’s known as Akwakwak, for ‘Aquatique’ (aquatic) and ‘Couac’ (quack) which is amazing, one of my new favorite things ever, and the fact that that’s not the English name is a crime.

Design: I’ve always loved Golduck’s design. It’s one of my favorite Pokemon. It has a cool looking face, I like the jewel on its forehead, it’s a great shade of blue, and it does manage to look intimidating from its humble roots as a Psyduck.

My only real issue with it is that it doesn’t look like Psyduck in the slightest besides the fact that they’re both ducks. This isn’t inherently a deal breaker as many evolutions don’t look like their predecessors, but it does bug me when evolved Pokemon don’t look like their pre-evos at all because part of the fun of evos is taking something that looks small or childish and altering it in various manners to make it look like a tougher and more powerful Pokemon. Anyone can take two completely dissimilar Pokemon and claim they’re evolutions. Part of the challenge of Pokemon design is building upon base evos and making them look stronger.

Sprite-Wise, Gen I is hilarious. RB looks like it was hastily drawn by a second grader, and RG looks like its doing its damnedest to give a kawaii expression.

Yellow looks much better, but I must point out its back spite in that it’s not a back sprite at all. It’s a side profile. And it is awful. Its tail is pointing straight up, its shoulder is crammed into its head, its eye is pure white and makes it look dead. It’s one of the weirder back sprites I’ve seen.

Gen II’s alright with the highlight being the cool slashing animation on Crystal.

Gen III is alright. The animation on Emerald looks like it’s dodging something for whatever reason.

In Gen IV, DP looks insanely goofy because it looks like it accidentally set foot on very hot sand at the beach.

Platinum isn’t any better as it looks like it just barely avoided accidentally walking off a cliff.

HG/SS is a simply yell animation, and that’s fine.

The loop animation for Gen V is alright, and every other Gen is fine.

Golduck’s shiny is really nice. It’s what I like to refer to as a blue raspberry shade of blue with some pink in the bill.

Gen II’s version is quite weird, though, as the shiny pretty much looks like normal Golduck while the normal version looks purple in GS and navy blue in Crystal.

Dex Entries and Backstory: One of the weirdest things about Golduck is that it differentiates itself even further from Psyduck by most of the Dex entries not mentioning anything about psychic powers. Most of them just mention that it’s an incredibly fast swimmer and even claims it’s the fastest swimming Pokemon. It’s also such a powerful swimmer that even swimming in harsh seas doesn’t affect it at all, and its powerful swimming abilities have been used to help rescue sailors from shipwrecks.

It’s commonly mistaken for a kappa, which is a design aspect added to the evolution (IE the webbed hands).

Its psychic powers do get mentioned here and there, but nowhere near to the extent of focus that its given with Psyduck. It also seems like Golduck’s psychic power is at its peak when its swimming particularly fast for some reason.

Speaking of the jewel, Sun states that people believe the jewel grants the owner supernatural powers. As a result, Golduck were over-hunted for their jewels in the past, which is awful.

It will also fish along the banks of rivers, which is a quaint little note to cover before we get to Shield where apparently the newest legend around Golduck is that those who defiled its river were dragged underwater and “taken away” which I think is implying ancient Golduck drowned them, which…Uh…holy shit.

And uh…on that dark note we close out the Duck line.

Next time, we tackle the Monkey line!