CotD(s): Nastina – Basically Brutella, just with a gaggle of scantily clad bishies around her at all times. And if they’re a legit harem, then I’ll need to run to the store for some brain bleach.

Captures: Misty’s Horsea – Cute little Horsea….is cute. Other than that, it does mostly nothing and is later kept at the Cerulean Gym and never really seen again once the writers realized how much nothing it does.

Plot: Ash, Misty and Brock find themselves stranded for three hours in Porta Vista after missing their ferry. Misty spots an injured Horsea who draws an odd picture of squid-like creatures with its ink in the water. As Misty’s about to capture it to help treat its wounds, a nearby ship is suddenly smashed in half. The group manages to save the sailors, who have all been mysteriously paralyzed, and they wonder what caused such a disaster.

They bring one of the sailors to his boss, a woman named Nastina, who seems to be Brutella’s doub—Oh I mean, who seems like a really brash character who doesn’t seem related to anyone since I’m watching the dub…..*cough* She’s extremely grateful to the group for saving her sailors, and invites them to check out the new resort she’s building.

She reveals that the construction is being plagued by a swarm of Tentacool, which were responsible for the paralyzation of the sailors. She contracts Ash, Misty and Brock to exterminate the Tentacool with promises of food, money and hotel vouchers. They’re about to agree, but Misty vehemently refuses, disgusted with the thought of exterminating Pokemon, especially a Water Pokemon she adores, such as Tentacool.

They return to the pool that they left Pikachu and Horsea in to see that Horsea is recovering well after Brock gave it a Super Potion. However, it’s still worried about something. They believe that the picture it drew earlier was of a Tentacool and that it was trying to warn them about it.

Nastina announces over a town-wide intercom that she is recruiting the townsfolk for the job instead, and everyone, including Team Rocket, agrees to help out.

As Misty looks on in worry, Team Rocket makes their way to the construction site with a barrel of stun sauce, guaranteed to paralyze the Tentacool and make them easy to catch. However, before they can even get to the site, they’re surrounded and halted by thousands of Tentacool.

Faced with far more Tentacool than they anticipated, Team Rocket panics as their boat is rocked, causing the barrel of stun sauce to fly out of the boat and onto a nearby Tentacool’s head.

This causes the Tentacool to not only evolve into the fierce Tentacruel, but also to make it gigantic.

The huge Tentacruel overtakes the construction site, and efforts to shoot it down are completely in vain. The remaining Tentacool take over the town, and the resulting tidal wave from the Tentacruel moving towards the town floods the area. The Tentacool and Tentacruel commence the destruction of the entire town. One takes control of Meowth to communicate through him, and they find out that the reason behind this attack is the destruction of their home due to the resort construction.

Ash, Misty and Brock try to shoo the Tentacool out of the area with their Pokemon, but Tentacruel easily smacks them away. Pikachu manages to talk some sense into Tentacruel with a desperate plea from Misty being the crux of its decision to leave as long as no more destruction comes to their home. As they’re leaving, Nastina commences her attack with everything’s she’s got, but she’s also smacked away by Tentacruel before it goes back home.

With Porta Vista now safe from the gigantic Tentacruel and the swarm of Tentacool, Ash, Misty and Brock finally catch a ferry off of the island and resume their journey.

– Why exactly didn’t Ash and the others hitch a ride with Delia and Oak on their way out? They didn’t really have a reason to stay after that. If anything, it looked like they left before Delia and Oak did at the end of the last episode.

– Horsea really made those huge drawings with one spurt of ink? Also, wouldn’t the ink just dissipate really quickly instead of stay on top of the water like oil?

– Misty: *lets out her Water Pokemon to help the people from the ship*

Ash: “I didn’t know that you could do that!”

Durr I didn’t know that Water Pokemon could swim or help people out in water. I thought they were bicycles made of ice cream. Durrr.

– Misty: “Don’t just stand around! Go get a boat to help those people!” Guys, for crying out loud, you just stole a boat in the last episode. I know it’s for better reasons this time, but you may end up developing boat kleptomania or something.

– Who the hell is driving the boat in this shot? 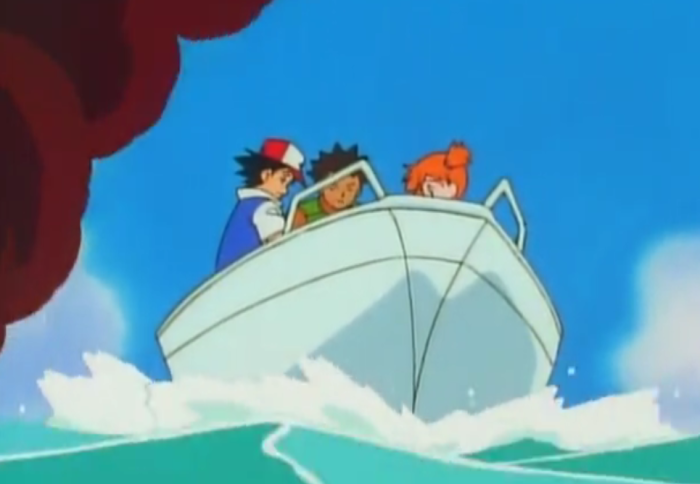 – A moment of silence for the dignity of these men. What exactly made you think she was implying anything about her attractiveness, Ash?

– Why aren’t Ash and Brock more offended by Nastina’s offer anyway? I mean, yeah, the reward is really appealing, but they’re being sent out to kill Pokemon. She specifically said ‘exterminate’. Even if they are seen as ugly and a nuisance to the project, they can’t really be okay with mass murdering Pokemon, can they?

– Alright, fine. Pikachu drinking a drink in an inner tube is adorable. But where did they get that kiddie pool and why put it smack dab in the middle of the road?

– Why is Misty surprised that Nastina’s asking the citizens to exterminate the Tentacool? That is exactly what she was just trying to get Ash and co. to do.

– Nastina seems to pronounce Tentacool as ‘tentacle’ a lot.

– Seems Nastina has lowered her generosity, though, since she took the food and hotel vouchers off the table as a prize.

– I do like seeing Misty when she’s all excited about the sea and Water Pokemon.

– That shot of the Tentacool under the water glowing red like that has always seemed awesome to me.

– Getting hit by a barrel of ‘stun sauce’ causes a Tentacool to evolve?…..and makes it giant? What was in that stuff? Radioactive goo courtesy of comic books?

– That shot of the bishie harem guys getting run over by the Tentacool……Nope, nope. Stop making those connections. Stop.

– I’m sorry, since when are Tentacool Psychic Pokemon? I know the eye beam thing is a real trait, according to the Pokedex, but they can’t control the minds of other beings.

Meowthtacruel: “So you say we’re the spineless ones?!” Well….you are jellyfish….

– Wha, Ash actually refrained from using Charmander in his full-team attack against Tentacruel? Ash made a smart move, everyone! Rejoice!

– Hey, who’s that woman who looks so similar to Nastina and is building something on the beach? Her cousin? Hm, I wonder why that’s a joke. The world of dubs may never know~~~

Like everyone else who watched the dub, I also never saw the episode until much later down the line in reruns, though I believe my first viewing of it was on a VHS. However, I still watched this episode before the ‘Lost Episode’ so the connection at the end to Brutella would still be lost on me until I watched the edited Beauty and the Beach.

Also, I was merely under the assumption that Misty had a Horsea all along and that she just never let it out for whatever reason. Not that it matters – like I said, it’s one of the most useless Pokemon in the series. She barely ever lets it out since it needs water to be out and she rarely battles with it because, well, it’s not that that good of a fighter. Plus, Misty rarely battles anyway.

We basically jump straight from St. Anne’s trilogy to The Ghost of Maiden’s Peak, and since that episode also takes place in an island environment, it doesn’t transition too badly.

I like this episode a fair deal despite the just weird writing choices like the inexplicable giant Tentacruel, Tentacool gaining psychic mind control abilities and the oddity herself that is Nastina. Anyone else think they really wanted to get extra mileage out of Brutella without just making her Brutella?

Misty got a pretty good part here, and her deep love of Water Pokemon is always nice to see. I like how she thinks every Water Pokemon is beautiful no matter how weird they may look to others. It’s a nice little character trait.

I also appreciate that the problem of the week is actually a legit town-destroying threat and not just some mild problem that will go away eventually. Porta Vista is essentially entirely destroyed by the end. Tentacruel also had a legitimate reason for attacking like it did, and it did show that it was a reasonable being with mercy.

Next episode, one of my absolute favorites, The Ghost of Maiden’s Peak. Ash and the others encounter a ghost who is seducing Brock and James at a local festival.