Skip to content
HomePosts tagged 'The only review of this ONA on MAL is a perfect shining couldn't-be-better review and while I can understand arguments for this ONA that is just WAY too generous.' 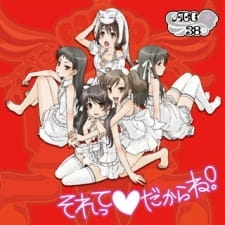 Plot: Released as a promotional ONA for the animated idol group, AGC38, this anime follows a girl named Ayano who is suffering from some kind of terminal illness or condition. Her friends desperately try to convince her to get an operation that could save her life, but she seems to have accepted her fate. However, her friends won’t let her go that easily.

Breakdown: I’m actually a little uneasy about how I feel about this one. It’s an eight-minute web release, so there is no time whatsoever for character development or even exploration. I only remembered two of the girls names by the end and would never be able to pick them out of a lineup except maybe Nene with her weird purple hair rope.

So the focus has to go purely to the story. How’s it fare in that regard?

Ayano has some sort of terminal illness, and her doctor says there’s an operation that they can do to possibly save her, but it only has a 2% success rate. Ayano vehemently refuses to do it.

No matter what her friends do, which is pester her day after day, she still won’t go through with it. I don’t blame her at all. A 2% success rate is appalling, and if there is a 98% chance she’d either be worse off for it or instantly die when she could just live out her sickly days doing what she wants then I completely understand her decision.

Her friends won’t stop asking her about it, though. They bring her gifts everyday and ask her to reconsider. Her closest friend, Nene, soon snaps, slaps her in the face, complains about the fact that Ayano doesn’t understand how they feel about the situation and runs off.

Okay, I understand emotional outbursts in times like this, but that was the wrong way to handle this situation. The slap is bad enough, but she’s actually straight out saying ‘Well, what about meeeee?’ Way to make someone’s terminal medical condition about you.

It takes that and learning that Nene prayed at a shrine for Ayano’s recovery that she decides to do the procedure, which I also find slightly questionable. It makes it seem like she is just choosing to take an operation with appalling odds (odds I don’t even think most doctors would operate on?) just to appease her friend. It’s a sweet gesture, but she shouldn’t feel she has to do something like that.

However, after she decides to have the operation, we get quite a few cute, but really quick, shots that warm the heart like Nene focusing more during archery because she has faith in Ayano, the girls writing ‘Hold out’ outside of Ayano’s hospital with their umbrellas etc.

Then she dies. The end.

……..Oh alright, of course she doesn’t die. That’d be the non-Hallmark Channel version. Instead, she lives, hooray, and gets to go after some guy who hasn’t been seen this entire ONA.

Oh, but we also get 2 minutes and 40 seconds worth of end credits. I will never understand why ONAs and OVAs that are so pressed for time will easily flush a good chunk of it away with credits. Credits are important, but they don’t have to be so long.

Art and Animation: Surprisingly really detailed and fluid for just a short ONA. Ayano’s hair bugged me a lot, though. I just wanted to reach my hand through the monitor and brush it away from her eye. Why does she like it like that?

Bottomline: You’d lose nothing from watching this, especially at a paltry eight minute runtime, but you also won’t gain much from watching it either. It’s a cute little story and a shot or two may tug at the heartstrings, but you don’t know any of these characters well enough for this story to have a true impact, and the fact that the girls are so pushy about making Ayano do the surgery, something which has a much bigger chance of harming or killing her than making her better, is a little off putting.

Recommended Audience: They don’t even show the slap, but it does discuss terminal illness and death, so probably 6+