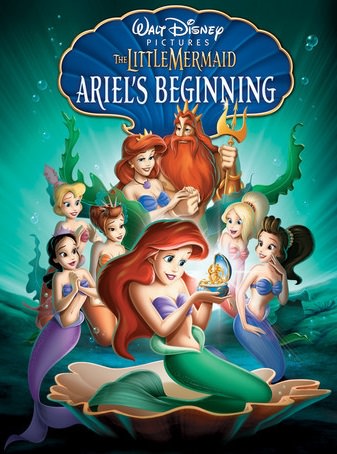 Plot: When Ariel was a child, the kingdom of Atlantica was filled with music and laughter. When her mother, Queen Athena, suddenly died, King Triton, not wanting to be reminded of the pain of losing his wife, banned all music from the kingdom.

Ten years later, the kingdom is dreary and rid of music. Everyone is miserable, but no one dare confront King Triton about it.

As Ariel gets more contemptuous over their situation, the girls’ governess, Marina, desperately vies for Sebastian’s job.

Ariel’s Beginning is the last Disquel to be made, not counting the Tinkerbell movies, follow-ups like the Winnie the Pooh movies or movies based on Mickey and the gang. The last Disquel to be made before this one was Cinderella III (Actually, production on this movie was halted so they could get Cinderella III out sooner. Pbt), and I already explained how weird it was that that movie was so good.

What’s even weirder is the Disquel behind Cinderella III was The Fox and the Hound II……I don’t get how or why these Disquels have such stark contrasts in quality. Did they confirm that they were stopping Disquels in a few years so they decided to have their last two actually be good?

The animation here is definitely the best of the Disquels, even though we don’t get any shots that I would say are particularly amazing or anything (The shot at the end with the rainbow lights comes closest). They still have a budget and whatnot.

The voice acting is great, even Flounder, who almost seems like he’s aiming to be annoying.

The new comic relief is, bar none, the best comic relief any Disquel has come up with. Benjamin is Marina’s assistant. He’s a manatee who is very soft-spoken, almost in a Winnie the Pooh manner, and makes a lot of funny observations. He’s not a comic relief character we get often in Disney or nearly any form of media as this role is typically relegated to loud, obnoxious idiots.

While I am still very hardpressed to tell the girls apart, this movie does give more focus to Ariel’s sisters. Fans of the TV show or books might find them more memorable, but considering they barely get any screentime in the original movie and…..are they even in The Little Mermaid II? I usually forget they’re even there. It was nice to get some more characterization for them, even if a bulk of it is just “Attina’s the oldest and most responsible….and there are five others besides Ariel.”

While I can see many people wondering why The Little Mermaid needs a prequel, it does answer a question many people had about the movie – Where is Ariel’s mother? The answer is, she’s dead.

I would’ve liked more time with Athena because she’s only in the opening scene and barely gets any lines. When her life and death are the main crux behind the conflict of the entire movie, you’d like to get to know her a bit more. All we know is that she looked a lot like Ariel, she was kind, she loved her family, she was deeply in love with her husband and she loved music.

Still, her death sets off the entire plot for this movie, which is good in a writing sense because it’s pretty hard to justify banning music and being so vehement about it.

However, simply banning music isn’t enough of a conflict. We still need a villain. Today’s Disquel villain is Marina Del Rey, voiced by Sally Field, because that’s about as random of a choice as anything. To her credit, Marina is a…fairly entertaining villain – leagues above Morgana anyway, but she’s….probably one of the lamest villains in Disney movies.

Which brings us to the main three problems with this movie.

I give them credit for not trying for another Ursula clone, but that kinda makes matters worse. Unlike Morgana and Ursula, she doesn’t want power or the Trident, she doesn’t even want Triton’s job.

She wants to be a higher grade lackey, essentially. Imagine if they made a Lion King sequel where the villain was trying to overthrow Zazu. It’s on that same level of ‘huh?’ It takes her until the very end of the movie before she even feels compelled to kill Sebastian.

She doesn’t have any sort of magic powers. The best thing she has are a team of electric eels, which are nowhere near intimidating enough to carry her. Having your main driving force being lackeys never works.

Marina’s also very showboaty and loves to wear flashy dresses, much in the same realm of a showgirl. While you could say similar things about Morgana and Ursula, they at least had the power to make it seem like they were justified in their egos, making them seem kinda badass (Ursula anyway). The showgirl thing is just part of Marina’s character, which is fine, but doesn’t seem very unique.

The Wiki compares her to Yzma (and Benjamin is, likewise, compared to Kronk), which I can see, but at least Yzma was murderous, kinda scary, has some form of magic powers and wanted the job of empress.

2) For a movie trying to highlight how grand and powerful music is, their soundtrack is not as good as it should be at all.

Compared to the other Disquels, it’s very good, but if you want me to be entranced by beautiful music, you have to have more original music in the movie, particularly lyrical songs.

There’s Athena’s Song, which is very good and a great opener to the movie.

Then there’s our villain song, Just One Mistake, which is not good as a song, but is sung just fine by Ms. Field.

Ariel’s song, I Remember, is also very good. Thank you for finally letting Jodi Benson have a song after she was robbed in The Little Mermaid II. God forbid the character known for her beautiful singing voice be allowed to sing.

Finally, we have I Will Sing, which is a non-musical number song performed by Jeannette Beyardelle, which is fine.

Other than that, we have covers of samba songs, which eat up the rest of the music-oriented parts. I have nothing against mambo, calypso, samba, etc. In fact, I enjoy them, but when you’re listening to Jump in the Line (Shake, Shake, Shake, Senora) for the third time in a row, I get kinda irritated. Also, we have an instrumental cover of Man Smart (Woman Smarter) and I couldn’t even tell it was a cover. I thought it was just random calypso music.

3) The story can be seen as a rehash of the original movie + The climax bites.

Something Ariel likes is strictly forbidden.

Her father is seemingly being unreasonable.

There’s a scene in which Triton destroys a sanctuary dedicated to this forbidden thing.

Ariel has a heated confrontation with her father about this and runs away because of it.

Triton and Ariel make up after she realizes why he was so adamant about forbidding the forbidden thing and Triton realizes he was being too harsh and restrictive.

Someone’s killed by a boat.

All of these things happen in Ariel’s Beginning, but I’d be remiss to say this movie is a rip-off of the original. It’s certainly reminiscent, but not nearly as rehashed as some other Disquels.

Something odd about this movie is, despite taking place a year before The Little Mermaid, Ariel actually seems a little more mature, intelligent and reasonable than she is in The Little Mermaid. Also, no, we don’t get a prequel explanation as to why she’s so enamored by human stuff, BUT we do get a prequel explanation as to why Triton hates human stuff so much.

The aforementioned boat death was Athena’s death scene. In the beginning of the movie, Triton, Athena, the princesses and many Atlaneans….no that’s for Atlantis. Atlanti…cans? Atlanticers?…Atlan….fish were enjoying some time in a lagoon, singing and playing along. Triton gave Athena a beautiful magic music box, which had images of Triton and Athena dancing together within it.

A pirate ship came by, and while everyone was trying to run away, Athena was attempting to save the music box. The ship crashed into her, the music box sunk and Athena passed away. While they never outright say this in any of the movies, probably because it would’ve been difficult to show it in this movie and Athena’s story hadn’t been made in the original movie, it can easily be surmised that Triton grew to hate humans because they were responsible for his beloved’s death.

In regards to the climax, it’s incredibly weak. It is, by far, the worst part of the movie. Marina sics her electric eels on Ariel and Sebastian to keep them from making her lose her job (even though, considering her job involves caring for the princesses, having one die on her watch likely would’ve gotten her fired anyway)

The eels pointlessly stare at them for eons after having them cornered, Flounder, of all characters, saves them. Marina basically has a comedy face-off with Sebastian and, while stuck in a rock formation, tries to crush him, but ends up creating a death fake-out with Ariel, which is pointless because, being a prequel, we know she’ll live.

Then she straight up vanishes, Entirely. The plot forgets about her until the end credits, which suddenly get interrupted by her in prison. It’s like they forgot to include an ending for her until they were already editing the credits together.

Benjamin’s her prison psychiatrist for some reason. The end.

While these problems are very apparent, I still have to say this is one of the best and most enjoyable Disquels by a long shot. It might even contend TLK2 for top spot, and I never much cared for the original Little Mermaid. It has pretty good sentimentality, some good humor (I loved the scene where Marina parodies Ariel’s crescendo scene on the rock, even if it has been done many times by this point, and doesn’t make sense given that this is a prequel, thus Ariel hasn’t done that yet) and a good deal of fun. If the ending was either much darker or had about 20x more action, and it had a more serious or threatening villain, it’d definitely be the best Disquel.

Recommended Audience: They do say the dreaded d-word (died) and one character dies kinda off-screen-ish but other than that, nothing. 5+