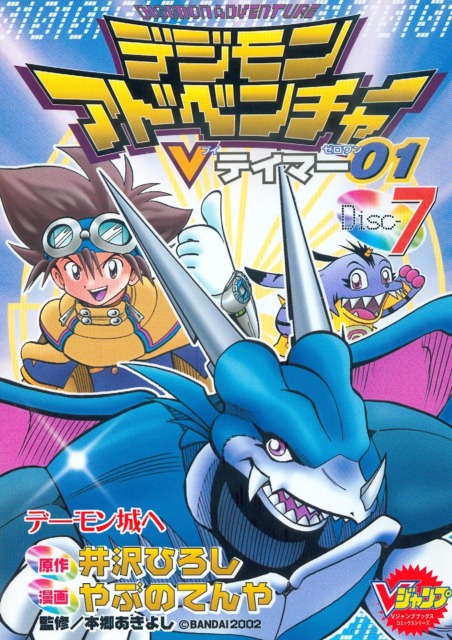 Meanwhile, the other Aliases, now imprisoned by Neo, give Rei a chip with Arkadimon’s data on it. If Zero and Taichi can use that data, they might have the advantage they need to win.

Taichi and Zero leave an unconscious Rei in the hands of Gabo as they set off towards the castle to stop Neo once and for all.

One last minor story element is solidifying that Neo really doesn’t seem to give a crap about Rei or making a world for her to walk in – he just wants both worlds under his thumb for himself. We already knew that, but there is 100% no signs of remorse or caring in his face. It’s just the same cocky smirk he always has no matter who was talking to him or what they were saying.

I guess I can understand why they skipped Tamers, because it’s not set in the Digital World, but they do go there in later episodes. You could write something to make it work.

The bonus chapter is the best thing in the volume. Even though I’m not a huge fan of Frontier, it was nice to see the generations come together….though that does raise a metric ton of questions in canon.

Takuya is upset at Koji for taking the last hit in a battle where he did most of the damage (and loot distribution is complete BS when it comes to last hits.) Koji cooly brushes him off and explains that he hates attitudes like his. Takuya goes off to pout only to be transported by a Jijimon into a weird parallel Digital World that is being ruled by an evil Metamorphmon, who can copy any Digimon’s data and transform into it, restoring its power to full when it does.

Jijimon summoned two saviors, Taichi and Takuya, to save them. Takuya, at first, thought that Taichi’s and Zero’s fighting arrangement was terrible. Why have a Tamer and a Digimon when you can be the Digimon and fight on your own? He thinks Spirit Evolution is much better since you rely on your own strength to fight.

Takuya thinks back to the earlier battle with Koji and realizes that it was better for Koji to take the final hit because he wasn’t paying attention to his surroundings and could’ve been attacked without warning. Koji was trying to have his back, and he saw it as taking the spotlight in a battle when battling isn’t about being the strongest or getting attention.