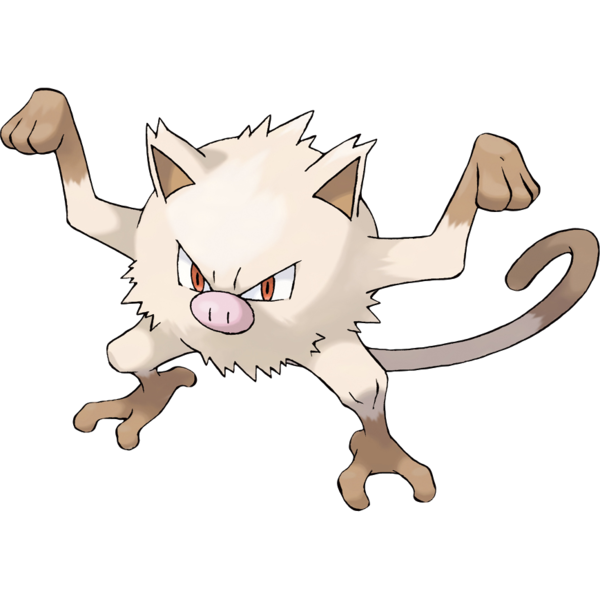 Name: Mankey’s name is either a mix of “Man” and “Monkey” or “Mad” and “Cranky.” I think they’re kinda reaching for the latter theory, and, honestly, the former doesn’t sit right with me either. I always just thought they were lazy and changed one letter of “Monkey” to make it seem new.

Mankey’s name is fine. The word “Monkey” is already pretty funny, and changing it up a bit allows it to retain the snappiness and most of the humor in the word. I just think it’s kinda lazy, is all. Mankey’s name is kept from the Japanese version. No real fun facts today either.

Design: Mankey’s design is a bit unique in that I both find it very bland and overly weird. At face value, it’s just a brown and beige monkey, which is the boring part, but then you look closer at it and it’s weird.

First of all, I wasn’t rooting for Mankey to have realistic hands, but there’s something so weird about a monkey having paws for hands. Monkeys are supposed to be all about climbing and hanging from things, and paws just don’t work very well for that. The way it looks in the main artwork, it’s like the paws don’t come off as normal paws immediately. It looks like his ‘paws’ got broken and they’re bending in the wrong direction. They’re not, but that’s how it always came off to me.

Second, its face. I’m fine with the angry eyes, He’s supposed to be an angry little shit, and he is able to easily have cute expressions. It’s his nose that weirds me out. Apparently, his pig snout is supposed to be similar to baboons, of which Mankey’s design is partially based from, and uh…..I don’t see it. I’ve never seen any monkey-like animal with a pig nose. They have pronounced and long snouts, but they don’t come off like pig noses. Then there’s Mankey’s mouth….of which it has none. It does have a mouth since it can eat, but it has no visible mouth, and that just compounds the weirdness.

Finally, we have Mankey’s feet, which are also not hands, but they’re a tiny bit better in being Y shaped grabby feet. While being more practical, they also just seem very weird. It’s like someone fused bird feet with monkey feet.

In hindsight, it’s very strange that the main theory around Mankey’s name is that it’s a combination of “Man” and “Monkey” when they took pretty much anything human-like away from any monkey’s features in order to make this design. No hands, no opposable thumbs, no human-like body shape, no human-esque facial features (they even gave it tiny pointy cat-like ears) absolutely nothing. They went out of their way to remove those typical features, and I’m not saying it’s all bad, it just creates a bit of a mish-mash of confusing feelings.

Sprite-wise, RB is…..*sigh* My feelings are confused again. Mankey obviously looked a bit different back in the day. It gives off way more ‘pig’ vibes given the weird shadow around its face, but it’s still clearly monkey-like. And that back sprite is so weird. I keep thinking Mankey’s standing on its hands.

Yellow is a bit more normal, but RG is back to being more pig-like.

Everything’s about average until Gen III, where Emerald has a pretty cool animation. Makes it look like it just won a fight or something.

Other than that, I don’t have any other notes, good or bad.

I’m confident in saying Mankey’s shiny is one of the worst in all of Pokemon. It’s either a muted baby poop green or it’s a muted pea soup green. Either way, it looks more like Mankey is horrifically sick than shiny. At its best, it can come off looking lime green, which is a little better, but still not by much.

Dex Entries and Backstory: The Biology section of its Wiki explains that it’s similar to New World Monkeys, and look at these horrifying motherfuckers. 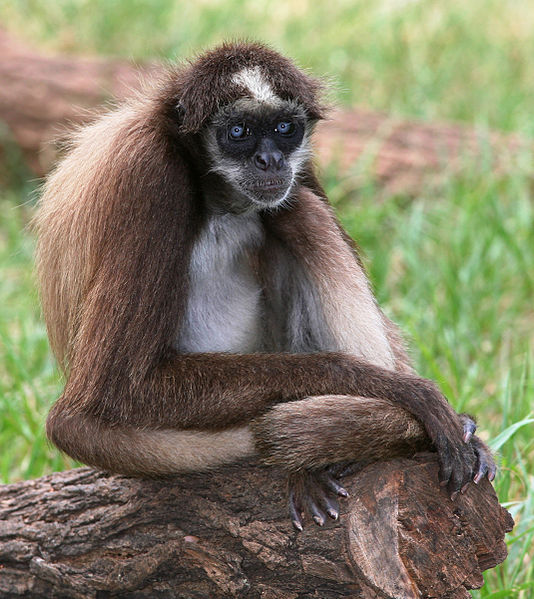 They are the stuff of nightmares.

Mankey are incredibly angry all the time, and they’re very quick to attack and become uncontrollably violent. They breathe heavily when getting enraged enough to attack. It will attack until it’s exhausted and then go to sleep only to become enraged in its dreams and wake up angry again. It can’t distinguish from friend or foe when it’s on a rampage, and they travel in such tight packs that, when they lose sight of their pack members, they become enraged by loneliness.

An interesting and, I would think, incorrect statement they make in the Dex entries is that, because it is constantly releasing stress by being violent, it lives a long life……I don’t think that’s right……or a healthy message to send kids. No, you shouldn’t bottle up your emotions, even anger, but I can think of few Pokemon who are worse poster children for that message than Mankey. Yes, kids, go and lash out at anyone you see whenever you want. Hit people, break things, it’s the health way of dealing with stress.

Ash’s Pokedex also says it packs a powerful punch, which I don’t doubt because it’s a Fighting Pokemon, but can a Pokemon with those paws really “punch” anything?

Mankey’s design is seemingly based on baboons and Japanese macaques. 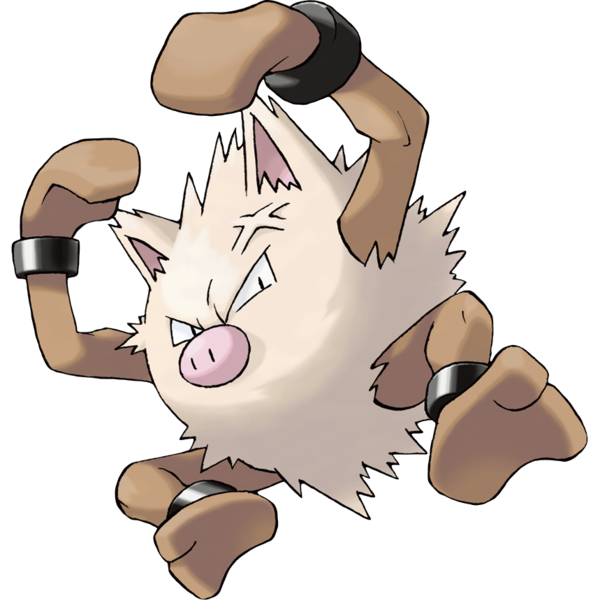 Name: Primeape’s name is okay. It’s basically as one-note as Mankey, again being one letter (or….I guess two) off from the word, but Primeape is a bit more unique. It’s obviously a combination of “Primate” and “Ape.”

Its Japanese name is Okorizaku, which translates to “Angry monkey.” Really went all out on the imagination there, eh? It’s also kinda a clunky word, to be honest.

Design: I like Primeape’s design a little better than Mankey’s, but, when you get down to it, there’s not much of a difference between Primeape and Mankey. It loses the tail, gains some semblance of hands and actual feet, which I appreciate. It also, somehow, gets metal wrist and ankle shackles. But otherwise it looks pretty much the same as Mankey. 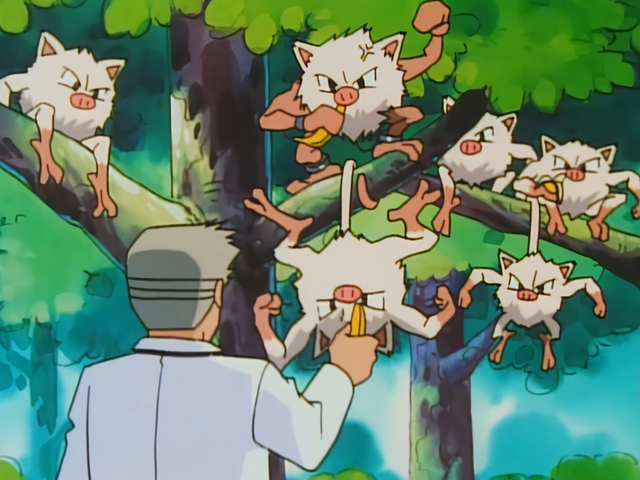 Otherwise, I don’t have a whole lot to say. HG/SS definitely has the best animation. They’re all trying to do the same kind of tantrum animation, but they’re not pulling it off. Emerald looks like it’s dancing, DPP looks like it slipped on butter. HG/SS actually pulls it off well.

Primeape’s shiny is arguably even worse than Mankey’s. However, the awfulness fluctuates depending on the Gen. Like Mankey, it has a very baby poop green look to it overall, but he looks horrible – absolutely horrible – in Gen III where he’s now Graham cracker brown and a deep baby poop green. That is definitely of the worst shiny sprite sets in all of Pokemon.

It looks a tiny bit better in Gen IV because it looks more lime green, and Gen V pretty much keeps the same shade, but after that it’s just back to grossness.

Dex Entries and Backstory: Almost all of the notes and Dex entries are pretty much just Mankey’s only more angry. Like in the anime episode with Ash’s Primeape, if you lock eyes with it, it will never stop chasing you in an effort to beat the crap out of you.

I was about to write off all of Primeape’s Dex entries and notes as being more or the less the same as Mankey’s until I got to its Dex entry in Sun where it says, “It has been known to become so angry that it dies as a result. Its face looks peaceful in death, however.”

…..First of all, holy shit, Pokemon. That was dark.

Second of all, that’s in direct contradiction to what they said in Mankey’s Dex entries where it said it has a long lifespan because it’s constantly letting off stress and anger.

This entry only made me more confused when we got to Ultra Moon where it says, “The blood vessels in its brain are sturdier than those of other Pokémon, so it can stay healthy despite its constant raging.”

Which is it!? Is it a heart attack waiting to happen or is it super healthy? I don’t get this at all.

And that was the monkey line. Had more to say than I thought I would, but I still didn’t wind up saying a lot. They’re fine Pokemon. They definitely wouldn’t be my first choice of Fighting Pokemon, not even in Gen I….Actually……They’d probably be my last choices in Gen I of Fighting Pokemon. Literally every other Fighting Pokemon seems more appealing than these two. My favorite Gen I Fighting Type was always Hitmonchan, but I also really like Machoke and Machamp, and Hitmonlee has definitely grown on me. Machop’s probably closest to the bottom in Gen I, but I still prefer it over Mankey and Primeape.

I will admit that they can be entertaining when they’re goofing around, but that’s about it.

I don’t even have any nostalgic connection with Primeape considering Ash had one because he only used it literally once and then just left it with some guy he barely knew for no real reason forever.