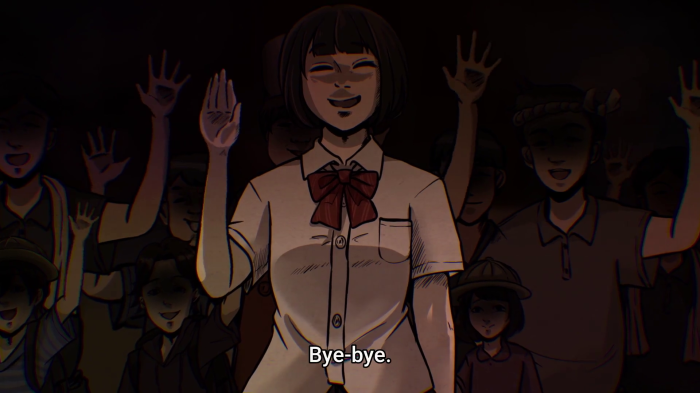 Plot: A pair of friends are on a trip where they wander into a weird local town.

Breakdown: I’m not gonna lie. I was laughing through most of this episode. The constant “Bye bye!” easily tickled my funny bone. I couldn’t stop laughing until the credits.

That doesn’t mean there isn’t a decent degree of creepiness here, because there is….but it is terribly overshadowed by how funny it is. Maybe that’s just me, though.

Other commenters seem to not be too impressed by this episode. I do agree that, even without laughing at the “Bye bye!”s the episode isn’t that great, mostly because it’s one of those stories where I can’t really make sense of it. So they enter a town, all the people say “Bye bye” over and over and it causes someone to…be…possessed? Or they say “Bye bye” because the possession is already happening and they’re saying “Bye bye” to the person since they’ll be pushed out by the spirit or demon that’s possessing them?

Without the “Bye bye!”s this episode just amounts to ‘Someone got randomly possessed. The end.’

There is creepiness in the visuals and audio, but that’s about it. 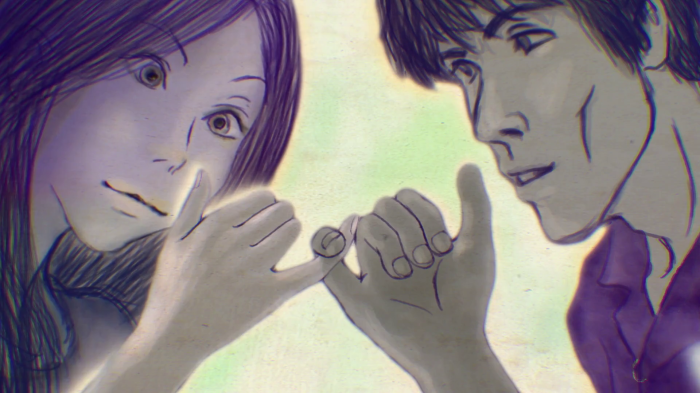 Plot: A woman becomes very concerned when her husband starts acting strange and distant. He explains that he’s experiencing weird dreams of another world with another family, and he can’t stop thinking about them.

Breakdown: This was another episode that I think was very well written and executed. Not sure how scary I found it, but I enjoyed it quite a bit.

The twist, spoilers by the way, at the end is really good, and it leaves just enough to the imagination to make you question which world was actually real. If you ask me, it makes the most sense that the world we were following was the dream world. It would explain why he was always full after eating in the other world and why he seemed so despondent when he was with the wife we were following instead of being as lively as he is in the “dream.” I also can’t imagine that her existence is entirely reliant on her husband remembering her unless she’s the dream. If he really did choose the dream, I’d imagine he would be locked in a coma or disappear himself or something.

The coloring would also make more sense. Before the twist even came up, I noticed the wife we were following had a weird paleness and blueness to her, even in her lineart, but it wasn’t so stark in comparison to the rest of the artwork that I felt it was that strange. End of Spoilers

This episode isn’t really scary or even creepy, but I guess it would be very concerning to watch your loved one slowly spiral into a state of detachment all because they seem to be enjoying their life in a dream better than the real world.

Plot: A group of friends perform a hyakumonogatari – a ghostly ritual where you light a hundred candles, tell a hundred ghost stories and blow a candle out after each story. When you blow out the final candle, something is supposed to happen, but what happens is a mystery.

Breakdown: I want to point out that this episode is not the 100th episode of Yami Shibai. That would neat – but it’s not.

However, there is speculation that this episode is the finale to the Yami Shibai franchise. I have no idea if this is true. As of this writing, a Yami Shibai 11 hasn’t been announced, but if it did end like this…..I’d be okay with it.

For a series all about telling ghost stories, we don’t have nearly enough episodes about people telling ghost stories. I think a problem with those types of stories is that they’re typically not written really well, and a lot of them go the same way. The group will tell pretty lame stories, someone will walk off because it’s so lame and then go missing and blah blah blah.

This story, however, is pretty good. It got me with the atmosphere, and the ending twist was something I didn’t expect, especially when twist took another twist, which I thought was really cool.

First of all, the opening makes it seem like the narrator is….dying or something? Every episode, he’d normally say “It’s time for the theater of darkness” (Yami shibai no jikan dayo) and yet, in this season, he keeps audibly fading off when saying that. (Yami shibai no jika……)

Second of all, the ED shows the narrator in an empty theater before removing his mask, placing it face down on the floor and walking off into the shadows. His face is never shown, but the inside of the mask is, and it’s gross. It looks like it’s got flesh inside of it while also having bloodied sutras/talismans of some sort.

In this episode, the mask turns back over. What that implies, I don’t quite know, but it’s kinda cool.

Spoilers – The twist after the twist was that the narrator showed up when the final candle was blown out. He started telling the tale of the teenagers who were in the room telling ghost stories. I thought that was a really cool and clever way to incorporate the narrator into an episode. It was also a really interesting way to close out the franchise, if this is indeed the end. End of Spoilers

All in all, I really liked this episode, even if a small group of people telling a hundred ghost stories in one night while none of the candles seem to melt even a little is a bit weird. As a season finale, it’s really good. And if it’s the series finale, then I’m sad to see it go, but I think this entire season was pretty strong, and this was a fairly suitable ending for it. I won’t call it dead quite yet. Yami Shibai has a habit of just coming out of nowhere when you think it’s gone. Hopefully see you next Halloween, Yami Shibai. Thanks for the spooks!

If you enjoy my horrifying work and would like to show your ghoulish support, please consider offering a financial sacrifice at my Ko-Fi altar. Every offering goes to helping me combat evil money-sucking vampires known as ‘bills’ and keep this blog from becoming a ghost. Thank you! 🎃

Episode 1: A Job to Quit

Plot: A man asks his friend’s advice on quitting his job when he shares an emotionally draining aspect of his work.

Our first episode of this season involves mannequins, so we’re already starting strong. A man works at a mannequin factory with the specific job of checking for defects. The defects in question are any mannequin heads with the ability to talk. He is forced to throw the mannequin heads into the incinerator if they can talk, forcing him to listen to their screams as they melt away. He asks his friend if he should quit his job because the emotional turmoil is getting to be too much for him, and that’s about all I feel like spoiling for this one.

I think this is a very strong episode to start us off on. Some really creepy visuals, some legitimately scary screams and it fits very well within the five minute format. It, for once, doesn’t leave off on a cliffhanger. I really enjoyed it.

Our opening this season is a rather blasé shot of the narrator in an empty playground presenting the story to no one. The ending is much more interesting. It shows the narrator in an empty auditorium and he takes his mask off as he’s about to leave. While we don’t see his face, we do see the inner side of the mask, and it’s all dark and has a few red seals in it.

The ED is okay. It’s a bit of a rough listen because it’s mostly just acoustic guitar with vocals. It’s like someone threw it together on the fly. But does that make it bad or does it add to the unsettling ambiance? You be the judge.

Plot: A trio of siblings clean out the apartment of their estranged father after his passing until they find a heartbreaking note.

Breakdown: Excuse me. Let me just pick my jaw off the floor.

Sometimes, Yami Shibai can be quite sweet. In certain stories, the darkness of the tale lies in the sadness and tragedy or the bittersweet situation – not in horror. I really thought this one was heading in that direction.

Hoo boy, was I wrong.

I don’t want to spoil this one either besides saying that I’m not 100% certain on how much I like the twist at the end. It was indeed creepy and definitely shocking, but it was one of those endings where I ultimately felt more sad than anything. That’s not a bad thing, though, so I don’t know if I can find it within myself to ding it for that.

Overall, this episode was certainly well-written and managed to throw me for a loop in a fairly good way.

So far, I’m quite impressed with how this season is turning out, and it seems many fans are having similar responses. Hopefully, the season maintains this momentum throughout the entire run.