Plot: Shaggy, Scooby, Daphne and Fred are helping put on a Christmas pageant for a bunch of children. An old scrooge arrives named Mr. Nickelby, and he declares that he plans on kicking them out of the building immediately. They resist all of his attempts, but a meddlesome ghost appears who is seemingly on Nickelby’s side. Can the Scooby gang figure out who this ghost is and stop Mr. Nickelby or will the pageant, and Christmas, be ruined for the children?

Breakdown: There are several Christmas specials in Scooby-Doo’s long, long history and this….sure is one of them.

Look, I love Scooby-Doo, I do, but there’s no denying that they can produce some stinkers, and this one is quite ripe.

First things first, this special took place during the ‘Fred and Velma are inexplicably gone for five years’ period of Scooby-Doo. They each have a role in a couple of specials during this series, but it’s the only time they appear in that five year span. Fred appears here, for reasons not given, but Velma does not, which doesn’t bode well for me because Velma’s my favorite character.

Yes, lose Fred and Velma but keep Daphne and bring in Scrappy. Logic is fun.

As for why Fred and Velma were booted from the franchise for so long, I have no clue. It was stated in-universe that they supposedly got jobs outside of mystery solving, which makes some degree of sense, but as for why they were written off in a meta standpoint, I don’t know. Some people are theorizing it had something to do with the likability of the characters, others said it might have been trouble with their voice actors – who really knows?

Secondly, this set up is so ridiculously overly done, even for 1984. The little children (who may or may not be orphans, it’s never really made clear) are participating in a Christmas pageant in a ‘building’ (no idea what this building is either) and some literal scrooge (he even looks the part and says ‘humbug’) threatens to kick them out and ruin their Christmas.

I had to pause when they had the little girl react to this news because they actually put in that stock sad violin music to really drive the emotion home.

Third, the reasons behind him doing this make no sense. The only motivation he has for wanting this building, that his family previously owned, is because a huge emerald was left to him in a will (supposedly by a family member who owned the building) and it’s in the building somewhere.

Uhh….Just ask for it? If it was left to you in a will, then no one else can lay claim to it even if they own the building. Just ask ‘hey, guys, can I look for this emerald my family member left me? Then I’ll be on my way and not ruin Christmas.’ They’d probably be cool with it.

Why does he not own this building by the way? Did the family member sell it before they died? Why leave this seemingly priceless emerald in the building if they did sell it?

The location of the emerald makes even less sense. His family member left behind a riddle to its location, because of course do that instead of doing what a sane person would do and just, ya know, be upfront about it. The riddle says;

“On Christmas eve, your goal’s not far.

You’ll find the emerald in the pageant’s star.”

….So….they wrote that riddle after they were already making plans to put on this pageant? Which was, what, one or two weeks, max? Is this family member even in the ground yet?

So, by that logic, this probably-not-even-cold-yet family member’s last act should have been shoving an emerald up Freddy’s ass.

What would they have done if someone threw away this seemingly inconspicuous nutcracker toy?

The resolution is also lame. The ghost was Mr. Nickelby’s French maid, who somehow completely loses her heavy accent when she’s playing the ghost. Admittedly, she’s the funniest one here as she dusts literally everything and everyone with her feather duster, but her only motivation was ‘Ooh emerald valuable. I want it.’

Mr. Nickelby is also changed instantly because the little girl from earlier saves his cat. Yay, I guess. They still ruined the pageant, but he brought Christmas gifts for all the little boys and girls and tore up a condemnation order he had done on the building, which isn’t how that works, but everyone’s happy.

This special had a few good moments and some decent humor, but the story is bllllllaaaaaaaaaaaaaahhhhhhhhhhhh and badly written blah at that. I don’t recall seeing other Scooby-Doo Christmas specials, but there have to be better ones that this.

At the very least, the theme song is really groovy…..until you realize that it sounds horribly dated for a mid 80s show. It sounds like it’s stuck in the 60s or 70s.

And somehow it really seems like the animation has only gotten worse since the first series, and that’s saying something.

Fun Fact: Despite what I just said, I have owned a battery-operated Christmas Scooby-Doo doll for about 15 years now. Still works, but it’s weaker than it was. It sings Christmas songs and wags its tail. It’s super cute. 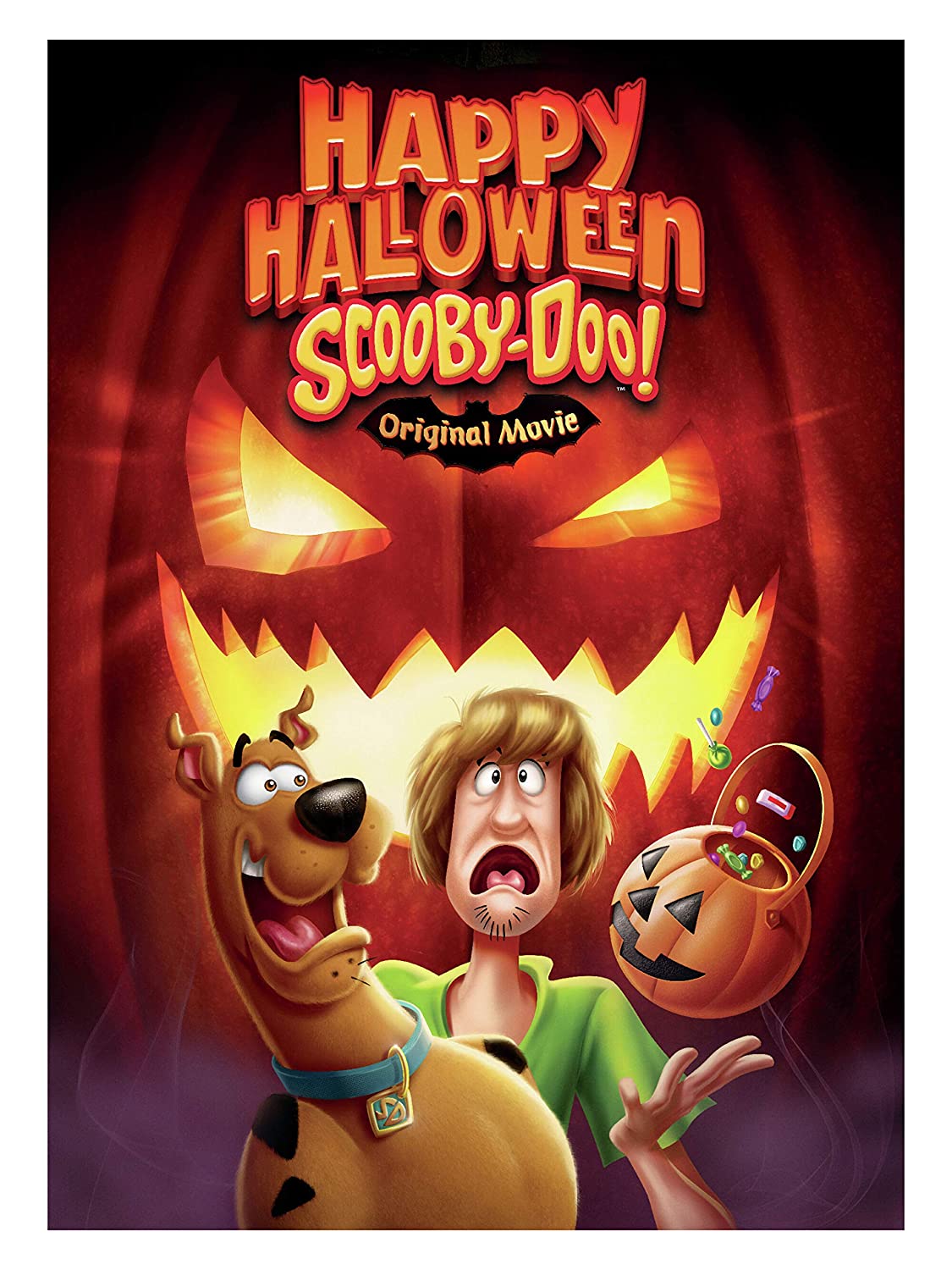 Plot: The Scooby gang enjoys Halloween while doing what they do best – solving mysteries. However, things get a little complicated when a local pumpkin patch turns into monstrous creatures bent on destroying the town of Crystal Cove and turning everyone into jack-o-lantern creatures.

Breakdown: Modern day Scooby-Doo is a weird area to venture into. I mean, granted, Scooby-Doo has always been kinda weird, but the way that the franchise has changed over the years, for better or worse, is both difficult to watch and kinda welcome at the same time.

Scooby-Doo tends to be very meta nowadays, and they’re constantly using self-referential humor. They also try to keep themselves modern as much as possible in their writing, which, again, sometimes works and sometimes doesn’t.

They also just tend to run with the idea that Scooby-Doo can crossover with pretty much anything. They’ve had crossover events with the WWE, Lego, Batman, Supernatural (I still can’t believe they pulled that off) and even, I’m not lying, an entire movie with Bobby Flay as a main character called Scooby-Doo! And the Gourmet Ghost….

Speaking of Batman, I really forget sometimes that actual Batman is a part of the Scooby-Doo universe, and what better way to remind me of that fact than by having the villain of the opening scene being Scarecrow….in his Scarecrow outfit….while wearing a different Scarecrow costume on top of that?

And this isn’t just a flippant fly-by cameo either. He’s a significant part of the entire movie….So are Bill Nye and Elvira, but that’s besides the point.

Now, I’m not saying them upping the weird ante is bad. Sometimes, the dialogue is a little cringey, but I actually tend to enjoy myself a lot whenever I watch a modern Scooby-Doo production, whether it be TV shows or movies….although I did hear Scoob! sucked……Anyway, they always tend to have snappy writing, good jokes, fun moments, good character interactions (And I like how they’ve changed the characters over time.), decent animation, good music, and even legitimate scares. All of those apply in Happy Halloween, Scooby-Doo!

Even if most of the movie is a big chase scene, it’s a fun and exciting chase scene that seems to have real stakes.

Although, I do have to say that the ending reveal didn’t make a lot of sense.

I’m not going to mention who the culprit was to avoid total spoilers, but Velma was actually right. Despite seeing many real monsters and supernatural events over the years, she refused to believe the living jack-o-lanterns attacking the city were real. And they weren’t. They were just drones. How they never managed to find that out for themselves, I have no idea. They smashed so many of those jack-o-lanterns, there’s no way they didn’t discover a drone or parts within some of them. They just squish like any other pumpkin.

I might just be splitting hairs there, but in a series meant to be about using logic to solve mysteries I think it’s appropriate to nitpick sometimes, even if it is Scooby-Doo.

Overall, this was a blast to watch, and it really got me into a Scooby mood and a Halloweeny mood. My biggest complaint is that, yeah, some of the dialogue and jokes, especially where Daphne is concerned, are kinda cringey. I mean ‘torch-splaining’? Using ‘Mary Sue’ as if it’s a compliment? Saying “friendship is OP.”? Come on.

If you’re a Scooby-Doo fan, this is a great watch around Halloween, and I really recommend it.