Plot: Yugi and the others stumble upon some fish cooking on a cliffside. Thinking with their stomachs, and not having eaten for hours, Honda and Jonouchi quickly go after the feast. The owner of the fish, the ocean-based duelist Ryouta, confronts them. After finding out who Yugi is, he eagerly treats them to a meal and then demands a duel as compensation. Can Yugi beat the creatures of the deep or will the power of the ocean overcome him?

I agree. If Pegasus wasn’t going to cater the tournament, he should’ve at least told the participants to bring food…..Then again, I wouldn’t go to some strange island for three days without any food, especially if the invitation didn’t mention catering. Also, dub!Yugi, why would there be burger stands or restaurants on Pegasus’s private island where the only house is his?

Honda’s survival book cover has the evil language of Japan on it, so it got turned into rectangles. What? You can’t read rectangles? This is why you should’ve gone to college. 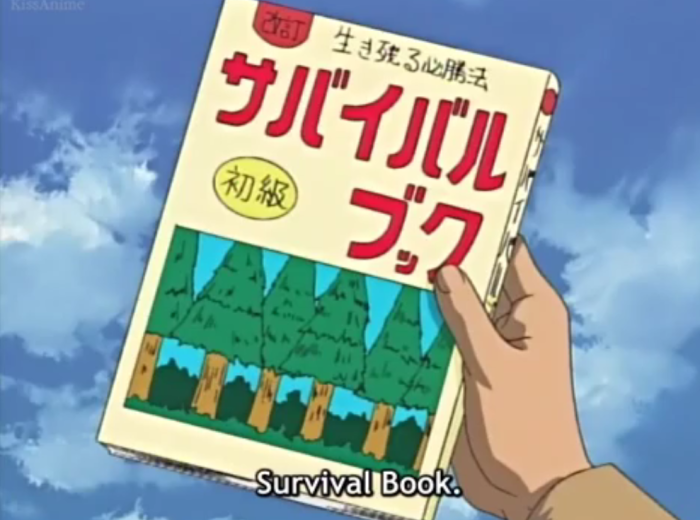 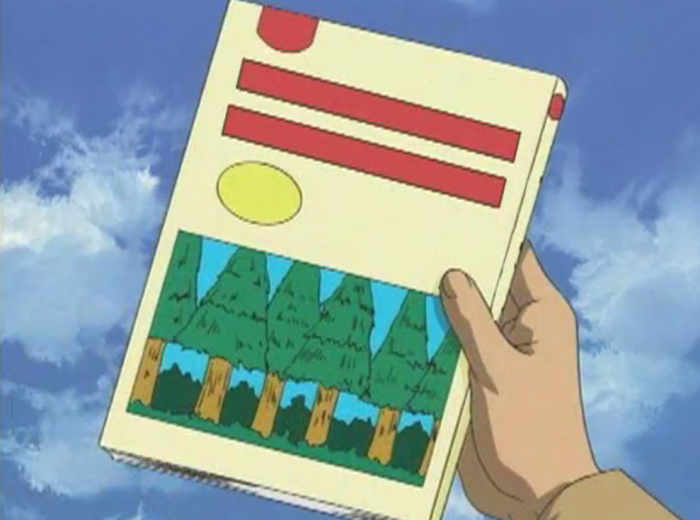 Name Change: Ryouta Kajiki is changed to Mako Tsunami. Like Ryuzaki and Haga, his name is also a pun in both versions as Kajiki is a blue marlin. It’s also apparently the name of a typhoon, which adds to the pun.

Jonouchi justifies his stealing by saying the fish must be a meal prepared for them by God. Well, religion and all that so Joey just says he’ll eat first and ask questions later.

Mako’s getting the Joey treatment when it comes to his tournament rank. He came in third in the tournament that Joey participated in (Shouldn’t Jonouchi recognize him then?) In this version, Yugi just says he’s the top ranked ocean duelist (Out of how many? It can’t be a saturated field. He’s the only ocean duelist I’ve ever seen). Also, considering Yugi’s already beaten the champion of that same tournament, it kinda takes away the tension.

Ehhhhhhh wait a minute. Mako basically challenges Yugi to a duel right after he finds out who he is. “It’ll be my honor to duel you!” “Same here, Mako” basically insinuates a challenge and acceptance. This makes his infamous harpoon throw at Yugi even less necessary.

How did Yugi and Mako get onto their dueling platforms? The arena is like ten feet from the cliff and it’s jettisoned out about 70 feet from the water. The arena doesn’t extend a bridge, so what the hell?

At this point, I’m starting to get annoyed that Yugi constantly calls out Yami to help him in duels. Does Yami just burst out to steal Yugi’s limelight or is Yugi just lazy? He hardly ever duels on his own, and, if he does, Yami has an inner monologue running to help him. The more he does it, the more it seems like Yugi cheats…

Ya know, Yugi, an intelligent duelist would put their monster in defense mode if they were facing a monster they couldn’t see. Just sayin’.

I understand that tying up Mako/Ryouta was to save him from falling into the ocean, but what if the boat capsized? Then he’d be trapped, have no way out of the boat, and then he’d drown.

For some reason, they flipped the screens of the clouds coming in….no comment.

Death is a big no-no – Ryouta’s dad obviously died during that storm in the flashback. Ryouta wants a boat so that he can take on the sea again. In the dub, Mako says he noticed the lifeboat was missing when he washed up ashore and knows that he’s alive. He wants a boat to go out looking for him.

Both versions have this – you can’t attack spell cards unless it’s a specific effect of a monster or spell card. So, technically, Yugi cheated again. Though, considering this is season one, I guess it’s not the worst….That’ll come soon. Also, the moon barely affected the water when it came out on the field, but destroy it and all of the water leaves?

This episode was okay. Mako’s fairly entertaining, and his backstory is pretty sad. His story in the dub amounts to nothing, which sucks because you’re left wondering if Mako will ever find his dad.

Next episode, a mysterious star chip thief is roaming the island, and it’s Kaiba’s little brother Mokuba. He wants revenge on Yugi for defeating his brother and he’ll do whatever it takes to do so.