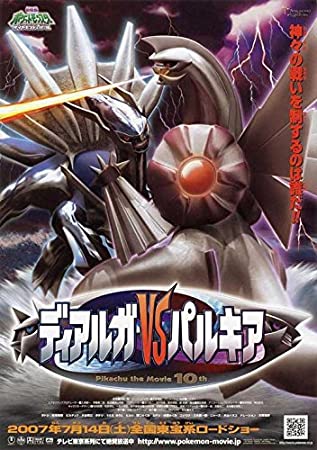 Plot: Satoshi, Hikari and Takeshi arrive in Alamos Town – the location of Hikari’s next contest. Along the way, they meet the balloonist/musician, Alice, and her childhood friend, Tonio, who studies energy abnormalities. As they get a tour of the local gardens, they meet Darkrai, a powerful Pokemon who induces nightmares. He seems to be terrorizing the area, but they don’t know what he wants.

Little do they know that a fierce battle between two deity Pokemon, the master of space, Palkia, and the master of time, Dialga, has started in a dimensional rift. When these two massive powers clash, it’s only a matter of time before reality as they know it starts to fall apart.

Breakdown: Gauging from Dogasu’s Backpack entry for this movie, it seems it got away mostly unscathed, so I might not have much to talk about today, but, nevertheless, let’s see how the original Japanese version of Rise of Darkrai hits with me.

The opening is less epic than I’d expect from a tenth anniversary movie opener, but it’s pretty good.

And, get this, they actually decided to use most of the animation for the opener in the dub opening. While they didn’t maintain the cracking animation for the initial title, opting instead to use a flash and jumping transition, the pink and blue time/space stream is kept intact. The final title card is obviously changed too, though.

Oddly, I prefer the title card that the dub created over what the original movie had because not only is the title itself better (The ‘Dialga vs. Palkia’ part makes this seem like a wrestling match) but that was a kick-ass font, color and animation they had for that title card. This one’s alright, but it seems cheesy, especially that gigantic VS.

Also, I’d like to support Dogasu’s claim that there’s a black screen after the title card instead of showing Pikachu’s shadow as it’s also on my copy. I checked some clips of it online just to make sure and it’s still in those versions too. I assume that was an error caused by the edited opening sequence and they just never bothered to fix it.

Brock’s ‘Little Blue Book of Babes’ is originally his ‘Lover Ranking Book’ That’s creepier, but less demeaning than the dub’s.

The ‘ten times ten’ thing is, strangely, in the original…..It’s not a good line, guys. I don’t know if you guys think it’s a joke or a clever nod to the tenth anniversary or whatever, but it’s not a good line. Satoshi is not the type of person to hear a number and instantly start wondering about mathematical equations to achieve said number.

One of the things that is always changed between versions is the theme song. In this version, we get Together 2007. It’s a fine song but it’s terribly generic in terms of nearly everything. Not to mention that, while the song is really Pokemon-ified, it fluctuates back and forth between making sense and being gibberish.

The leaf whistle sounds the same in the original. I was hoping it’d sound better….Seriously, why would you have a part of the movie be a song so beautiful and calming that it can instantly quell fighting between Pokemon, yet have it sound like a song you’d hear coming out of a Otamatone? Hey, what do you want to see more than anything over a beautiful shot of fireworks over the Space-Time Towers at night?…..Bunyatto/Purugly’s butt!? You got it!

I gotta say, while I wasn’t a fan of Darkrai’s dub voice….his Japanese voice isn’t much better.

Oh dear. I have to apologize to TPCI now because they were just mirroring the same lame cover name system the original had. Musashi calls herself Musashina, Kojiro calls himself Jikoro and Nyasu calls himself Nyasugo…. 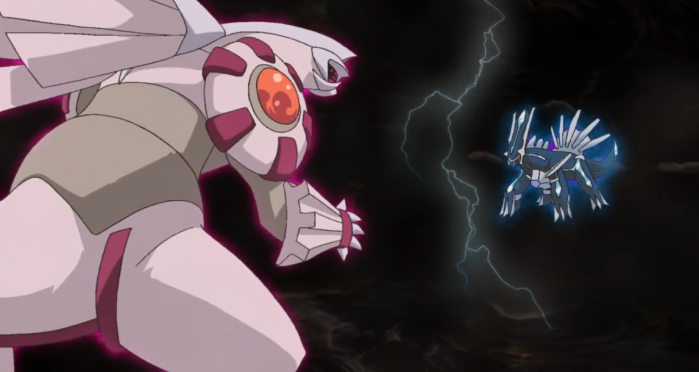 This might just be the subs, but the scene with the illusion Beadaru/Bibarel makes more sense now. Musashi says ‘A super rare Pokemon!?’ Kojiro says ‘I’m not sure about that!’ and Baron says ‘It’s an illusion!’ Goes to show how much even minor line changes can make an entire exchange seem goofy.

Nice to know that in addition to Mojumbo/Tangrowth being the worst Pokemon ever that its Japanese voice is equally horrible.

While we’re on the subject, Lucky/Chansey’s Japanese voice is also doofy.

No notes until the credits where the only change is the predictable replacement of the credits music. The original has a fully English song called Going Where the Lost Ones Go. I believe this is the first time that they’ve replaced a fully English song, but, as the comparison states, I imagine it was for licensing rights issues or something.

Shockingly, I prefer the dub’s I Will Remember You to this song. This song just sounds like a million other duets. It’s very bland.

This movie fared very well, and most of my notes are superfluous. The dub only really hiccuped in some lines that made some things either confusing or make no sense, but they weren’t really important things. And that’s kinda made up for with the songs since the lyrical songs in the original movie are incredibly weak in my opinion. Great score, bad lyrical songs. Only mar in that area for the dub is the intrusive rap song they had for no reason.