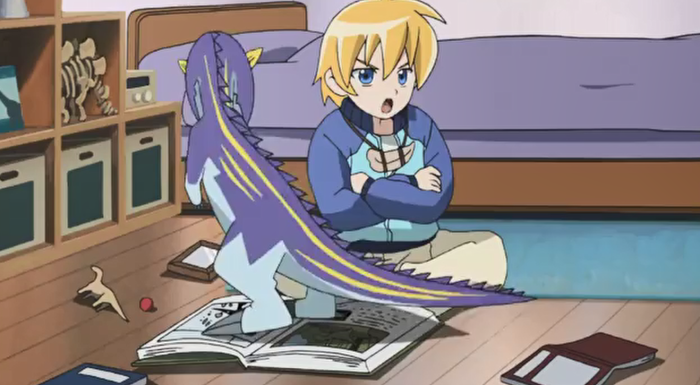 Plot: A saichania card is awoken in a museum in London, and the Alpha Team and the D-Team scramble to claim it. Meanwhile, Rex becomes very frustrated with Ace, who keeps causing trouble.

Breakdown: I wonder if a piece of Veronica Taylor’s soul broke off into the abyss when she found out she was pegged for another show that makes her prattle off painful pun titles in voiceover. Hm.

This series continues to infuriate me, but it’s one of those things where I’m more pissed about the accumulating smaller details than the overall big picture.

For example, again, we are destroying valuable artifacts for no reason. First, the guards at the museum have no qualms with smashing dinosaur bones and displays just to apprehend some yahoos with shopping boxes wandering around, especially when the museum seems to technically still be open since Dr. Taylor is meeting with the curator.

Second, there are so many stupid moments. For example, Chomp finds a triceratops display and nuzzles it, which is actually insanely sad. Max points out that he probably misses his family, but without even a second of pause he goes on to say that they’re his family now and they’ll have lots of adventures together.

What’s even stupider is they’re looking for the saichania, Max and Chomp find it, but Max doesn’t realize it’s real even though it’s clearly moving, breathing and blinking. He doesn’t even give it a second look or touch it before turning his back and being silent for just long enough for the saichania to walk away, like a goddamned ninja, and then Max suddenly decides to also leave without looking back.

Dr. Taylor has a moment of stupid too. He asks what would lure out a saichania, and he thinks about the fact that they live near water, which is something….most animals do since all living beings need water. If you don’t live near a fresh water source…..you…die.

Zoe briefly raises her voice at Paras when she starts eating a plant, and immediately after she sees Paras’ sad face she says now she knows how Ace feels. Why do you know how Ace feels? Wouldn’t this be more how Rex feels? You don’t know what that plant is. You could’ve been saving your dino’s life. Hardly akin to yelling at her for ruining a valuable book.

Later, she explains what she learned from that millisecond of ‘experience’ with the dinos, which is really as obvious as the nose on your face. They’re trying to be helpful, don’t yell at them – if you do, it hurts their feelings. Oh wow, you mean yelling at a living being and treating them like crap will make them feel bad? Golly, what a revelation. Sure am glad I’m two years old so this lesson is not painfully basic.

And how did she learn that from yelling at Paras for eating a plant? How was that helping?

Also, that doesn’t address the issue that Ace is being really hyper and destructive, and Rex can’t figure out why or what to do about it. In fact, that’s never really addressed at all.

Thirdly, the saichania’s walk cycle is animated like it has a full diaper. I have no clue how a real saichania moves, but I am almost certain it doesn’t barely move its legs while shuffling around. That doesn’t really have much to do with anything, but the CGI just really bothers me still.

Fourth, the way the saichania is lured out is with a bunch of vegetables. Wanna know why? Remember how I said earlier that Dr. Taylor said saichanias like to live near water? Well, he jumped from that to hippos, because hippos also live near water. So he gathered up hippo food.

Now, saichanias were herbivores, but that’s not the point. He’s a goddamn paleontologist. He should be able to deduce luring out an herbivore with plants immediately instead of going “Saichania’s lived near water…what else lives near water?….err….HIPPOS!…So saichanias must be exactly like hippos. Hippos eat plants! So I should lure out the saichania with plants!” It’s a good thing no carnivores or insectivores live near water.

Fifth, Zoe gets her first solo battle today, and it consists of immediately calling for help.

But Paras gets into gear!

Then immediately calls for help too. Because that’s one of Paras’ special abilities. Not lying. It can heal. And it can call for help. You certainly do belong to a female protagonist in a shounen show.

Then Max and Chomp show up and defeat Spiny easily. Yay.

As for the main plot of the episode, it’s one of the most predictable and boring plots I’ve seen in many moons.

Rex is a bit peeved at Ace for being all rowdy and getting mud on his nice book, which he then licked “clean.” The plot is resolved by Ace saving Rex’s life because that’s always how understandings are made between two characters.

Alright, there’s a tiny bit more to that. Rex had to understand that Ace was trying to help when he licked the book, but Zoe already pointed that out, before the opening theme song, even, so I guess Rex is a crappy listener. Also, this wasn’t a time to shine for Ace because he loses against Terry.

As for the saichania, despite Dr. Taylor luring it out, the Alpha Team manages to snag it and they also get away with some important tablet. So, congrats, guys. You caused a bunch of damage to a museum and failed in both of your objectives. But hey, at least that minor tiff between Rex and Ace is over. Thank god. You can slow down now, pulse.

Overall, this episode is not good. I guess it’s not as infuriating as the previous episode, at least they didn’t flippantly destroy as many historical artifacts, but it’s, ultimately, very boring. That conflict was really lame, and the resolution might as well have come from the mouth of Dora the Explorer it was so preschool level.

Also, I can’t prove this, but given the animation, I really think Ace pooped on Rex’s book originally. If he had muddy feet, he would have been getting mud all over the room and on Rex’s bed as he was running around. Instead he popped a squat and suddenly left footprints. 4Kids would obviously change this, and I feel like that’s for the better. Afterall, if I’m right, then that means this entire plot is literally built….on crap.