Skip to content
HomePosts tagged 'pidgeotto was too good for ash' 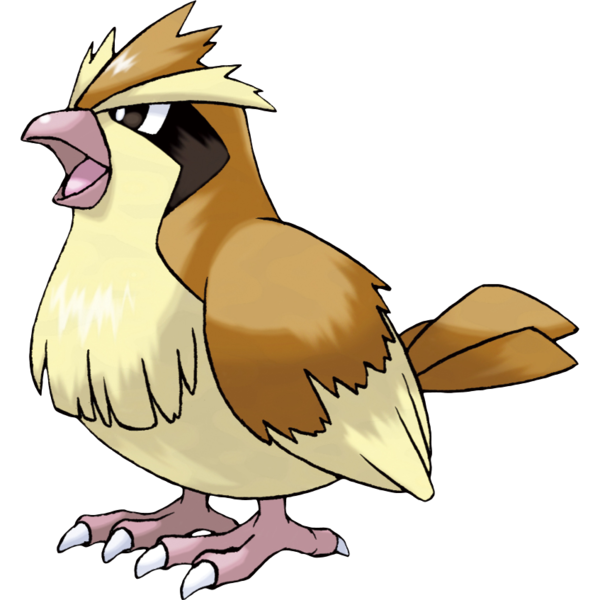 Name: Pidgey is a combination of ‘pigeon’ and either ‘budgie’ or ‘chickadee’ It could also be in reference to the word ‘pudgy’ given the roundish design. I like Pidgey. It’s very simple and plain, but also kinda cute, memorable and rolls off the tongue quite nicely.

Its Japanese name is Poppo, which is supposedly in reference to the onomatopoeia for the sound a pigeon makes ‘poppoppo’ Poppo’s kinda goofy and less fitting, at least to my American eyes, but it’s also pretty cute and snappy.

Fun fact: In the beta versions of Pokemon Red and Blue, Pidgey was originally named ‘Pidge’

In Korean, it’s name is Gugu, while in Chinese its name is Bobo, both of which are incredibly goofily cute.

Design: ….Let’s be real – Pidgey’s design is really boring. It kinda goes hand in hand with basing a Pokemon on one of the most common and boring birds (in terms of aesthetics) in the world.

It’s a very simple brown and tan bird. That’s not to say I dislike it, but there’s not really much to like, nothing that makes it really unique.

The same can easily be said of its sprites – particularly Red and Blue’s which doesn’t display the more prominent facial features or body structure of the Pidgeys we know today and really just looks like someone made pixel art of a bird they saw on a power line outside their window.

None of them really stand out much, except DPP’s, which makes it look like it’s ice-skating for some reason.

BW (&2) ’s is also kinda cute because it does a little dance.

Shiny: Pidgey’s shiny is frickin’ awful. I don’t know who chose this gross baby-poop green color for it, but it is vile. The earlier versions don’t look too terrible because they appeared more yellow than they did green, and the more recent versions are more toned down, but middle gen versions just look disgusting.

Cry/Voice: Pidgey’s game cry is perfectly fine as it sounds like a cute little bird tweet. Likewise, the anime’s voice sounds pretty cute and like a typical sound a pigeon would make.

Dex Entries and Backstory: Just as its design is kinda plain and boring, its Dex entries are similarly nothing to write home about. It’s very common, docile and kicks up dust with its wings to deter enemies.

The only standout thing about the Dex entries are the mentions of its innate ability to find its way back home no matter where it is, like a homing pigeon. But like I noted when watching the episode about homing Pidgeys in the Johto league episodes, this is actually somehow made boring because in the games it just has a good sense of direction and in the anime they’re trained to go from point to point by just having them run the route over and over.

In reality, how homing pigeons find their way is a bit of a mystery, but there are several theories.

First, pigeons can use the position of the sun to gauge their direction. They may also use landmarks like people do to take note of where they’ve been and how to get back. This matches the Pidgey Dex entries more closely.

Second, they may use magnetoreception, which is the process of using the earth’s own magnetic fields to estimate your location and the location of the target. Scientists believe that this may be why pigeons have iron deposits in their beaks.

Finally, a new theory suggests that pigeons can use infrasound to navigate. Detecting frequencies too low for human’s to hear, they can determine where they are and constantly search for the sounds of their home.

Design-Wise, Pidgey has many birds that it supposedly gains its features from such as a Cedar Waxwing, a house sparrow, a chickadee and osprey. Out of all of these, I think it resembles a house sparrow the most, though the cedar waxwing does sport that trademark spiky crown. 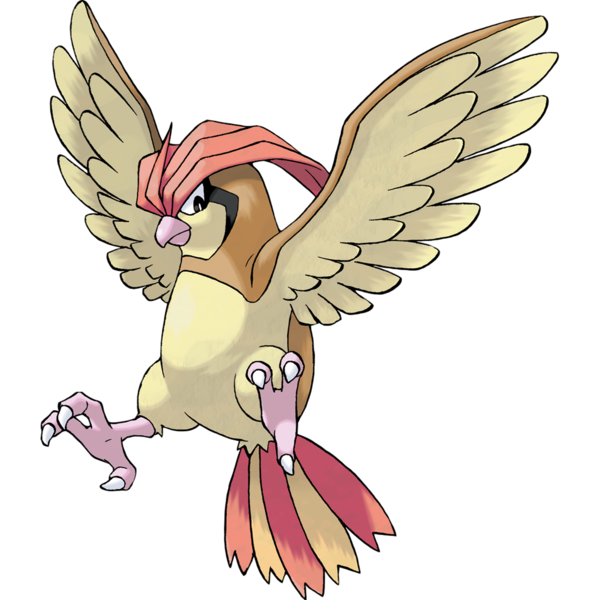 Name: I really like Pidgeotto’s name. It’s very snappy, works well with its predecessor and fits the Pokemon well.

The name comes from either a combination of ‘pigeon’ and ‘diciotto’ which is Italian for 18, the level number in which it evolves, or it’s a combination of ‘pigeon’ and Otto Lilienthal, a German aviation pioneer. Truth be told, neither version seems likely to me because the former just seems convoluted and the latter seems odd because it’s the first name not the last name like most references are. If I had to pick, the latter is probably more likely, but still.

Way to be creative, Japan.

Fun Facts: Originally, it was going to be named Pidgeot. Personally, I think it might’ve worked better reversed. Kinda a name-length progression kind of thing.

Design: While Pidgeotto also has a bit of a plain design, I think they did just enough to it to make it stand out and look pretty cool. I’ve always really liked the dark pink crest it has and the yellow and red tail feathers. Plus, Pidgeotto is at nice size where you can have it perch on your arm like a hawk or sit on your shoulder like an owl.

Sprite-wise, it’s mostly unimpressive. I will note that in RBG, RB in particular, they really tried to have Pidgeotto look more like Pidgey in regards to its pudginess and head shape.

Shiny: Because Pidgeotto retains the same shiny color scheme as Pidgey, it has basically the same level of ick-ness. The only aspect that makes it slightly more bearable is the reddish-gold crest it gains and the fact that many of the sprites focus more on browns than greens.

Its game cry is interesting because it still retains a very distinct bird-like sound while also have a bit of a growl to it, making it sound more aggressive than the mild-mannered Pidgey.

Dex Entries/Backstory: Pidgeotto’s entries are a little more interesting than Pidgey’s. It is now a fierce, territorial fighter with extremely sharp claws. It also has incredibly good eyesight for targeting prey like Exeggcute and Magikarp from far distances.

Design-wise, it seems to be based on an osprey, which I can definitely see more in Pidgeotto than Pidgey. 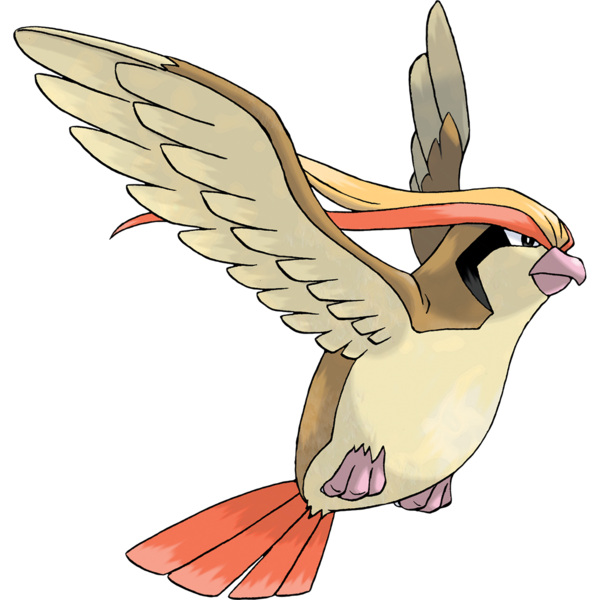 Name: I really like Pidgeot’s name, which is the same in Japanese as it is in English. It’s incredibly snappy and befitting of this majestic bird.

It’s a combination of ‘pigeon’ and ‘jet’ which I kinda get but also don’t because you’d think a combination of those words would get you a ‘Pidg-jet’ sound, but it’s ‘Pidg-ee-aht.’ Pidgeot seems similarly confused because, when it says its name, it typically says ‘Pidg-aht’

Fun Fact: In French, it’s called ‘Roucarnage’ which is too awesome for words, and in German it’s ‘Tauboss’ which literally translates to ‘Pigeon boss’

Design: I absolutely adore Pidgeot’s design. It maintains a good chunk of the simplicity of its pre-evos while achieving a majestic and beautiful style all its own. The long dual-colored crest, the noble yet intimidating face, the massive increase in size to make it have a powerful presence and allow its trainer to ride on it – it’s amazing.

Sprite-wise, Gen I’s okay, but RB still seems to want to channel Pidgey-ness with its pose and shape.

What the unholy hell is going on with Gold’s crest?

Gen III is pretty unimpressive, but what is Emerald’s sprite doing? It’s cool, I guess, but why is it doing a spin?

DPP is just weird because, while the initial pose is just fine, the animation is just stretching out its head and opening its mouth real quick. I get that it’s calling, but it looks so strange.

HGSS is better with a more dynamic pose and a more threatening animation.

Shiny: Pidgeot’s shiny started off very rocky. It retained the gross green color for the body while having washed out colors for the crest. It made it look very unappealing.

However, every Gen beyond the first has made Pidgeot’s shiny gold, and that is SO much better. It is a beautiful shiny that is very fitting for such a majestic and noble-looking Pokemon. I’d gladly sit through raising a blech shiny Pidgey and a meh shiny Pidgeotto to get that golden bird. 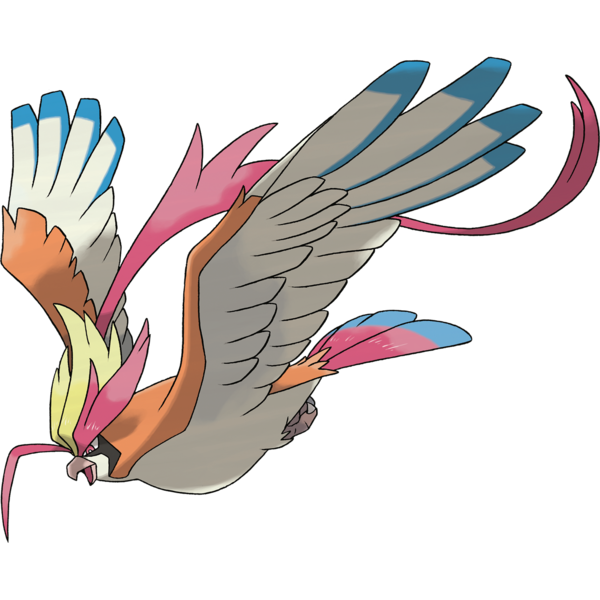 My opinion on Mega Pidgeot bounces back and forth a bit – never to a negative point, but sometimes I really love it and other times I just find it to be good.

On one hand, this Pokemon is gorgeous. It rivals the aesthetics of legendaries, it’s that good – it would fit right in with the other legendary birds. It almost looks like Pidgeot got fused with Articuno, to an extent.

However, part of me thinks it looks a bit busy, and I can’t help but hate those eyes. Pidgeot had such a noble but intimidating look, but Mega Pidgeot has eyes that make it look practically evil.

Also, Shiny Mega Pidgeot has little bits of dark purple on it. That’s another aspect I’m very unsure of….I’ll say I like it. 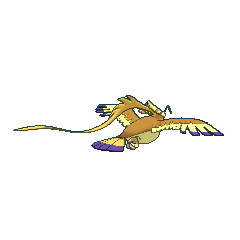 The game cry is good, retaining some growl-y sound while also having a higher pitched chirp to it.

Dex Entries/Backstory: The most impressive of the bunch, Pidgeot can fly at speeds of up to Mach 2 and reach altitudes upwards of a mile. It has such great vision and precision that it can see Magikarp in the water while flying, swoop down and easily nab them up, though I’m not sure why they’d do that because, as we know, Magikarp are all skin and bones. Thanks, anime.

It has such a powerful chest with an amazing wingspan that it can create windstorms so powerful that they can bend trees. They also use their large wings to scare off predators.

Another common theme in the Dex entries is mentioning that Pidgeot are so beautiful in their plumage that they’re a very common choice for trainers.

The entry for its Mega evo includes that it gains such strong muscles upon this additional evo that it can fly for two weeks straight without stopping…..which…is impossible, no? Isn’t Mega Evolution only supposed to last a very brief amount of time? I’m not sure the time limit in the anime, but in the games Mega evos can only be achieved in battle and only last as long as the battle does, right?

In terms of design, Pidgeot is based on either a osprey or an eagle with its shiny being seemingly based off of a literal golden eagle.

Interestingly, the design of its eyes may be based off of the eye designs of depictions of the sun/sky gods Ra and Horus.

Next up, the Rattata line!