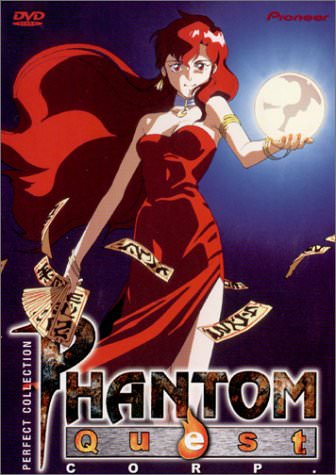 Plot: Phantom Quest Corp is a small company, one of a kind, that deals with combating paranormal activity. Anything ranging from vampires to ghosts to demons, they do it all. Ayaka Kisaragi is the irresponsible yet powerful owner and operator of the business along with a boy named Mamoru, Nanami, a pyrokinetic yet can’t control her powers, Rokon, an exorcist, Suimei, a fortune teller, and sometimes she gets a bit of help from the local detective, Karino.

Breakdown: This is a fun series of four short stories involving confrontations with various paranormal entities. The stories and characters are usually quite funny, exciting and entertaining, but its main negative point is in its lack of any real depth with the main characters.

Ayaka is lazy, loud and somewhat out of control. She’s also a bit of a drunk, but she means well and is very serious when she needs to be. She seems to have some supernatural abilities like magic earrings that do various things, and, most prominently, a big tube of lipstick that turns into a red lightsaber.

We never learn where she got these powers, though, nor why she started this company to begin with. It should also be noted that she likes to make speeches when she comes into contact with her foes like Sailor Moon.

Mamoru is the biggest mystery to me. He’s a small boy with apparently no supernatural abilities whatsoever. His role in the business seems to be finances, ensuring Ayaka wakes up on time and does her job, taking and scheduling jobs and doing research. He’s a very nice, responsible boy far beyond the maturity of Ayaka, but why and how is he here?

Ayaka can’t be his mom because he’s always calling her ‘Miss Ayaka’, he seems to live at Phantom Quest Corp’s headquarters with Ayaka – where they hell did he come from? Why did he get recruited for this? What is he to Ayaka? None of this is ever explained.

The rest of the characters get even less explanation. Their descriptions in the plot synopsis is basically all we get for information on them. Karino is Ayaka’s psuedo-love interest, but that’s all that needs adding.

That really is Phantom Quest Corp‘s main issue, but it’s not really enough to keep me from enjoying it.

This is a four episode long OVA with no additional anime series. A one-shot manga came out about it, but apparently it was just a story about them heading to New York to set up more business, which means that, even if you’re very thorough in your following of this series, you won’t learn anything else about the main characters. Each episode showcases one case. None of the cases are particularly fantastic. Episode two is the closest they get, but they’re still entertaining to watch.

Art and Animation: The art is pretty good and the animation is good to great. Madhouse always does nice work.

Music: I loved the music, especially the really addictive ending theme. It’s a fairly nice changeup from most anime themes.

Voice Acting: English – There’s some pretty decent voice talent in here including but not limited to Wendee Lee (Credited as Wendee Day) and Brianne Sidall (Credited as…. Jetta E. Bumpy….Okay, you and Wendee really need to find a gentle middle ground between too obvious and too hilarious for your pseudonyms) And Steve Blum even plays a character in episode three…..a slimy pervert character, but who cares? It’s Steve Blum, enjoy him.

Bottom Line: It’s by no means remarkable, but at a short four episodes and some entertaining stories and funny scenes, it’s hard not to recommend it.

It was produced by Madhouse and Pioneer LDC. It is currently licensed in the US under Geneon.

Recommended Audience: Ayaka’s sometimes nude-ish, but nothing’s ever shown. There’s some mature humor, but it’s basically innuendos. One start of a sex scene, but it happens off-screen. Some violence and blood, but nothing too graphic, and a little swearing. 8+