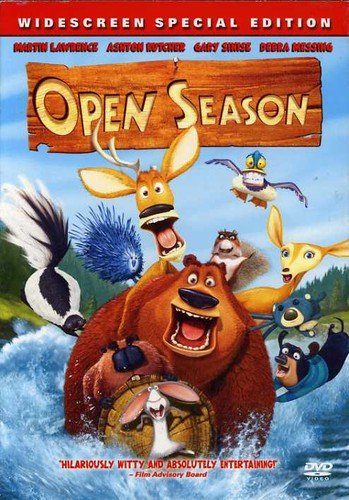 Plot: Boog has been a domesticated bear for his entire life – ever since he was rescued by the forest ranger, Beth, as a cub. After meeting the deer, Elliot, who caused a lot of chaos and problems in Boog’s life, Beth realized that she finally had to bring Boog out into the wild and let him be free. Completely lost in the woods right before the start of Open Season, Boog and Elliot try to find their way back to town and Beth before the hunters or other animals get to them first.

Breakdown: Many years ago, I reviewed Open Season for my old blog on that old forum I’ve mentioned before. My review was….bad, like many of my old reviews. Most notably, it was a bit overly negative, again, like many of my old reviews. So, for the review series tackling all of Sony Pictures Animation’s movies, Sony Pictures Analyzamation – yes, that is a mouthful – I decided to rewatch and rewrite the review from scratch.

And I’m glad I did, because it allowed me to finally review this movie with a more level head.

One of my biggest issues with the film on the first watch was Shaw and how ridiculous he was as a villain. Shaw is, indeed, a ridiculously awful villain. Technically he’s a fine villain because he’s VERY easily hateable. But he’s such a ridiculously over the top caricature of hunters that it’s almost too easy to hate him.

I’ll admit something, my dad is a hunter and I’ve been brought up my whole life to learn about responsible hunting practices and gun safety. While I can’t bring myself to kill an animal, I do respect responsible hunters (not trophy hunting. That can die.). I also completely understand and respect people who are against hunting. It’s one of those issues where I’m probably a hypocrite, but the point is a hunter being a villain in a movie where a deer and a bear are the protagonists is completely understandable. It’s also understandable for them to be made unlikable, but Shaw is one of the biggest most over-the-top ridiculous parodies I’ve ever seen. I say this after pausing to write these notes at a moment where Shaw had just got done whipping his rifle out in a crowd of people to try and shoot a deer and bear in the head at once with one bullet, and then, once he’s heading off in his car to chase them once they’re returned to the woods, he says this.

“A bear and a deer working together. How far does this conspiracy go? How many other animals are involved? God bless America! I hope the bald eagle hasn’t turned!”

No, I’m not kidding. He even tucks his gun into bed at night…. Shaw is an evil person, but he’s also a complete dumbass, spending a good chunk of the movie thinking the animals are taking over the world and enslaving humans….

Shaw’s not the only ridiculously overdone hunter either. Later in the movie, a giant group of hunters all go out at the start of open season being loud and rowdy on the way up there with one of them yakking about how they’re going to blow the animals’ heads off. All of these people seem to be one big hunting group, which isn’t typically allowed for a multitude of reasons.

Not to mention the fact that the only cop in the area, the sheriff, is entirely useless. He sees Shaw have a clearly illegally killed deer on the hood of his truck, splayed out, which is also against the law, and is just like ‘eh’. He sees Shaw try to shoot his gun into a crowd of people, Shaw leaves when he’s not looking and he’s just like ‘eh’ and never tries to pursue him.

But enough of that malarky. How is everything else? Well, considering how I slammed it in my first review, upon rewatching, it’s pretty okay. It’s not gonna win any awards with me, but I had a fine time watching it. Smiled a few times, kinda chuckled a bit, got a bit moved by the emotional moments and had some fun. It’s a very okay movie and decent enough first outing for Sony.

I do agree with some of the critics who said that it’s hard to get a lock on who the target audience is, however. Like, the humor is overall pretty juvenile, including an amount of toilet/poop humor, but some of the humor is somewhat adult and some of the imagery is actually pretty messed up for a kids movie.

For example, there’s a joke where Shaw warns a couple to watch out or their weiner dog will shank them, and the lady said ‘Oh no, we don’t have to worry about that. We got him fixed.’ I want to believe with all my heart and soul that I didn’t just hear a dog humping/bestiality joke in this movie. I want to believe so badly.

There’s a scene where Boog and Elliot are behind a curtain at a show Boog is doing. They get into a fight, and their shadows are meant to convey an extremely bloody and gory murder of Elliot. Boog ‘skins’ him, ‘disembowels’ him and splatters his ‘blood’ all over the curtain. And what’s even weirder is that Beth is also watching this from in front of the curtain and she won’t go behind the curtain to stop Boog from slaughtering this innocent deer. She just keeps yelling for Boog to stop while in front of the curtain.

Shaw’s cabin legitimately freaked me out. Many times when (kids) cartoons will show taxidermy, even if it’s in a scary manner, they won’t choose to design the taxidermy in the same general style as the other animals. Because showing the cutesy big-eyed goofy cartoons as a dead-eyed lifeless decorations is kinda scary to many kids. If they do maintain the style, they typically don’t try to make the scene scary. It will just be dark humor. However, in the scene in Shaw’s cabin, his walls are covered in heads that are all the exact same goofy cartoony style as the other alive animals we were watching earlier. And this scene, while having brief few frames of humor, was definitely meant to be shocking and scary. It was meant to show how ruthless and bloodthirsty Shaw really is. He’s not just a dopey hunter. He’s a violent, dangerous killer.

Then there’s all the obvious gun play and talk of violent acts on animals, it’s all very iffy.

While they didn’t spend a whole lot of time together, I think they did a good job at making Beth and Boog’s relationship feel very genuine. I felt like they were truly attached to each other and watching her have to say goodbye to him was pretty emotional.

I will, however, call her (and the sheriff) out for sending Boog off into the woods like that, though. Boog had spent his entire life in captivity, and he has to be several years old. He had his own ‘apartment’, he had a teddy bear, tons of treats, his own TV – for god’s sake, this bear is literally toilet trained. And yet they think it’s okay to send him off to live in the woods with no preparation whatsoever.

While many of the animal characters were just annoying as sin (except the porcupine, who was adorable, and Giselle, who is just a VERY typical and bland love interest) including Elliot, I don’t think they did a bad job redeeming them in the end. They ended up being pretty entertaining in their own rights. I just think it was all fairly rushed. Too many of them were flatout jerks for me to be all that glad for their happy endings. And is it really all that happy? Did the animals end hunting in that area forever?…..I mean….they did literally bomb the hunters out, so maybe they did.

The animation was okay. Bouncy and cartoony, and stands up alright after 15 years. I think the art style is very ugly, however. Nearly every animal and human is just butt-ugly. They have incredibly odd proportions, and few of them look appealing. I thought the beavers and porcupine were cute, but that’s about all. I will give them a good amount of credit for Boog’s fur, though. While it definitely doesn’t look like what you’d see on a realistic grizzly bear, it does look fluffy and soft, kinda like what you’d get on a toy bear. I would say maybe that’s on purpose because he’s a domestic bear, but I don’t think they’d think that far ahead.

The music was alright. Some of the songs were very fitting for the scenes, but the soundtrack is overall fairly forgettable.

In the end, Open Season is okay. I don’t think I’ll ever watch it a third time, but if you’re up for a predictable but reasonably entertaining movie, then have at it.

I am not, however, looking forward to the THREE DIRECT-TO-VIDEO SEQUELS at all. Hopefully they’ll be alright, but I am reading up on them and I’m not gonna hold my breath.