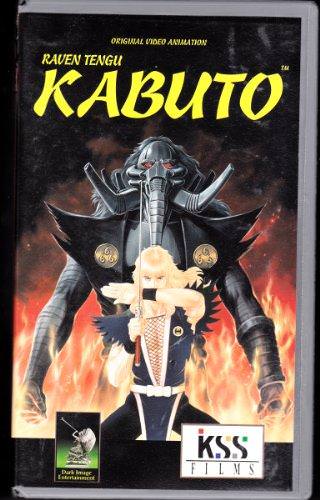 Plot: Kabuto is the last of the Tengu, a clan that sealed away the dreaded Kuroyasha many years ago. Kuroyasha Douki has recently returned and wants revenge on the descendant of the Tengu clan for sealing him and his comrades away. Kabuto is a mighty warrior, but he still requires help to take down the Kuroyasha. He unlocks an ancient demon sword named Hiryuu and calls upon the four guardian gods of his family to help take them down.

There’s not a whole lot to say here. It’s one of a million ninja clan vs. evil demonic ninja clan shows that peppered the 80’s the 90’s in anime. But this one gives the main character black crow wings. Oooooooohhhhhhh~~~~

As a first episode, it does a good enough job at explaining the backstory, hero, villains and what the objective of the story is. The hero’s just as you’d think, the villain’s just as you’d think, and the intro battles are putty patroler-esque pushovers. The finale gives them these cool flying statues that blow fire, so there’s that.

The art is very dated, and the animation is nearly hilarious with that classic, always mocked, sudden zoom in to a shocked face trope, as well as the regular action animation shortcuts of cutting away during an attack to just animate a lit up slash on a black screen.

That’s not to say the action’s not fun. It’s not some of the best I’ve seen, but it’s pretty good so far.

The music is mostly forgettable, and, remarkably, that’s probably the only aspect of this that isn’t really dated.

Anyone who wants a dose of 80’s ninja cheese can enjoy this just fine, but so far there’s really nothing to draw anyone else in. I’ll keep it on the back burner.

Plot: Two ninjas, Marou and Hikage, are best friends. However, one day, in the wake of war, Marou suddenly turns on him and his ninja clan, injuring Hikage with a shuriken in the process. Hikage sets out to find him, but soon finds out that he is the leader of newly respawning Yoma who have been awakened and empowered by the blood, death and hatred of war. They call him Kikuga no Miko, and he plans to destroy the world with his army of yoma. Hikage is the only one with a chance to save him or kill him.

Breakdown: This is a pretty ‘meh’ feature for the bulk of the first half. Two ninja are best friends from childhood. Aat least I assume as much. Quite literally the only evidence towards this is constant clips of them running through a field of flowers as children. One of them betrays the other and their ninja clan with only the other best friend able to stop him. Really a cliché plot point, even in the 80’s, but the show does a pretty good job of keeping you interested and entertained throughout it all.

Hikage’s a bit of a bore. Another common trope of ninja shows are main characters who are stoic and silent. While this can be fine and badass, Hikage gives off a more ‘not talking because I’m rude’ and ‘I’m very boring’ vibe. He’s not an awful main character as we can see that he does truly care about the people who get close to him, but for most of the OVA he’s pretty boring. His English dub voice actor doesn’t help at all. He sounds so bored most of the time.

Marou’s also a bit of a problem. Like I stated, we get no real insight into his and Hikage’s friendship outside of a constant scene of them running through a field of flowers as children. While they do a fairly good job at making us more emotionally connected to this character towards the very end, you feel no real emotion about his and Hikage’s situation for most of the show because we don’t know Marou outside of him being evil. The first scene in the series is him attacking Hikage and leaving the village.

Inuyasha did the same thing. Remember, the very first scene in Inuyasha is of him wreaking havoc in the village, stealing, possibly killing people, pretty sure he maimed Kaede and basically painting the picture that he was a bad guy and Kikyo was the hero. Despite starting off rocky, through character development and backstory, we learned why he did this and that he is actually a good guy at heart. This series either didn’t have the necessary amount of caring to bother showing such background or development. He’s evil but we’re supposed to care about him because Hikage basically tells us to.

As another means to get us emotionally connected to his character, we have a bit of a plot twist near the end of the movie. Her name is Kotone and she was Marou’s wife before she was slain by Marou. She wanders the earth as a spirit after her death and meets another character named Aya. We can emotionally connect with Kotone because her story is quite sad, but she does come right out of nowhere. She also serves as a bit of a weird plot device at the end of the series that I won’t spoil but it doesn’t make much sense to me.

Aya is actually two different characters over the course of the series. She’s a woman that Hikage meets in the first episode. She takes him to a village made up of travelers who live their lives getting drunk, partying and pretty much just ignoring the harshness of the world around them.

It’s later revealed that she, along with everyone else in the village, had horrible pasts that made them want to commit suicide. A yoma created a village where travelers like her who have lost the will to live get to live relatively peacefully until the yoma decides to eat some of them. I would suppose the other villagers don’t question this either because of the spell by the yoma or because they’re all travelers and thus don’t find it odd when someone suddenly disappears. Hikage develops a bit of a thing for her, but she’s not the character who meets Kotone.

Aya #2 is a konoichi from a ninja village that Hikage meets in his travels. She’s being chased by ninjas from her village claiming that she killed their master. She denies this, but we never find out the story behind this nor whether or not she actually did it. I’d say ‘no’ considering her demeanor and the fact that she doesn’t seem all that skillful as a ninja to kill a master of all people, but we never learn for sure.

Aya’s….okay. While she has an interesting weapon (razor sharp wires that she can shoot from her hands) she doesn’t get to do a lot with it. She accidentally blinds one of her comrades and manages to hit a demon horse, but her attack actually ends up backfiring on her.

She’s not….annoying, per se. She does fall in love with Hikage faster than a Disney princess, but I do give her props for being practically the only one with a voice actress who seems to actually give a crap. She does get slightly annoying when captured, though, and seems to suffer from the same speech impediment as Miaka, Kagome, Tamahome and Inuyasha. She constantly yells Hikage’s name and can’t seem to save herself for the, no pun intended, life of her. Damn shame too, since she’s the only female fighter in the entire OVA.

There is plenty to like about this OVA, though. The atmosphere is fairly creepy, and there are some moments that are legitimately frightening. The yoma, while having a very common theme of bugs such as spiders (okay, arachnids) and moths along with snakes as the enemies were pretty good in design and fairly intimidating. Oh and did I mention there’s a werewolf-centaur in this movie? That’s either incredibly awesome or Mad Libs yoma edition.

While you really only watch this for creepy scenes and fairly cool fights for a bulk of the OVA, the relationships are usually fairly sincere. I just wish we had gotten a bit more development for them to feel more emotionally connected.

Art: The art and animation are pretty dated. It was never distractedly bad, but it definitely showed its age. While many of the visuals were creepy and the character designs were okay, it still seemed quite rough and not quite fluid.

Also, it kinda bothers me that Hikage wasn’t injured more than he was. He wears an eyepatch for the bulk of part 1 and we see that he didn’t even lose his eye – he just got a small cut under his eye from Marou’s shuriken. Wouldn’t bother me as much if the scar were actually noticeable. For a good chunk of part 2 I kept forgetting that he had that scar.

Music: Ehhhhhh. While not being particularly bad either, the music is also dated. And when I say that, I don’t mean it’s old traditional Japanese music to fit the era, I mean it’s really energetic synthesizer music. Sometimes the music does get distracting, but, for the most part, the score is okay.

Bottomline: It’s a short, fairly decent watch for any fans of the genre. I see that people are actually quite mixed in their opinion of this show. Some say it’s awful, others say it’s okay and some say it’s awesome. I guess it’s not a taste for everyone, but you be the judge.

Additional Information and Notes: Blood Reign: Curse of the Yoma was produced by JC Staff and Toho.

It was directed by Takashi Anno, and it was based off of a manga written and illustrated by Kei Kusunoki.

It is/was under an English dub license by ADV Films.

Recommended Audience: LOTS of blood, gore, guts and dead bodies. A couple of scenes are pretty damn gross in their graphic nature, and there’s never a shortage of blood flying around in battle. In terms of sex, there is none, no nudity either (well, there’s a naked baby at the end if that’s really offensive to you) some swearing peppered throughout, Aya #2 has a swearing streak for a bit. 16+