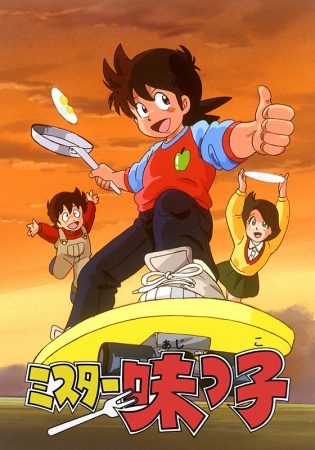 Plot: Youichi has a great passion for cooking, and is the beloved chef at his mother’s diner. The emperor of the culinary world, Aijou, visits his restaurant with his secretary, Tareme. Youichi had a previous bad run-in with Tareme and he scoffs at the idea that this child can create any food worthy of Aijou’s palette or any good food period.

Youichi, known as ‘Ajikko’ or ‘child who makes good food,’ accepts the challenge of making a delicious dish for Aijou, even without knowing who he really is. As a testament to his faith in his craft, he puts up the restaurant’s sign as a wager if he loses, subsequently also putting the restaurant’s honor at stake. He makes Aijou his newest dish, a super thick katsudon.

Though Aijou and Tareme both think that is impossible to make since either of the traditional cooking styles results in either undercooking or burning the meat, Youichi manages to make a delicious and properly cooked super thick katsudon, much to the delight of Aijou who leaves him with his business card and invites him to the Aijou building, a place filled with culinary knowledge and techniques, and where only the best chefs are invited.

Breakdown: Ah, yet another ‘Child prodigy’ story. And really that’s pretty much all this is so far. Apparently this series was so influential that it inspired the creation of Iron Chef and helped spawn the whole competitive cooking craze, but this episode is pretty cut and dry ‘kid is insanely awesome at (enter topic here)’

Youichi is very much typical at this point. He has a great love of cooking, and obtained his skills by imitating his father, a great chef who passed away at some point. He also seems to have plenty of imagination in his cooking and has great pride in anything he makes.

Interestingly, despite being honored by Aijou’s invitation, he doesn’t seem to be compelled to leave his family’s diner and try to be ‘the best (enter profession here)’ like many other child prodigy stories. He’s perfectly fine cooking what he likes to cook at his mother’s restaurant.

This episode does a pretty good job at laying the ground work for our characters and setting up the bare bones of the plot. Even moderate side characters like Mitsuko, seeming romantic interest, and Shigeru, Mitsuko’s annoying little brother are given a satisfying degree of attention and exploration early on.