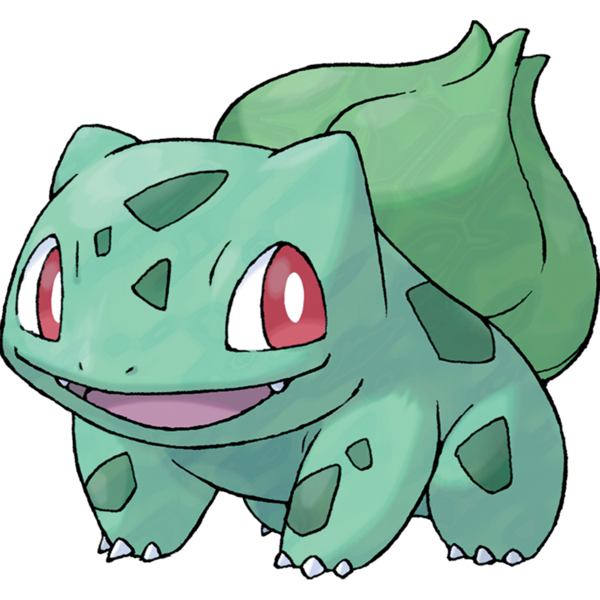 Name: According to Bulbapedia, Bulbasaur’s name is pretty self-explanatory. The ‘bulb’ part is indicative of plant bulbs, and the ‘saur’ part is Latin for ‘lizard.’ I’ve always loved the name Bulbasaur. It rolls off the tongue nicely, is very fun to say and suits it very well.

In the original Japanese, its name is Fushigidane, which can either be translated as ‘Isn’t it strange?’ or ‘Mysterious bulb’, the latter of which is what I believe the writers were going for. I’ve always liked Fushigidane too, even if it is more of a mouthful than Bulbasaur.

Fun fact: In the French version, its name is Bulbizarre, which I thought was really cool.

Design: Bulbasaur’s design is very simple, but incredibly cute. I love its large and expressive eyes and the overall shape of its body. It looks perfect for a pet. I also really like its color scheme. Oddly, I believe the spots were just the right add-on for Bulbasaur because I think it would look really weird and too simplistic without them.

Going over the sprites real quick, the one for Red and Blue is cute.

It’s in a dynamic pose, and I like that. The back view makes it look derpy, though.

Green’s version makes him look derpy from the front.

Pretty normal and nice until we get to Crystal, which is also fine, but I could do without that animation. That makes me uncomfortable for some reason.

All of the other sprites look fine except for the backs of the Black and White versions. They’re fine, but the animation makes it look like it’s humping something….

The shiny version kinda ruins the color scheme, if you ask me. Yeah, it’s a Grass type, so green should suit it just fine, but it’s a little…too green.

Cry/Voice: Bulbasaur’s cry is cute, but sounds too much like an old Atari crash sound near the end. Bulbasaur’s anime voice has always been a favorite of mine. Whenever I feel like imitating a Pokemon, my first choice is usually Bulbasaur.

Dex Entries and Backstory: Bulbasaur’s story is pretty straightforward in all of its Dex entries. It’s a creature that had a seed planted in its back from birth. The seed slowly sprouts and grows with the Bulbasaur over time. Bulbasaur absorbs and stores nutrients from photosynthesis in the bulb, and can go days without a proper food source thanks to this storage system. The bulb itself is full of seeds.

Anime-exclusive, the bulb will glow blue when it’s close to evolving, which I believe is a fine add-on.

Another thing they only mention in the anime is that researchers aren’t sure whether to classify Bulbasaur as a plant or animal, but that’s always seemed silly to me. The entries clearly state it’s an animal that had a seed planted in its back upon birth. In fact, no matter the physiology of the Pokemon, don’t all Pokemon have to be technically classified as animals or animal-like since they’re living, breathing creatures? 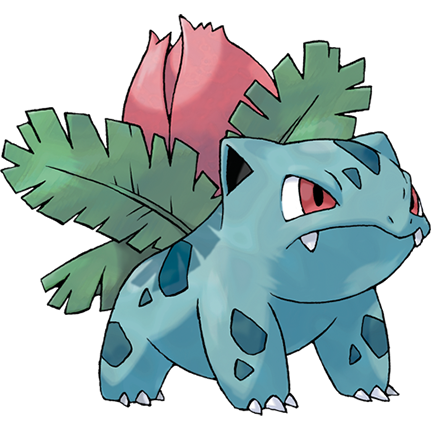 Name: Ivysaur’s name is on par with Bulbasaur’s, even if it has slightly less bounce to it. Like before, the ‘saur’ part is Latin for lizard while the ‘ivy’ part is alluding to the plant, ivy.

In Japanese, its name is Fushigisou, which is also not quite was bouncy as Fushigidane, but still nice. It translates to ‘It seems strange’ or ‘strange grass,’ again, the latter of which is what I believe they were going for.

Fun Fact: In French, Ivysaur’s name is Herbizarre, poking at herbs. I think Herbizarre sounds cooler than Bulbizarre and Fushigisou.

The Mandarin version of Ivysaur’s name is Mìaowācăo, which means ‘wonderful frog grass’ Somehow, not as funny as ‘Wonderful frog seed.’

Design: I adore Ivysaur’s design. They add enough to it to make it very distinct among its line without seeming like it’s purely a middleman. The flower bud is pretty, the leaves make it look much grassier, the sharpness to its face is just enough to keep it adorable while also giving it a clear tough look. The slight change to its color scheme is nice. I like the darker blue-ish green hue and the black pupils they added, plus it’s cute little ears.

Sprite-wise, what the hell is up with Red and Blue?

And all of the early back sprites look very odd, like they pushed the flower up way too high.

Silver makes him look like a super villain, which is awesome.

And Crystal makes it seem like he just ate a part of my face, which is…awesome?

Every other sprite looks pretty okay, except what is up with Black and White? Why does it look like its waving its leaves at me?

I like Shiny Ivysaur much better than Shiny Bulbasaur. It’s not my favorite shiny by a long shot, but the yellow flower looks nice, and that melded with the lighter green skin gives off a calm spring meadow vibe.

Cry/Voice: Ivysaur’s cry is rid of the Atari crash sound from Bulbasaur’s cry, which is nice. It also sounds a little higher pitched while ending on a deeper note, which makes it sound pretty cool, in my opinion.

Ivysaur isn’t in the anime enough for me to even remember what it sounded like (Mid-evo starters get no love in the anime. They even had the perfect opportunity to give a main character an Ivysaur, twice (Ash’s Bulbasaur refused to evolve – May’s evolved into Venusaur from Bulbasaur OFF-SCREEN, but nope. Pbt.), so I had to go check. Ivysaur’s voice is mostly just a slightly deeper and more gravelly sounding voice, which is fine, but not as nice to listen to as Bulbasaur.

Dex Entries and Backstory: Personally, Ivysaur is my favorite Pokemon – really only sharing that spot back and forth with Raichu. I can’t really explain when or how Ivysaur became my favorite, but I’ve always been a huge fan of it.

Ivysaur’s Dex entries are usually off-shoots of Bulbasaur’s, explaining that the bulb on its back has now turned into a flower bud. The bud absorbs nutrients from sunlight much in the same way the bulb on Bulbasaur’s back did, and it will start to bloom when it’s fully grown, IE ready to evolve. It’s also said to be close to blooming/evolving if Ivysaur starts spending much of its time laying in the sun.

Due to the large flower bud on its back, it can no longer stand on its hind legs (so it can’t look weird in Red and Blue….well, weirder.) and now its legs and trunk have started to become much stronger in response.

Finally, Ivysaur’s flower bud emits a very pleasant and sweet aroma, which is more just a note than anything else as it doesn’t appear to have a function. 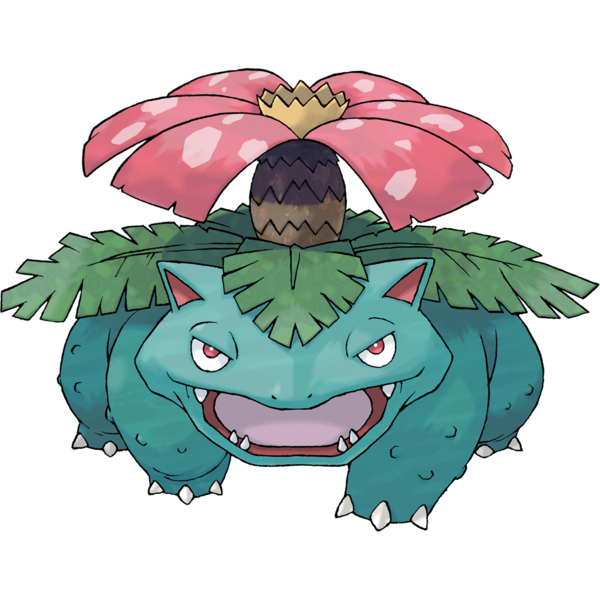 Name: Venusaur’s name keeps the saur=lizard theme, and the ‘venus’ part is referencing the Venus Fly Trap, which I find odd because Venusaur’s flower in no way looks like a Venus Fly Trap. If anything, it always reminded me, oddly, of the Corpse Flower.

At least with Ivysaur, its leaves looks somewhat reminiscent of ivy leaves.

Venusaur’s name is alright, but it never hooked in with me that much.

In the original Japanese, it’s called Fushigibana, but which is a pun on the phrase Fushigi no hana – or Strange flower. I like Fushigibana. It brings back the bounce that Fushigidane had – in fact, I’d say it’s even bouncier.

Fun Fact: In French, it’s called Florizarre, which I find difficult to pronounce for some reason, and in Mandarin, it’s Miàowāhuā or Wonderful frog flower.

Design: I’ve never been a huge fan of Venusaur’s design. The flower doesn’t look all that great, the angles of the face, particularly the eyes, don’t sit well with me, and the wart-like bumps put me off, but if there are few Grass Pokemon that give off a feeling of the pure power of nature, it’s Venusaur.

In Bulbasaur’s Mysterious Garden, a Venusaur is basically portrayed as the king of this forest. Its voice even causes a tree to immediately blossom. This thing is huge, looks like a reptilian or amphibian powerhouse and, as we see in the manga, it looks like a sneaky Bulbasaur when it has its flower closed. 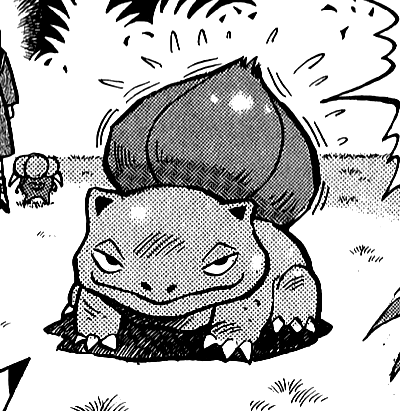 It’s still my least favorite of the three final evo Gen 1 starters, but I’ve gained a better appreciation for it over time.

Sprite-wise, we’re going pretty good in Red, Blue and Yellow, but Green looks like it was, again, run over by a truck.

The back sprites of the early games were just sloppy. You can barely tell what that is.

Other than Crystal’s animation looking like it’s winking at me,

and Black and White’s randomly getting its groove on,

the rest of the sprites are very good.

However, the back sprites of the most recent games….let’s just say, I don’t think Venusaur is meant to show so much ass. 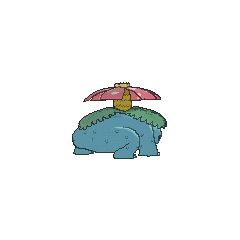 I feel about the same way towards Shiny Venusaur as I do Shiny Ivysaur mostly because the changes are identical. It gains a light/lime green skin color with a yellow flower. Though, the flower for Venusaur is slightly more golden looking, making it seem slightly a little better than Ivysaur’s to me. 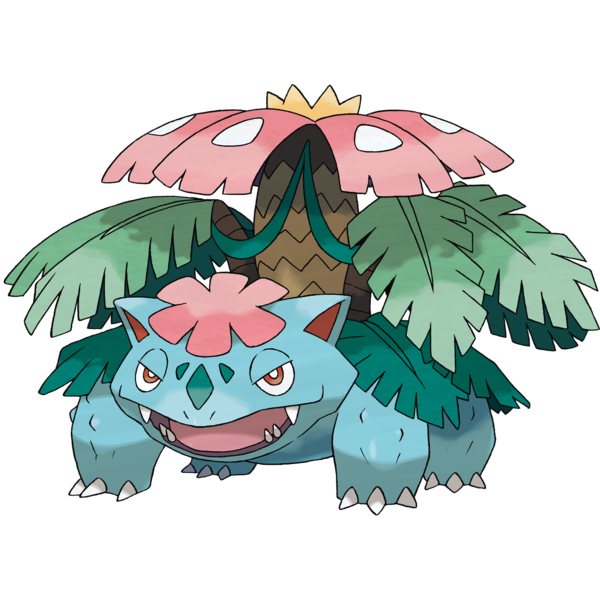 Mega Venusaur was one of the first Megas I ever saw and….I was never a fan. They added more plumage, put a flower on its head, marked its face up a bit and put some vines in there. Sadly, I have not gained a better appreciation for Mega Venusaur over time. There are much better looking Megas out there, and, frankly, Venusaur’s somehow looks both cluttered and lazy at the same time. I prefer the regular version of Venusaur.

Cry/Voice: I’m okay with Venusaur’s cry, but it doesn’t have a deep enough tone or enough oomph for me to be impressed with it. Its anime voice is a huge step in the right direction. It’s deep toned, powerful and fitting. The only gripe I have is that it sounds a little goofy while saying ‘Venusaur’, particularly when yelling it.

Dex Entries and Backstory: Venusaur’s Dex entries are kinda boring because they say almost nothing different from Ivysaur’s except that the little flower bud is now a huge flower. Venusaur is also noted as being more powerful in summertime due to the energy it absorbs from the sun, but why can’t that be said of Ivysaur and Bulbasaur?

Other than that, the sweet scent emitted from the flower, stated in Ivysaur’s Dex entry, is said to soothe people and Pokemon. I prefer that the anime adds that it has somewhat of a power of nature, because that makes it seem a lot cooler.

Next entry: the Charmander line.