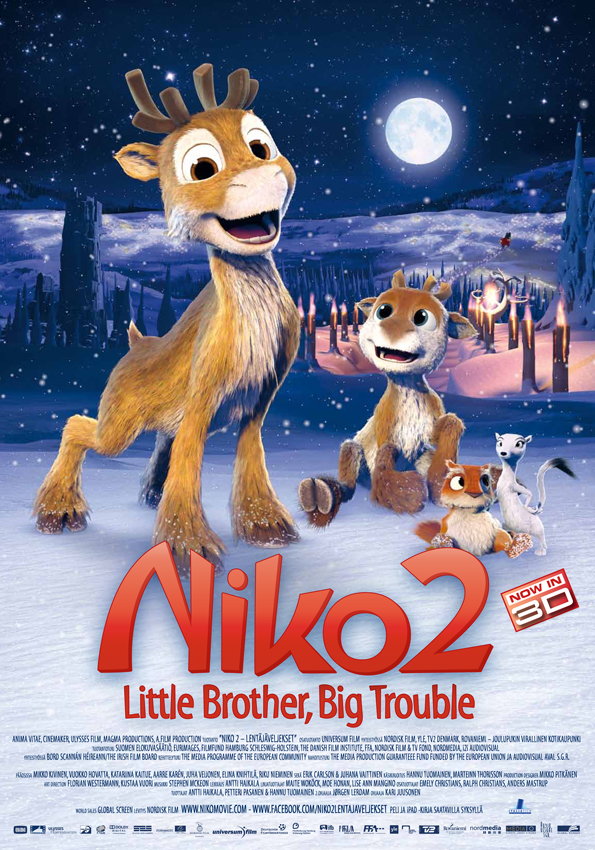 Plot: Niko has been spending a lot of time with his father, Prancer, since last year. However, his mother’s none too keen on Prancer letting him stay out late or trying to go Santa Speed. Despite this, Niko still wishes for and believes that his mother and father will get back together some day.

When Oona reveals to him that she is indeed interested in bringing a father figure back into their family, he is ecstatic since he believes his mother is getting back together with his father. However, he’s quickly crestfallen when he discovers that not only are both Oona and Prancer uninterested in getting back together, but the father figure Oona had in mind was a reindeer named Lenni.

Niko is clearly upset at this news and becomes even more devastated when he learns Lenni has a young son named Jonni. Not interested in gaining a new dad or a new little brother, Niko pushes both of them away as much as possible. But when he tries to ditch Jonni during a game of Hide and Seek, Jonni gets taken away by eagles who are working for Black Wolf’s vengeful sister, White Wolf, and it’s up to him to be a good big brother and get Jonni back.

Breakdown: Last year I talked about how Niko and the Way to the Stars was a welcome surprise in the holiday movie genre. It wasn’t a masterpiece, but it was a thoroughly enjoyable little family movie for Christmas.

Niko 2 is also a perfectly enjoyable movie, but it’s only barely Christmassy and it’s not really as good as the first one.

Much of the movie focuses entirely on a plot that has absolutely nothing to do with Christmas. In fact, the Flying Forces and Santa and Christmas as a whole seem really tacked on. Prancer and Oona butt heads, but they never settle things between them. Niko and Prancer only spend the first scene together and then nothing.

They never would have revisited the Flying Forces or Santa’s Fell again after the first act unless two stupid things didn’t occur. First, White Wolf decided to get to Niko through his father, which is why she and the eagles attacked the Flying Forces. Piss poor excuse to get them involved. It’s really such a bother to catch one flying reindeer fawn who can’t even go Santa Speed so target the Flying Forces?

Second, Julius decides to lie about Jonni being taken to Oona by saying Prancer and Niko decided to spend time with Jonni, basically pinning responsibility for the whole thing on poor Prancer, a guy who is seemingly trying to be a good dad to Niko but keeps getting the short end of the stick. (And, what’s dumber, Julius basically becomes an honesty advocate and head shaker towards Lenni and Niko for continuing the lie HE made in the first place)

Not to mention, Santa’s Fell somehow feels even worse this time around. It never seemed too fantastical, but the factory is a lifeless toy factory with literally no one in it. No elves, no nothing. It’s self-running and maintaining equipment apparently. Santa makes a brief appearance cloaked kinda in shadow just to say hi to Niko and reunite with Tobias. And Niko visits his dad all the time but it seems like Santa hasn’t seen Niko in ages.

Well, if Christmas isn’t a big highlight, I guess the only thing we can bank on is the main plot. As a whole, the main plot isn’t that bad. It’s a predictable cliché from start to finish, but it isn’t that bad. I never felt bored or annoyed for the most part, and it’s totally harmless. However, I have to call out some laziness in the conflict.

First of all, the antagonist being the sister to the antagonist from the original movie, wanting revenge for their death; wow, that’s Disquel levels of unimaginative.

Second, the eagles are a total joke. At least Black Wolf and his pack were kinda threatening in the last movie. The eagles are just complete comic relief. The only reason White Wolf even has eagles as a posse are to get to Santa’s Fell without going the same long route Niko took in the last movie. And yes, the eagles carry her like a fish to Santa’s Fell. It’s a bit ridiculous.

Third, White Wolf is in no way scary or threatening. She’s a ‘hands-off’ ‘let my minions do everything’ villain. At least Black Wolf was proactive for the entirety of the first movie. White Wolf just sits in the shadows of the eagles’ domain and commands them to do things for half the movie. She’s not even commanding the eagles out of respect or fear, she manipulates them because they have a crush on her and later because the Flying Forces banned them from the skies for no given reason. Her eyes don’t even constantly glow like Black Wolf’s. Guess that trait wasn’t genetic.

She also wasn’t taken care of in a decent manner. She’s basically tied up and that’s it. I guess she’ll just die of starvation or else the plot really isn’t over since eventually she’ll get out of those ties and go after Niko again, even more fiercely.

Lenni and Jonni are both perfectly fine new characters. I was really worried they’d make Lenni out to be a secret jerk and then Oona and Prancer would get back together or Jonni would be an annoying little brat and I’d end up wanting to play reindeer games with his face, but they’re both perfectly nice characters.

If anything, Oona’s the one I’m more annoyed with this whole movie. She obviously sees how much Niko loves his father and wishes they got back together, so what does she do? Instead of sitting him down gently and explaining that she and his father will never work and he should learn to love their slightly disjointed family and maybe learning to lay off Prancer and then later leaning into ‘Hey I’ve been dating this new guy….’ what does she do?

One day, out of the blue, after essentially leading Niko to believe that she and Prancer will be getting back together by being vague in their conversation and not disclosing who she’s talking about, she reveals that she’s been dating Lenni behind Niko’s back for some time now and that he’ll be moving in immediately. Oh and also, he has a young son, he’s Niko’s little brother now. Deal with it.

Then she pretty much expects Niko to be instantly fine with all of this, even though it’s clearly bothering the hell out of him. She briefly speaks with him about it, but it’s, again, basically just expecting that Niko will be fine with everything.

When Lenni lies to her about the situation with the boys, he says he wants to go up to Santa’s Fell to confront Prancer and she’s all ‘Whoo! I’ll go with you and give my two cents!’ Whoo yeah, he needs a talkin’ to what with his mild leniency with Niko; having fun with him and spending time with him and training him in flying and whatnot. What an ass.

Also, the reason Lenni and Jonni suddenly moved in is because she’s pregnant with Lenni’s kid. They give ‘subtle’ hints at it throughout the movie, but it’s obvious she’s preggers and both Lenni and Oona know and have known for a while. And she never tells Niko. She had to have told him some time between the final climax of the movie and the birth of the kid at the end, but she doesn’t mention it before then. Mother of the year.

We get another new character in the reindeer, Tobias, who is a pretty old reindeer living by himself out in the wilderness. His shtick is Mr. Magoo. He’s blind as a bat and frequently does silly things because he can’t see well. Also, he’s kinda looney. I went back and forth with liking Tobias. On one hand, he can be funny, but on the other hand his shtick is horribly cliché and one-note. On one hand, his backstory is kinda interesting and his life at the moment is a bit sad, but on the other hand his backstory kinda doesn’t make sense and is a bit dumb.

Last note, the thing with Niko attempting to go Santa Speed is arguably the most predictable part of this movie. It’s completely obvious that he will be able to do it by the end.

The art and animation are about on par with the original movie’s, though the lip-synching is noticeably worse.

The voice acting is alright, though, again, the emoting and vocal volumes need work.

The music is completely forgettable, and we don’t even get a song from Wilma to spice things up.

Bottom Line: I have more problems with this movie than I did the last, but it is a perfectly fine movie. If you were a fan of the original, give it a shot. If not, skip it. Also skip it if you’re looking for a fun Christmas movie. Despite the tagline being ‘A Christmas Adventure’ there is a staggering lack of anything really Christmassy. If anything, it seems to purposely skip out on it, and the stuff they do include seems really forced.