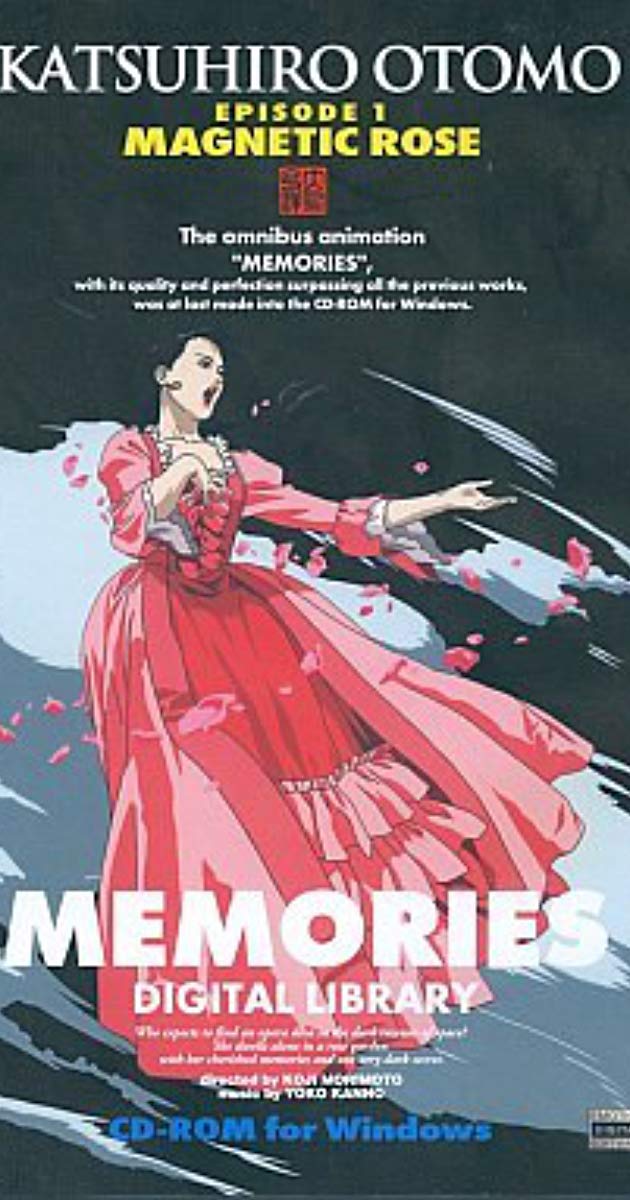 Plot: The Corona is a ‘garbage’ ship in the outreaches of space. The captain, Ivanov, is about to head home when Aoshima, their tech specialist, notices an SOS signal. They don’t want to investigate, but fear the repercussions for ignoring a distress call, so they decide to give it a quick check. Ivanov sends his two engineers, Heintz, a serious worker and family man, and Miguel, a goofy womanizer, to explore the odd cluster of debris where the signal is originating only to be astounded when the inside is revealed to be a magnificent mansion where holograms, hallucinations and fake décor are peppered throughout. Who is sending the SOS, and is it really a call of distress?

Breakdown: Memories is actually an anthology film, but I felt it better to review each section on their own.

This project has a lot of talent attached to it. It was produced and based on a manga written by Katsuhiro Otomo, most famous for writing and directing Akira, as well as directing Steamboy and doing the screenwriting for Metropolis,. There’s also, of course, the marvelous Satoshi Kon, creator of works such as Perfect Blue, Millennium Actress, Tokyo Godfathers and Paranoia Agent.

The talent is definitely reflected here, because the film is off to a strong start with this episode.

It’s a haunting and intriguing tale from start to finish. The characters’ memories and even Eva’s, the lady of the ‘house,’ are manipulated, used and warped to suit Eva and seemingly the station’s desires.

The movie does a good job of connecting you with the characters from the getgo, allowing the film to be filled with tension and be immersive. There are also several aspects of mystery along the way – not just with Eva, but also with Heintz. A particular revelation with him was heartbreaking when I realized it was a real memory and not a manipulation.

The art and animation are fantastic….barring the CGI, which hasn’t aged well. It stands up well against other 1995 CGI, but by today’s standards it’s downright ugly sometimes. Luckily, it’s not very prominent throughout the episode. Only the shots of the station itself and some action shots are noticeably CGI.

The music is beautiful and very impacting. I particularly enjoyed the song at the very end. Yoko Kanno did the music for this segment, so the quality is no surprise.

Overall, this episode is wonderful and a great start to the movie. However, I am a bit wary of the other two entries as they’ve been noted as being much weaker than Magnetic Rose. Hm.

Additional Information and Notes: Memories Episode 1 – Magnetic Rose was directed by Koji Morimoto, who also directed the Beyond segment of The Animatrix and did animation work on Akira. He also co-founded Studio 4°C – the company that produced Memories. The screenplay was written by Satoshi Kon.

The entirety of Memories was based on a manga by Katsuhiro Otomo.

Recommended Audience: There’s one fly-by shot of naked breasts via a photo Miguel has, but it’s literally on screen for about a second. Other than that, there’s some corpses and skeletons lying around and a kid is shown to semi-graphically die from a fall. 10+