I really struggled with this one since I really couldn’t think of a good entry. Either I was thinking of shows that were terrible but had a good following or were not bad enough for me to really get salty over and were barely known.

So I sifted through some stuff and came across something that I think fits well – Dragon Ball GT. 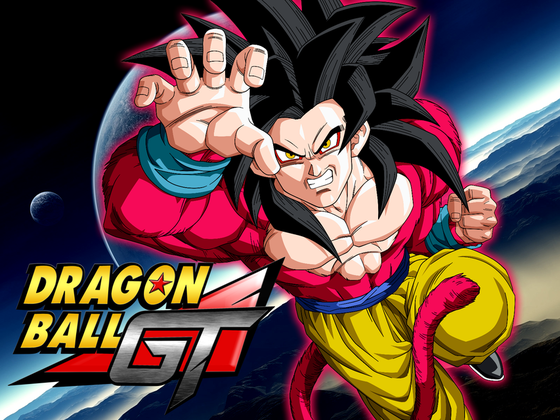 Every franchise has their black sheep, and this is… 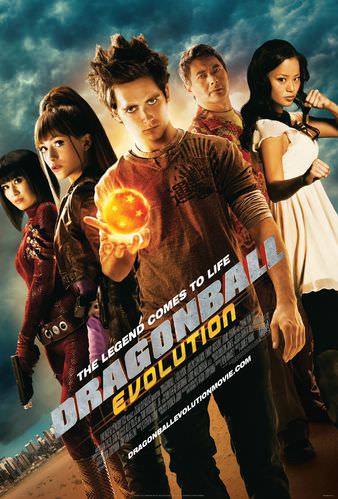 Dragon Ball GT is ‘that series we all gleefully accept as non-canon.’ Akira Toriyama even claims it’s just a ‘side story of the original Dragon Ball Series’ Back in the day, before Kai, before Super, before the new movies, this is what we had as our ender for the beloved Dragon Ball franchise.

Admittedly, I found out that, somehow, GT is more popular in the west than it was in Japan, but it still stands as being, by far, the least popular animated entry in the entire franchise and one of the more critically slammed mainstream anime. Even THEM anime reviews only gave it a one star.

I loved Dragon Ball and DBZ when I was younger. Still do, to a degree. And when I heard they were coming out with a new series, I got hyped. When I finally got to sit down and watch the premiere, I was underwhelmed but I kept watching. I watched fairly regularly for about 20 episodes and then it was put in the ‘catch it when you see it on while channel surfing’ bin. I did watch the whole series as it reran….I think. I probably missed some of the dragon ball hunting ‘filler’. I followed the story off and on, I watched the ending and I was very sad that this was the end of DBZ.

It went out with a….

GT got off on the wrong foot right out the gate by having Akira Toriyama almost completely uninvolved in the project. It wasn’t based on any manga he had written for the series and he didn’t do any writing for it. He came up with the name and he designed the main cast character designs.

The aim of the show was to capture the original goofiness and comedy of Dragon Ball while still trying to keep the pace of the intensity from Dragon Ball Z. In order to achieve this, they returned Goku to a child state, which is pointless because he still kept his adult mentality, which is basically just a slightly more mature child mentality, and they include Goku’s granddaughter Pan, who I will rant about later. With them is Trunks, who is a glorified babysitter, and Giro, who can die in a pit.

Together, they travel the universe looking for the black star dragon balls because, if they don’t find them all within one year the earth will explode. You may be asking why such a condition would exist. Well, you’d be one of many.

The focus on the dragon ball search is another aspect they brought on from the original series, but it doesn’t work very well because their adventures are boring and lack the charm and fun of the original Dragon Ball.

Everything about this series just seems blah from the art to the music, which also isn’t performed by the original composer (and included the GT rap. Remember that? No? Merry Christmas!

Mmm look at the CGI Shenron. That is some delicious horribleness. Num num num.)

The characters are shells of their former selves, nearly all of the human characters are so old they don’t get to do a damn thing, even, somehow, less so than in DBZ (Oh wait, Krillin gets to do something…..He dies again….Just as a catalyst to get 18 into the fray.) and the villains are all completely uninspired in both design and characterization. Besides Baby, name two original GT villains. Go.

A good chunk of them are just reworked designs of existing characters like Android 17, Dr. Gero and seven different iterations of Shenron, none of which look good.

Oh well, at least he made Vegeta look like an unrecognizable eye sore. 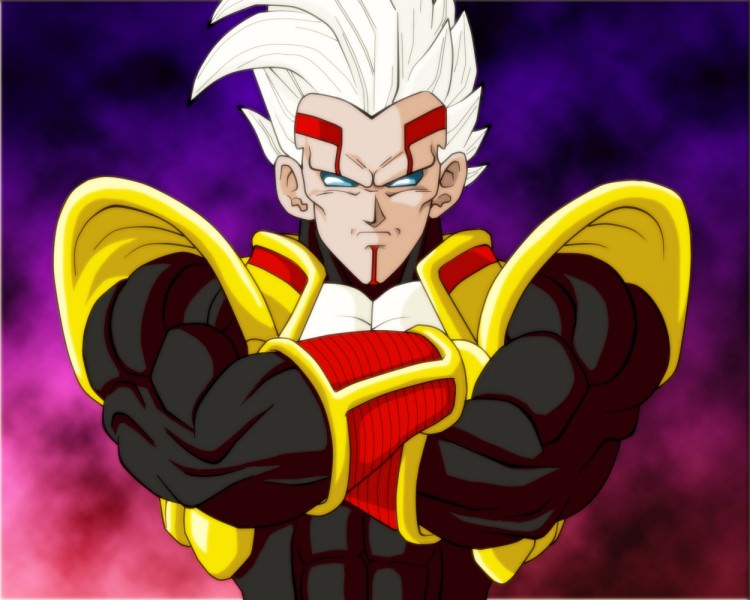 I will admit two things – I was always fine with Gogeta, even though he looks too much like Goku, and I thought SS4 looked incredible. The melding with the ape aspects worked very well to me, and I really liked the black and red color scheme….Don’t understand how he got new clothes from the transformation, though. I can justify new clothes through fusion (the clothes fuse too?) but not transformation.

Other than that, though, hardly anything in this series worked, and it ended on yet another ‘Goku’s an asshole husband and father’ note by having him leave AGAIN – this time for 100 years! His wife and children all died in that time and he only came back for his great-great-great-great grandson’s first world tournament fight. You can argue that he had to leave, but there are so many loopholes in that theory I can’t believe it for a second.

And, just because this is a challenge about saltiness, let’s bring up Pan. 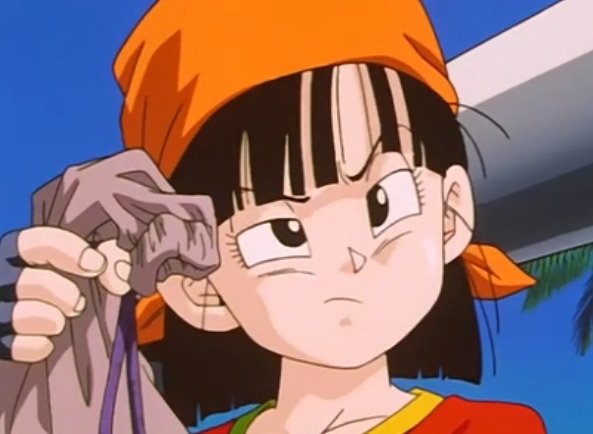 Pan, sweetie! Congrats! You’re our first female Saiyan (hybrid at least) in the series! We’ll be sure to give you interesting storylines, some cool unique powers, at least a few awesome fights, and we’ll certainly get you to at least Super Saiyan 1 form…..

We won’t do any of that.

Instead, let’s make you a useless uninteresting pile of child who hardly ever fights, doesn’t do anything to contribute to the main storyline (besides helping Goku control his ape form with her tears…Great, Pan. You’re Princess Peach – one of your main abilities is to cry.) and never…goes….Super Saiyan.

That’s the thing I’ve always been saltiest about with this series. Pan has a desire and ability to fight. Why not at least let Pan to get base Super Saiyan form?

Here are the most common responses I’ve gotten to this question.

This one, as sexist and stupid as this is, may have been feasible back in the day, but not now. Today, we know that female Super Saiyans do indeed exist. Their vaginas do not affect their ability to transform.

Goten and Trunks did it when they were her age or younger. Granted, they are ½ Saiyan and she’s ¼, but we’ll soon discuss why this isn’t a factor.

– Akira Toriyama admitted that he can’t figure out the design of female Super Saiyans.

This one was the most common response, but again, stupid.

Can’t design female Super Saiyans? Mr. Toriyama, are you saying you don’t have the artistic capabilities of half the people on DeviantArt?

I really just feel like he never gave it much effort or didn’t want a female Super Saiyan until many years down the road where he felt like he had to.

Unless it took him 20+ years to ‘perfect’ the style of the female Super Saiyan.

Here’s an excerpt from the Wiki.

All of this just reeks of laziness to me, if it’s accurate. There’s no reason why female Super Saiyans would ever have that much differentiation in their designs than males. And now we know for a fact that there isn’t any difference at all, except MAYBE, just maybe, their eye shape, and that’s slight. 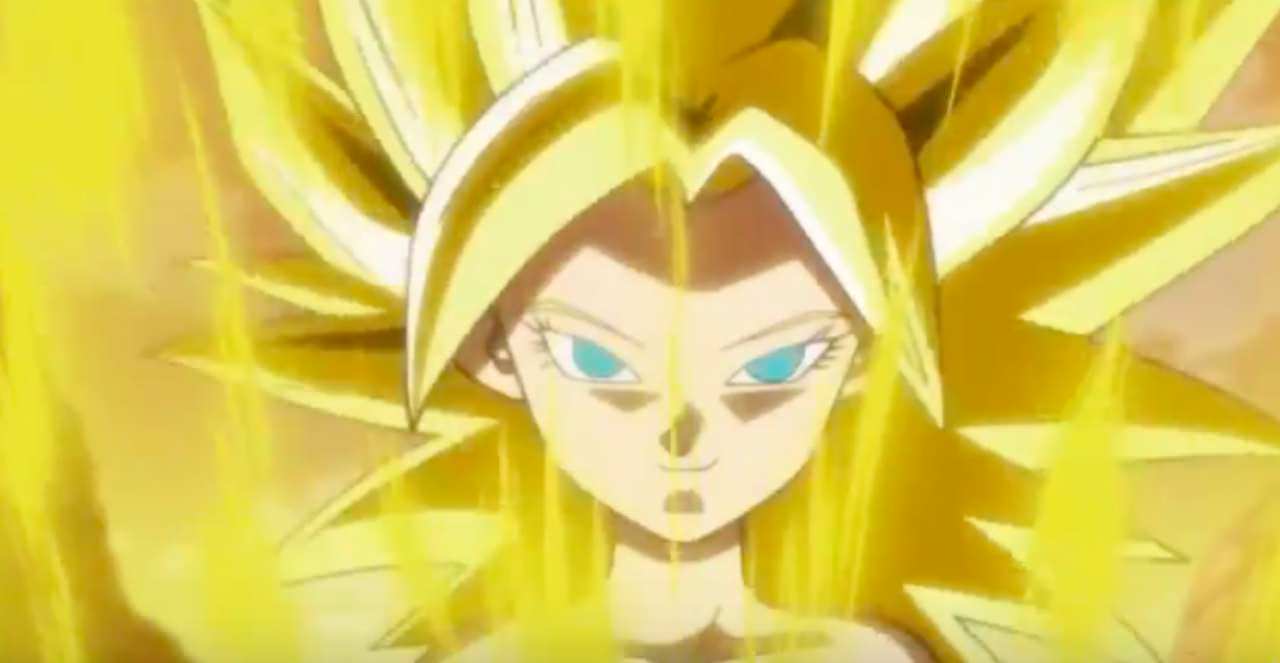 Or, hey, make a design of your own and run it by Toriyama. He’s in communication. He’s making some designs.

It’s understandable that Bulla never did it because she has no desire to fight nor is she trained to do so, but there’s no excuse for Pan.

It irritates the hell out of me and comes off as more laziness that they went ‘well, Goku Jr. and Vegeta Jr. basically have their Super Saiyan designs already made for them since we copy-pasted their base character designs, so let’s have them transform and never explain why Pan can’t do it.’

It’s just very irritating because Pan was the first ever main-main character who was a girl and a fighter that wasn’t an enemy, but they did nothing with her. 18 at least got to jump into the fight again, but that was much too little far too late.

It’s such a bitch to be a female DB fan sometimes. Really the best female role model in DBZ is Bulma, who is admittedly pretty great sometimes, but doesn’t get to do a lot besides provide technical support. It was also sad to lose her for the dragon ball hunting considering she was the original dragon ball hunter in the series.

GT had an opportunity to be an epic return to form and close out the franchise in a way that would make fans proud. Instead it’s the series that fans reject, and even Akira Toriyama seems to be desperately trying to erase this from any semblance of canon. Toei’s staff tried way too hard to be Akira Toriyama and yet they didn’t try hard enough to match either Dragon Ball or DBZ and completely failed at being a combination of both.

…..Oh yeah, and Uub amounted to nothing special too. Glad those years of abandoning your family, again, paid off for you, Goku.