Skip to content
HomePosts tagged 'I really want to know what it would look like if Hell Girl and Shinigami no Ballad crossed over.' 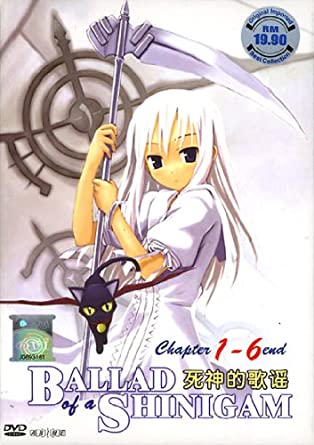 Plot: An episodic anime about a kind shinigami clad in white named Momo and her cat Daniel. While their main job is to ferry souls to the afterlife, Momo also likes to help the souls that she ferries with any unresolved issues left behind in the land of the living. She likes to help the living move on past the deaths of loved ones as well.

Momo is also a tragic character, but you only get that from the opening theme song because we don’t really learn anything of Momo’s story, unlike, in the opposite extreme, Ai from Hell Girl. I guess in some ways Momo wants to be a part of the living world, but can’t. However, she is very dedicated to her goal of helping as many people that she can. I really liked Momo, she was a very sweet and caring character.

Music: I really liked the music even if Nihon Reviews said it was the worst part of the series. It may seem out of place on first hearing, but it fits pretty well with the show as you continue to listen to it. Both the OP and the ED were really good, even if I think the pacing of the lyrics in the OP are a little too slow, and the BG music was memorable and enjoyable.

Bottom Line: If you can stand up to a little depression and a lot of talk of death, this is a pretty good series. I wish it had gone on longer and that we had gotten really anything of the story behind Momo’s drive to do what she does or her character at all. It’s also a really short series at six episodes when the series could have the potential to go on for much longer. Hell Girl got four seasons yet this only gets six episodes. However, that does also mean that it’s a fairly short watch, and well worth the time.

It was produced by the now defunct Group TAC, who also helped produce Space Battleship Yamato, Space-Time Detective Genshi-Kun (Flint the Time Detective) and Grappler Baki. They worked alongside Ginga-Ya, who also did some animation work on Angel Beats!, Five Numbers!, Terror in Resonance…..Oh and Yosuga no Sora. There is an English dub available of this series, and it is currently licensed in North America by Maiden Japan.

Other than that, though, no questionable content. No sex, no swearing, not even drinking. Though the heavy aspect of dealing with death might skew towards an older-ish audience. 10+?