Skip to content
HomePosts tagged 'I really can’t tell you how bummed I am about the disappointing Mew Aqua Rod uses. SO much room for creativity and it was all wasted.'

Plot: Aoyama/The Blue Knight finally joins the ranks of the Mews, but things take a turn for the worse when Kisshu and the other aliens reveal a dark secret that leads to the awakening of their leader, Deep Blue.

– The anime and manga vary quite a bit in Shirogane’s backstory. He was never bullied, and, sadly, he had a pet dog named Daisuke who also died in the big explosion at the lab. Shirogane was actually home when the lab exploded. Both he and Akasaka witnessed it. 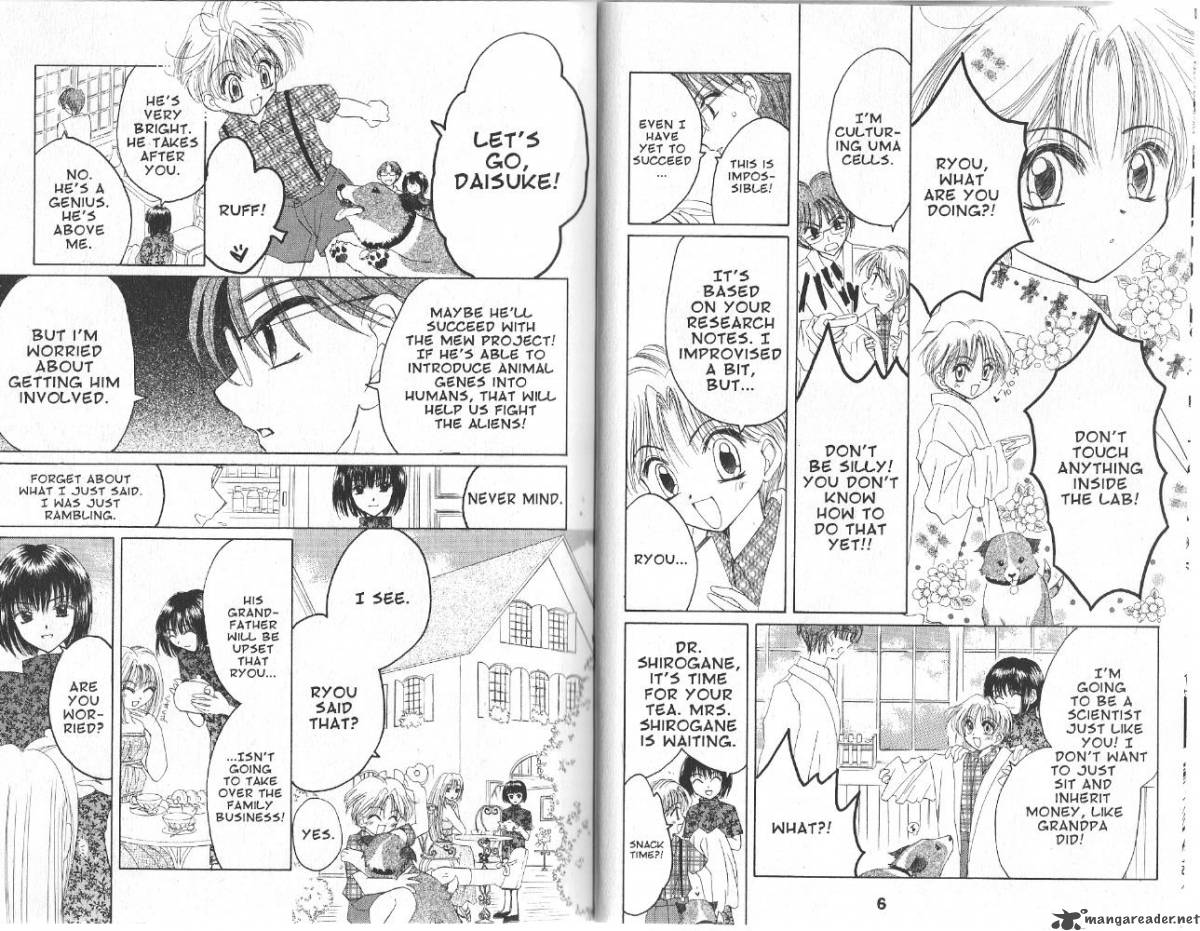 One change might have also fixed a big problem I had with his anime backstory. In the anime, the lab was attacked by a supposedly fire-based (?) Chimera Animal that just attacked the lab, killed everyone in it and then disappeared forever. This bugged the hell out of me because we never see this Chimera Animal again (until the very end of the show). It was supposedly freed from a fossil Professor Shirogane was experimenting with, but we have no idea why it attacked everyone nor where it went afterwards.

The manga gives no reason for the explosion, which is also a problem but not as bad.

The rest of the story and the scene afterwards goes exactly the same between anime and manga. (However, I’m still left wondering why and how Shirogane can transform into a cat at will and seemingly doesn’t need kissing or adrenaline to do it.)

– Aoyama’s dream of Ichigo is a little different. They’re both still images of her crying, but the anime has her in her Mew gear crying on the floor….The manga has her in….. 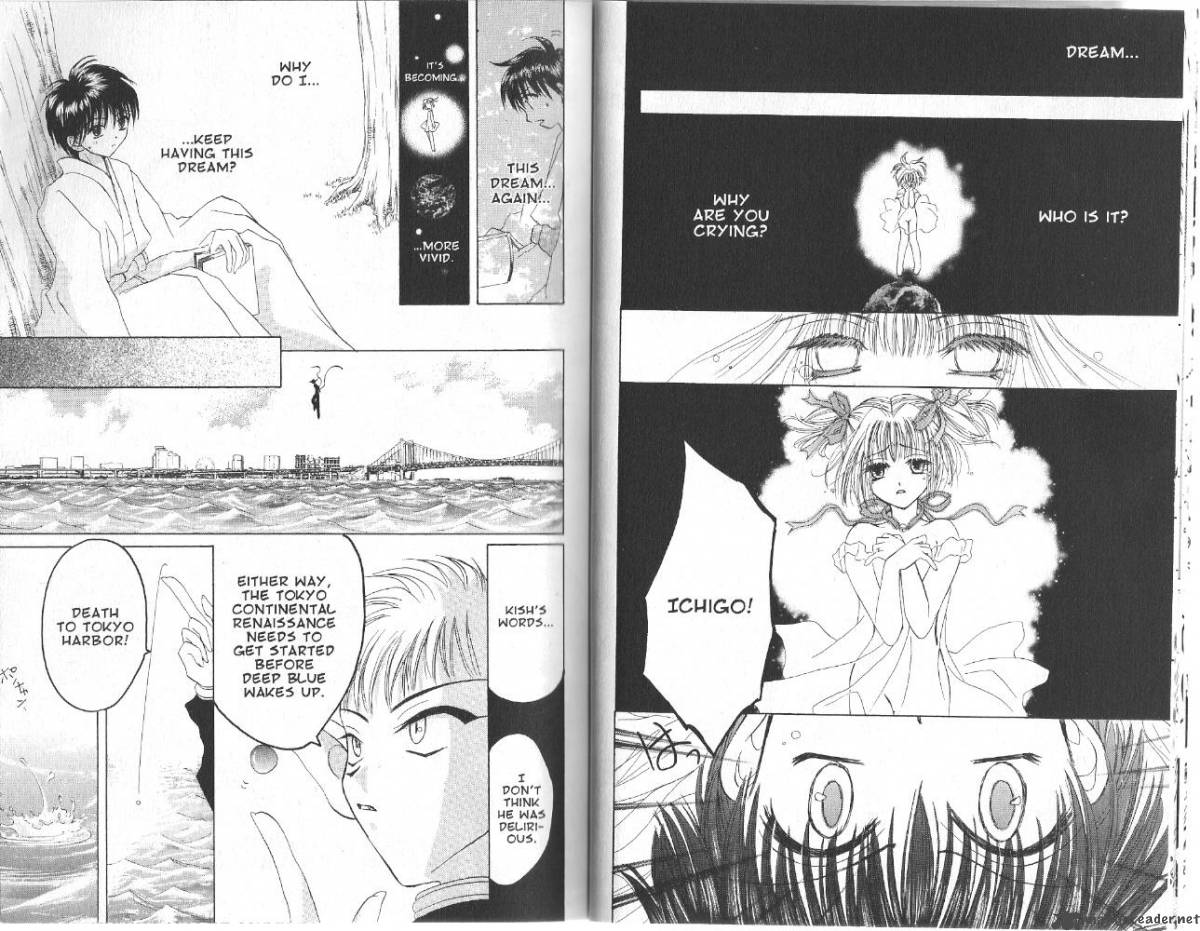 Is that lingerie? It’s very flowy and see-through. Am I reading too much into this? What is up with her pose and expression? She doesn’t look like she’s upset more than she looks…I dunno, drugged? In the anime, she’s practically bawling while kneeling on the floor, and that’s much more impacting if you ask me.

– Okay 1) I guess Lettuce doesn’t need Mew Aqua to become a mermaid. It’s just something that happens to her when she’s transformed and she enters the water, which is cool, but obviously something the anime didn’t keep – in fact, they pretty much spat in her face in that regard by making her unable to swim….

2) Her Mew Aqua time to shine was boring….I am starting to get a little tired of the Mew Aqua Rod shtick in the manga being a constant ‘I feel it calling out to me.’ *goes to it* ‘Mew Aqua Drops!’ *end* I was going to keep giving the manga props for at least letting the others girls use the Mew Aqua Rod when the anime gives them nothing, but your props are running thin if you’re just going to do the same song and dance every time. It’s like they did something cool with Mint, similar but still pretty decent with Pudding and then just gave up and was like ‘eh just do the same thing two more times,’

– In addition, they basically mixed the episode where she saved Shirogane and used the Mew Aqua with the episode where Pudding and Taruto fight for the fake Mew Aqua in the river, and it somehow purified all of the water even though it was fake. Only the manga’s version is less interesting….

– It’s at this point where I realized something very important. I was under the assumption that the manga did the other girls more justice because I knew they all got a turn with the Mew Aqua Rod, but we’re already well into the final two volumes of the manga and I can’t help but say….the anime did them more justice – at least so far.

The other girls are literally set dressing most of the time, and because there’s a lack of filler, there aren’t nearly as many stories about them. In fact, beyond their debuts and the Tokyo Dome storyline, there really haven’t been ANY stories actually about the other girls throughout this entire manga. It’s all been Ichigo, Aoyama, Kisshu and the Blue Knight with some Shirogane.

Yes, you heard me, filler actually worked in the anime’s favor.

It’s quite possible they at least get some better time to shine in the finale, but I’m not holding my breath.

– Her finding out Aoyama’s identity was very similar to the anime, but, again, done in a less interesting manner. Kisshu didn’t go insane and they both kinda left in the middle of the fight.

– What was I saying about the other girls not getting to do anything? As they get overrun by Chimera Animals (off-panel) Ichigo comes in to save them. She needs the help of all of them!….To gather their powers, give her a super special new weapon and attack and save the day.

– Hah, Taruto calls the guy who is supposed to be their savior ‘geek.’

– There’s a plotline that didn’t make it to the anime. The aliens set up a dome over Tokyo. It’s an impenetrable force field that increases the internal temperature until it’s too hot for any living being within it to survive. And just to get more environmental messages in there, they point out that using the AC will just cause the temperatures outside to rise even more.

– Aoyama’s backstory remains the same, but unlike in the anime where he conveys this information to Ichigo, in the manga he’s just saying this stuff to himself, which, in my opinion, isn’t preferable. I liked that he was sharing that part of himself with Ichigo, especially considering that she needs to know stuff about his past and feelings if they’re going to be together for the rest of their lives. Plus, it was just a nice overall moment for the two of them. Him just saying stuff he already knows to himself is pointless other than informing the audience about it.

– Even though Kisshu doesn’t go hilariously/sadly insane like he does in the anime, he does emotionally break down when Ichigo refuses to love him or be with him. He tries to strangle her but then breaks down crying wondering why he can’t get her to do what he wants or love him back. When he releases her and tells her he’ll buy her some time before everything goes down, she wonders if he truly loves her…..Uh no. No. He just strangled you, and has tried several times to kill you. There is no love here. Only obsession and a deep desire for control.

I would say maybe his species doesn’t understand emotions such as love, which is why he’s so bad at expressing his emotions for her, but I can’t imagine that’s the case. Afterall, the main reason they’re all on earth in the first place is for the love of their friends, family and species, right? And if he were completely ignorant of how love works, he wouldn’t do legitimately sweet and romantic things sometimes. 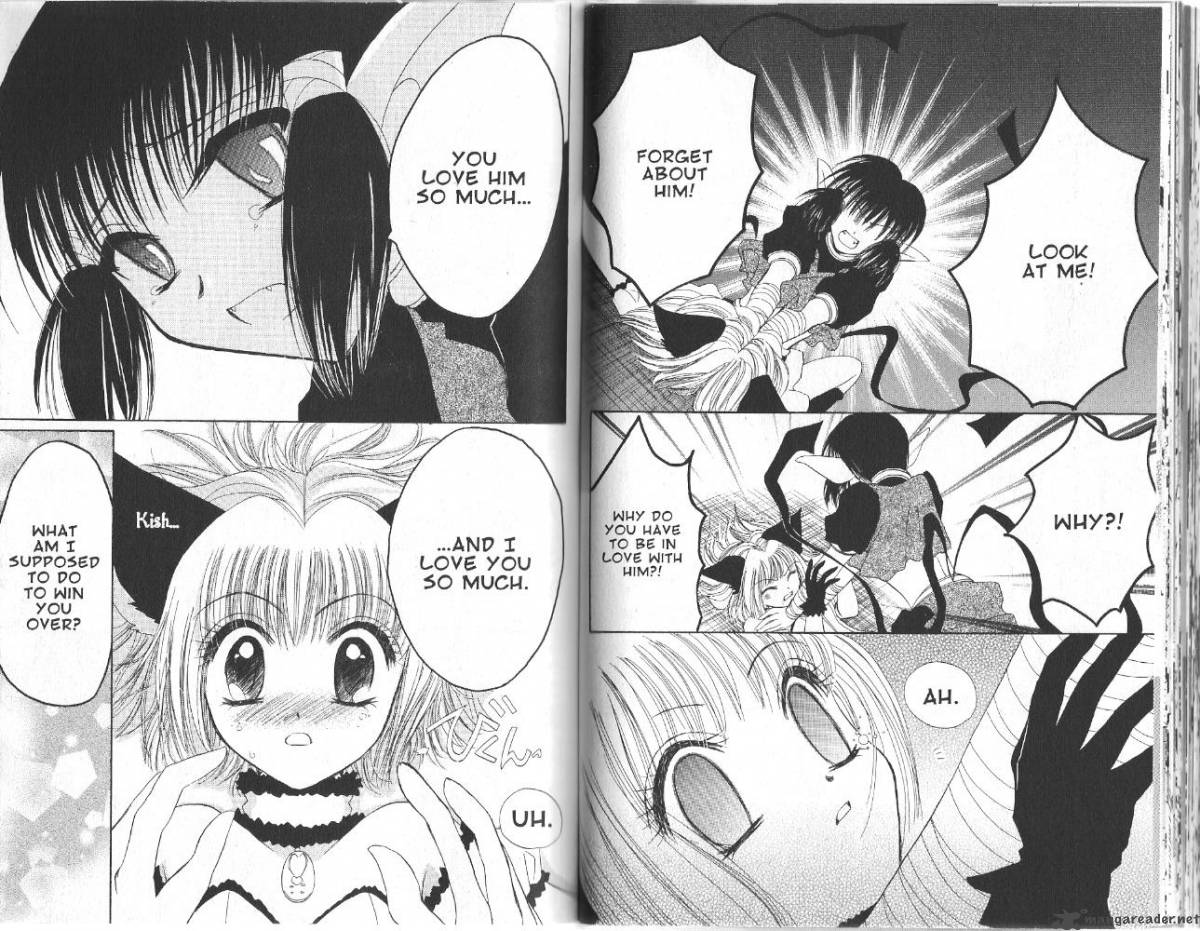 – In the manga, The Blue Knight actually has an attack name; Indigo Comet Blade.

– It’s….very confusing as to what exactly happens when BK and the Mews use their attack….Are they attacking Pai and Taruto? Where did they go? The dome’s not gone, because Zakuro takes care of that later. Oh look, Taruto and Pai are back immediately. What did that all-team attack do?

– There’s a manga-exclusive plotline where BK and the Mews fight the aliens in a sewer. They try to drown the Mews by flooding the pipes, but BK saves them by using his sword to slash a drainage hole in the pipe.

– Zakuro gets her time with the Mew Aqua Rod, and it’s exactly what you’d expect. Ichigo’s just like ‘Zakuro, find the Mew Aqua.’ She does and then she uses the rod and the dome’s gone.

– Ichigo’s going a bit too hard with the insinuations that she literally wouldn’t be able to fight or win unless Aoyama/The Blue Knight was by her side. Come on, girl, you’ve done it plenty of times before.

– Deep Blue’s awakening is much less interesting in the manga. In the anime, they had BK/Aoyama’s initial trigger being going insane and basically turning himself into a nuke while trying to protect Ichigo from Kisshu. Then Aoyama’s completely out of it the next time we see him, wandering around town. His soul is screwed with by Kisshu, and then when Ichigo arrives he makes the final transformation. Here, Aoyama/The Blue Knight pretty much just collapses in Ichigo’s arms because reasons and then wakes up as Deep Blue.

– Deep Blue actually draws blood on Ichigo, which I think was something that should’ve been added to the anime. He did attack her in the anime, but I think there would’ve been more weight added to the situation if he actually wounded her. Plus, that would’ve definitely been a reason for Aoyama to fight for control over his consciousness.

This is probably the most I’ve ever been skewed towards the anime side. While the manga did include some plotlines that the anime never adapted, I can’t say that anything was really lost because of it. It’s just ‘these things happened.’ Nothing in those plotlines really had lasting consequences or added anything to the story or characters.

Everything else was either done better in the anime or was basically the same level of quality no matter if it was the same or not, like Shirogane’s backstory. And if I wanted to be petty, I’d ding the manga there based on the fact that they killed a dog for no other reason beyond sadness points.

It actually makes a little impressed with the anime, in spite of its own set of prominent problems. It didn’t do anything that blew my mind with this set of stories, but it did improve upon nearly every aspect, in my opinion.