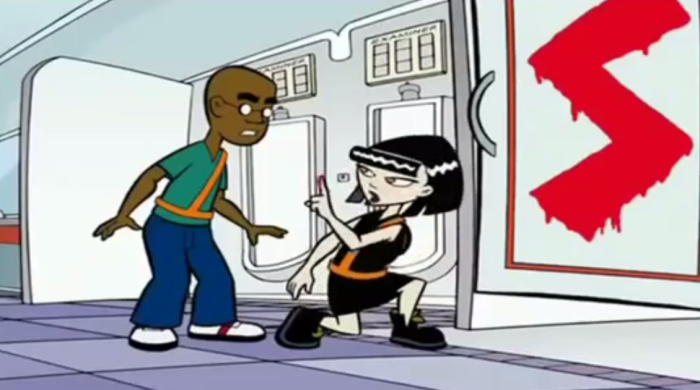 Plot: When the brand new high-tech bathroom stalls are riddled with graffiti by someone calling themselves ‘Stainless’, Fillmore and Ingrid have to enter the world of artists and taggers to find out who the culprit is.

Fillmore first aired on ABC’s One Saturday Morning as a school-themed parody of old 1970’s cop shows with the safety patrol replacing the cops. Think Recess if it was at a slightly higher age range and was a procedural drama. It was sadly canceled after a mere two seasons due to low ratings, even though the 26 episode run is essentially one season. Rumor also has it that the tone was a bit too serious and ‘dark’ for the ABC cartoon lineup. Pfft. What could possibly be dark about a show created by Scott Gimple?…….the executive producer of The Walking Dead……

Jokes aside, this show serious? Have they never heard of parodies? Yes, the subject matter they’re parodying is kinda mature, but they’re adapting it towards a tween audience. The stuff they cover in the series is ridiculous kid and school stuff presented in a serious manner – one of the main reasons why it’s funny.

I loved the hell out of Fillmore and couldn’t have been sadder when it was canceled. It’s even worse considering that the show isn’t even available on VHS or DVD. Everything about it was just so cool and funny. I loved how over-exaggerated and film-noir-ish it was. The characters were great, the setting was great, the theme song was one of the best cartoon theme songs ever, and the writing was spot-on with only some minor cheese here and there.

Well, now that I’m older and analyzing the show thoroughly, how does it really stand up?

Here’s the thing; before Fillmore I had never really watched many police shows or movies. I was a tweenage girl at the time this came out. I was more preoccupied with anime, drawing, cartoons and boy bands. Even then, I still loved this show. Now that I have plenty of police and forensic shows and movies under my belt, I actually find this even more entertaining because I can tell what they’re spoofing at pretty much every corner. I can’t tell all the references, but I can definitely play ‘spot the trope spoof.’

For instance, the crime itself is kinda played off like finding a murder scene where the murderer, who coins his own name through his signature, writes on the walls in blood….err, red marker.

In order to solve this crime, Fillmore and Ingrid recruit a master tagger and artist who is basically one big serial killer spoof. He’s kept under total detention lockdown every day after he went on a tagging spree. He’s held in solitary confinement with all writing instruments taken away from him, which must make his schoolwork a nightmare. He’s incredibly knowledgeable on his craft and loves teasing Fillmore and Ingrid with answers that he knows but refuses to share since that would just be no fun.

Fillmore and Ingrid are even police drama tropes. Fillmore is a former juvenile delinquent who became the safety patrol’s top investigator. He sips hot chocolate, makes witty one-liners, has incredible insight and is sometimes a ‘loose cannon’ who struggles with his past.

Ingrid is a new kid in school, new as Fillmore’s partner too, who is also a genius with a photographic memory, making her a fantastic researcher and sleuth. She has a goth look about her, but they don’t do anything with it. Unlike a lot of veteran cop/rookie pairings, Ingrid and Fillmore actually get along very well, which is more of a play on how procedural dramas are now with ‘tension’ between the leads a la Bones, CSI, NCIS, Law and Order SVU.

Of course, you also have to have the boss of the whole operation, in this case the Jr. Safety Commissioner Vellejo, who is usually there to scold Fillmore and Ingrid for any damage they cause while trying to catch perps and to put a fire under their asses to get the case solved quicker.

You even have the ‘politician’ or ‘District Attorney’ trope in Ms. Folsom, who is usually constantly stressing about the cases in order to keep up appearances and maintain the safety and integrity of the school. She’s also on the safety patrol’s asses to get the cases wrapped up quickly and cleanly.

We’ve got red herrings, evidence analysis, slight hints here and there throughout the episode as to who the perp really is. It is a bit easy to figure out who the culprit is if you pay attention, but it is a tween show.

This episode has always been one of my favorites because of how they portray Randall Julian, the ‘serial killer tagger’ who helps Fillmore and Ingrid, the fact that art is the main theme here, how well it sets up the series as a whole, all the while immersing you quite well in the fun world they have set up, distracting you from how silly it actually is and making it seem very cool.

Seriously, take yourself out of the show for a minute and soak in the story – they’re hunting down someone who is drawing on bathroom stalls with a marker while getting help from a sociopathic macaroni artist turned tagger with the ‘street name’ of Flava Sava with their prime suspects being a guy who likes to draw toilets and pour paint on himself, a guy whose newest masterpiece is coloring in a black dot with 1000 layers of ink and a hippie girl who poops outside because she hates unnatural things.

Also, I won’t spoil who the culprit is, but let’s just say that the actual perp is even weirder that these three.

The action is also usually creative and fun, but there’s one thing you have to keep in mind when the culprit is revealed. It doesn’t matter how far or fast they run – they’re at school. They can’t leave school grounds, and even if they don’t catch them, you can just as easily contact their parents. Really the only reason Fillmore and Ingrid need to catch the perps themselves is because Folsom is too fed up with the lack of progress in the case and threatens to shut down the safety patrol nearly every episode if they don’t have the perp by the final bell or within a day or so.

The final standoff between Fillmore and Randall Julian was also great. Hell, it was better than his confrontation with the actual perp. To be honest, the entire exchange with Randall was better than the actual plot. As a bonus, Randall is voiced by Josh Peck. And yes, it is trippy.

While we’re on the topic of the voice work, which is great, Fillmore is voiced by Orlando Brown, who does a great job bringing that classic attitude and coolness to the character. Ingrid is voiced by Tara Strong, who I don’t believe needs an introduction. And Anza, one of the background safety patrollers, is voiced by Danny Tamberelli, and if you recognize that name, you get an internet hug.

All in all, this episode was really great and I loved every minute of it. It’s just subtle enough to be a slight challenge for viewers to figure out what’s really going on while not being so complicated or even unfair in its storytelling that the viewer would have difficulty following along. The characters are all very likable, even most of the suspects and perps, and this series really did just get even better to me after I watched those procedural dramas.

Next episode, the horrors of the Satty-9.

I’m taking the meaning of this prompt as like brawl fighting, tournaments a theme etc. I was torn between two shows for this. Yu Yu Hakusho and Dragonball.

While I do truly love Dragonball, I can’t deny that Yu Yu Hakusho just has slightly more to offer in terms of interesting characters and cool powers. I didn’t include DBZ in this because, while I do like that show too, it gets monotonous after time, and the battles are drawn out too much.

Yu Yu Hakusho centers around a boy named Yusuke Urameshi who died while trying to save a kid from getting hit by a car. He’s brought back to life by a shinigami named Botan and Koenma, ruler of the spirit world, though technically a prince, under the condition that he become a spirit detective, a person with immense spiritual powers who solves cases for the spirit world typically involving demons.

He is quickly joined by his best friend/rival Kuwabara, who had heightened spirit awareness far before Yusuke, Hiei, a fire apparition and Kurama, a reincarnated fox demon.

While the animation isn’t fantastic, the fights are incredible and many of them are very memorable. My personal favorite is the Dark Tournament arc because not only do we showcase the main group’s powers, but we also get introduced to all sorts of different demons and abilities that constantly change up the battle. There’s a couple other tournament arcs, but I find the Dark Tournament more diverse and interesting.

The characters are really memorable, even if Hiei really gives off a Vegeta vibe, only without the rivalry with the main character, and the storylines, while not being insanely original, are also memorable and well-written.

It’s just an overall great fighting anime that I’d be glad to recommend to anyone.