Skip to content
HomePosts tagged 'a true story of children' 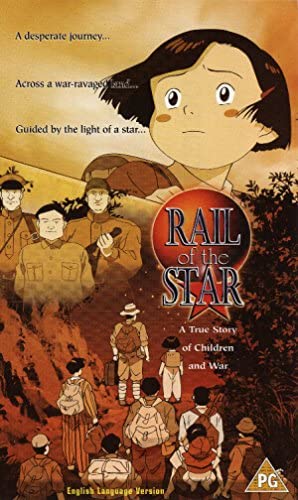 Plot: Chitose Kobayashi reflects back on her life as a child in Japanese-occupied Korea as the Pacific War and World War II begin.

Breakdown: The response for this movie doesn’t seem to be very positive. At best, I’d say it’s mixed.

Obviously, there are many people saying this movie feels like it’s trying very hard to be Grave of the Fireflies or at least play like a Studio Ghibli film, which I get. However, from the get-go, you know it won’t be the largely tragic story of Grave of the Fireflies mostly because Chitose is alive and well at the start, a successful actress even, and she starts the whole flashback by confirming that her family escaped. As opposed to Grave of the Fireflies, which also works on a flashback, but is told by the perspective of a homeless and clearly dying Seita.

Even the names seem in stark contrast. Rail of the Star sounds a lot more optimistic and positive than Grave of the Fireflies.

But is it really fair to make such comparisons when this is supposedly a true story? This is an autobiographical tale of a real woman named Chitose Kobayashi. How much has been changed for dramatic effect, I don’t know. However, can you really say a movie is aiming to be a rip-off or an homage if the story is, more or less, true?

I got invested in this movie just fine. I was never fooling myself into thinking this was a Ghibli film, but it’s still compelling and interesting enough to grasp your attention for an hour and fifteen minutes. Plus there were moments where I almost teared up a little.

The problem I have with this movie is that there are moments where it is a bit melodramatic and yet, at the same time, the movie doesn’t do enough to have heavy dramatic impact. For instance, the scene where Chiko (Chitose’s nickname as a child) sat on a pin that was stuck in her pants really seems over the top for the situation. I mean, I get that it probably hurt a lot, a given with her insane screaming (props to her VA), but it was really so bad that another hour or so without treatment and she would’ve died? Can someone with more medical knowledge tell me if this is legitimate? Is it an infection risk kind of thing?

None of the characters really stand out at all. Chiko is a very real child reacting to everything as most children would. I don’t even mind the scene where she blows up because the new backpack she got was a plain brown color instead of the red she wanted because it’s the very tip of the iceberg of effects from the war. I’m sure, looking back, Chitose probably thinks she was being very foolish getting upset over such a thing in comparison with everything else.

The mom is nice, but typical. The dad is nice and brave, but typical. Her aunt Yohko and grandparents are nice, but typical. Are you seeing a pattern here? Probably the second character to get any sort of real character development is her nanny/maid (?) Ohana, a Korean woman who is scrounging together funds for her mother’s medicine. She is pretty close to Chiko, and she has a father who….I guess doesn’t like her. The one time we see him, he throws out her money and shuts the door in her face. No idea why.

And, that’s pretty much it. They make a big thing out of Ohana being in the audience of Chitose’s play, the framing device of the movie, but there wasn’t a big enough connection made between the two for me to care that much.

Finally, there is Miko, Chiko’s little sister and the source of the most impacting scene of the movie. Which is a shame because, outside of the default ‘she’s a kid so it’s extra awful’ bit of sadness in her part of the story, she’s also very much a typical little girl. There aren’t really any major scenes that make you connect with her. The one scene they keep going back to is a short scene where she’s asking Chiko if she can play with the paper ball she’s playing with, but Chiko won’t let her. But she leaves the ball behind when she goes to play with her friends, so Miko is finally able to play with the ball.

The ball is a major artifact throughout the rest of the movie, but since there wasn’t enough emotional connection made, it’s hard to feel that pang in your heart when it keeps reappearing.

Finally, our title namesake, the rail of the star…..also isn’t dramatic or impacting enough. One night, Chiko’s dad taught her that the North Star always points north and is well-known for helping travelers along their way. The scene in which this is taking place isn’t particularly sweet or emotionally impacting. It’s a fine scene, but it’s not terribly memorable.

When they’re escaping, she remembers what he taught her as they realize they’re lost and they follow a ‘rail of the star’ to get to the 38th parallel and get back to Japan. She also asks the stars to be brighter when she’s too scared to cross a railroad bridge in the dark. That’s about it.

They do a good job at keeping the movie grounded and even bringing some of the other elements of the war to light that most other movies like this don’t, like the plight of the Koreans who basically traded one invader for another.

The art and animation for this movie are dated and not the best, but I am still a sucker for classic-styled art and animation. Not saying much, though, because this movie isn’t terribly old coming out in ‘93. I’m older than this movie. Surprising, really, since the studio behind this is Madhouse.

The music is fine and does the job well, but some of the tracks seem to repeat too much. I’m not sure if the tracks are too similar or if they’re really playing the same song over and over, I couldn’t tell.

The voice acting, Japanese version, is really good. And serious props to Chiko’s VA for that screaming. That was some soul breaking screaming.

Bottom Line: It’s a fine wartime drama, but it has a lot of problems utilizing dramatic moments and there’s not much that is horribly memorable about it. There are several parallels to Grave of the Fireflies, which might be unfortunate because I really think the movie stands fine on its own and it is supposedly a mostly true story. It’s not like it’s a huge ‘point out the rip-off moments’ movie, but it’s hard not to make comparisons.

Give it a shot if you like the genre. It does give you a few heart pangs, but don’t expect it to be an uncovered classic.

Additional Information and Notes: Rail of the Star was directed by Toshio Hirata, who also directed Petshop of Horrors and it was produced by Madhouse. It is currently licensed in the US by ADV films.

Recommended Audience: The genre itself is more geared towards an older audience. Other than that, some people do die, but no one dies on screen. There’s no blood, swearing, nudity, sex etc. Really, the most they do is shove a big pin into Chiko’s rear end and there’s not even any blood in that scene either. E for everyone, preferably with a parent present, though.