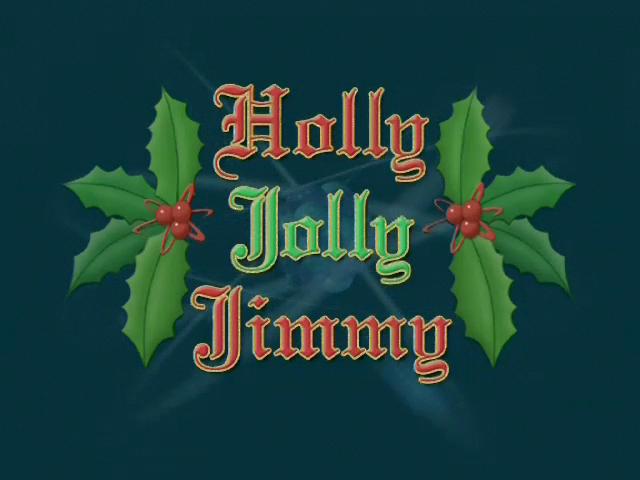 Plot: Jimmy, being a man of science, refutes the existence of Santa Claus. In order to prove once and for all that he doesn’t exist, he travels to the North Pole.

Breakdown: I’m a bit surprised that in all my years of reviewing I haven’t once reviewed anything Jimmy Neutron related. While I only saw the movie on which the TV series was based only a few times, I followed the show quite closely. It wasn’t one of my absolute favorite shows, but I enjoyed it and I watched it all the time. While the premise wasn’t all that unique, the sense of humor was good, the characters were memorable and it definitely had a unique and memorable art style, even if it did take some getting used to. I always wanted a toy of Goddard, and I’m sad I never got one. He’s one of the best robot pups.

Jimmy Neutron was such a popular property for Nickelodeon that they did three crossover specials with Fairy Odd Parents, and the show got a spin-off, kinda, with Planet Sheen. I say “kinda” because really the only link the show had with Jimmy Neutron was having Sheen as the main character. There was a Carl-like character, but it wasn’t him, and neither Jimmy nor any of the other characters from the show ever made an appearance….and it’s one of the most widely hated cartoons of the time.

As for this Christmas special, I just barely remember it in tiny bits and pieces. It’s not the most memorable holiday special in the world to say the least. As I was watching, I slowly started remembering more, but most of it isn’t really worth remembering. There are pretty of good jokes here, it got a few chuckles out of me, but for the most part it’s very much forgettable. If I hadn’t probably watched it numerous times as a kid around the holidays just because it was on, then I probably would never remember it.

There’s nothing really wrong with it, there’s just not much to help it stand out. It also makes some weird decisions. For instance, this is….kinda a musical? There are two songs in this special (technically three, but the third is a reprise of the first.) which isn’t a bad or confusing decision, but they seriously didn’t seem like they wanted songs in this. The first song is very lackluster and took me off guard because I never remembered any musical numbers in Jimmy Neutron. I basically forgot the song as soon as it ended. Then there was Jimmy’s dad’s song about Pule, which is the holiday he made up to replace the seemingly ruined Christmas. It’s a mixture of ‘pie’ and ‘yule.’ The song is basically just “Have Yourself a Merry Little Christmas” just replace “Christmas” with “Pule.”

Speaking of Pule, that part was just dumb. I get that Hugh is an idiot, I get that he loves pie, and I get that he had the best intentions, but that B-plot just wasn’t funny nor was the song that accompanied it.

In regards to the A-Plot, it’s the ol’ ‘Character wants to prove Santa doesn’t exist and accidentally screws everything up in the process and ruins Christmas’ plot. Not the most common plot, but simple and common enough to predict what will happen, more or less. My problem with it really is that it doesn’t make ANY sense.

Jimmy’s trying to disprove the existence of Santa because he doesn’t believe there’s any possible way for Santa to do the things everyone claims he does. Fine. He goes to the North Pole to investigate, finds Santa’s workshop and still doesn’t believe anything he’s seeing. He writes off the factory as if it’s just a normal factory, and he dismisses the elves as short people with an ear condition. He accidentally zaps Santa, who is in a different room, with his scanner, rendering him unable to go out and deliver presents. This gives Jimmy a great idea to prove Santa doesn’t exist.

He will use his technology to deliver all of the presents in twelve hours. And if he’s successful, it will prove that Santa doesn’t exist……

I really feel like I need to repeat that.

Jimmy doesn’t believe Santa exists because he thinks what he does is physically impossible. So if Jimmy can manage to do it, that proves that Santa doesn’t exist…….???

Santa is able to later recover and save Jimmy, Sheen and Carl after they nearly die while failing in trying to deliver all the presents. Turns out, Santa’s basically Jimmy. He says his catchphrases, he’s a science genius, and he even does a Brain Blast. Santa utilizes a mixture of magic and science to do what he does. With the help of some of Jimmy’s tech, he’s able to deliver the last of the presents and return the three back home.

Jimmy now realizes that Santa truly does exist, and he even got a special present. The reason he actually stopped believing in Santa was because, like so many characters who stop believing in Santa, he didn’t get what he wanted one year. He asked for a core from a dwarf star when he was little, but he never got it. When Jimmy returned home from his Santa trip, he found the star core under the tree with a note apologizing for taking so long to get it to him, but Santa needed to wait five years for it to cool enough to give it to him. Why didn’t you just leave a note for him five years ago saying he got the star but it wasn’t safe to give to him until it cooled?

Again, seriously, this special wasn’t bad at all. It just doesn’t seem like much effort went into making it stand out or make sense. It really feels like another episode of the show instead of being a special. If you enjoyed Jimmy Neutron, then you’ll likely enjoy this special, but as a Christmas special on its own, it’s just not very special.

If my work makes you feel jolly and you’d like to send some Christmas cheer my way, please consider leaving a gift under my Ko-Fi tree. Every donation goes to helping me pay my bills and keeping this blog running like Santa’s Workshop. Thank you! Merry Christmas, Happy Holidays and have a Wonderful New Year! 🎄☃️