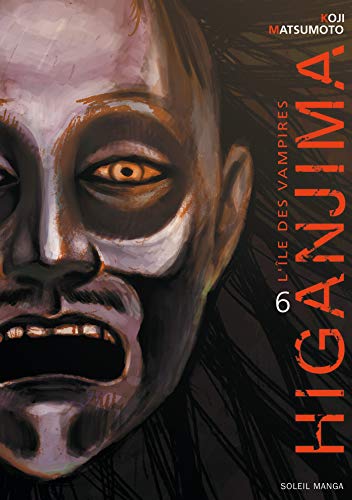 Plot: Atsushi seemingly gains the upperhand on Miyabi, and things are looking up as the others regroup and find the boat. However, escaping the island is nowhere near that easy. Even in the waters surrounding Higanjima, there are hazards that are life-threatening….and impassable.

The group is forced to bail and head back to the island. Separated yet again, Akira beats himself up for not being strong enough to protect his friends, defeat the threat and help get them back home. Upon hearing Akira’s deep desires to be strong, Atsushi leads him to the camp of a small resistance group he joined when the invasion first happened so he can be trained by his master.

Breakdown: I’d say this is the best volume yet. The first half is intense. The battle between Miyabi and Atsushi reaches a head (pun intended, but nonsensical unless you read the volume…) showing off what a complete and utter badass Atsushi continues to be. It actually has a Miyabi death fakeout in it, but the death was so vicious you’d never think he’d be able to recover, even as a vampire, but nope. His methods of regenerating were…..odd, to say the least.

Atsushi’s even still a massive badass when he meets back up with the group after that battle – he’s so awesome.

Like the faceoff with Miyabi, even with everything they went through, you know escaping the island won’t be as easy as grabbing a boat and running away. And the road block is definitely not something cheap or benign just to keep them there. Miyabi has the entire island under his thumb, and that includes the waters surrounding it.

Katou is practically going through a ‘gonna die soon’ checklist. He’s turned into the biggest coward of the group (Pon has yet to return, wherever he is) ready to run off without his friends when the going got rough. Then when they have a moment of peace seemingly about to leave the island, he reveals he has an engagement ring and is planning to propose to his girlfriend, Megumi, soon so he wants to do everything in his power to live.

Dude, we already did the ‘teens who are so in love they’re going to get married soon, but, horror being horror, they die before then.’ thing.

Akira is also consistently stepping up his badassery, but finds he can’t do nearly as much as he needs to in order to protect his friends and bring them home. Atsushi shares the knowledge that he’s not the only human being left on Higanjima. At the start of the vampire infestation, a rather large group of resistance fighters joined together, but now their group is rather small since they kept getting raided by vampires.

One of the last remaining survivors happens to be the man who trained Atsushi, who will take on the task of training Akira. However, there’s something odd about him. He is a massive goliath of a person who is first seen chained to a wall with a creepy mask on his face in a cavern underneath the resistance camp. Since he is only barely introduced in this volume, we don’t really learn anything about him, but his mere presence makes me very intrigued to see what the next volume has in store.

If there’s one thing that’s kinda getting on my nerves, though, it’s that so many of these characters keep getting crushed to the point of coughing up blood, which would obviously indicate a terrible internal injury, yet not only are their lives not threatened by this injury, they’re up and walking without issue and heal from the damage a short while later. I wouldn’t have felt the need to mention it if it was just once, maybe Matsumoto didn’t think about the continuity at that moment, but to happen several times is a bit much.

Overall, really great volume and I can’t wait to read the next one.