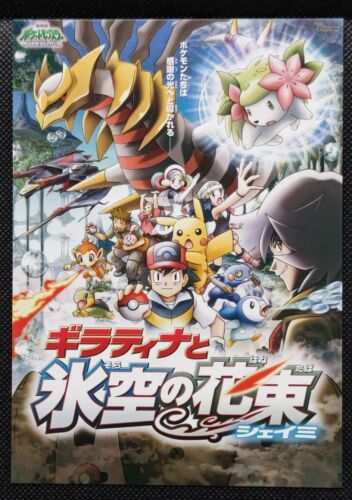 Plot: Dialga and Palkia may have reversed most of their damage from when they fought before, but residual effects are still being felt. In the Reverse World, a topsy-turvy version of our world, toxic clouds have begun to appear in response to the disturbances in space and time caused by Dialga and Palkia.

To get its revenge, the ruler of the Reverse World, Giratina, attacks Dialga and drags it and an unsuspecting Shaymin through to the Reverse World. Using Seed Flare, Shaymin makes another portal and escapes to the real world where it finds itself in the care of Satoshi, Hikari and Takeshi. While its attitude is certainly abrasive, they agree to take it to the flower garden so it can partake in the annual Flower Bearing.

However, Giratina is following closeby, and so is Zero – a man who wants to capture Giratina for malicious purposes.

Breakdown: This is another one that doesn’t seem to have a whole lot in regards to changes, so I’ll be going in 20 minute chunks.

I would say that Shaymin’s voice in the original is less annoying than the dub…..but then I’d be lying.

Forgive me if I’m wrong, but I do believe this is the first time that the dub’s title animation is the exact same as the original’s. The only, obvious, difference is that the text is changed to their English counterparts and the Japanese credits are removed.

What exactly was Satoshi doing to get his hands that dirty? And doesn’t he normally wear gloves?

I’m just realizing how much personality Pochama has. I mean, it’s mostly a kooky klutz, but it’s still cute.

Jibacoil literally sounds like someone doing that flappy thing with your lips. Bbbbbbbbb

Wait, all of the ‘coil line basically sound like that?…..Why?

Hikari’s still getting on my nerves coddling the little brat.

It’s kinda weird to hear that woman ask Hikari if she can hold Shaymin. For most other Pokemon, this would be understandable, but Shaymin can talk. It’s like someone asking a mother if they can hold their three year old child. The kid can answer for themselves.

Yup, Shaymin’s voice doesn’t change at all when it switches to sky form. *shrug*

They’re breaking a lot of windows on that train. Who’s paying for those damages?

Just to be fair to the dub, Satoshi and Hikari both point out the obvious in the scene where Brock’s explaining the glacier.

I’m just now realizing that it makes even less sense for Satoshi to suddenly become sad when he realizes Shaymin will be leaving them once they reach the garden considering that’s literally only a couple shots beyond Shaymin yanking on Satoshi’s ear to get him to fly then telling him he’s too heavy.

Shaymin says the reason it always rides on Ash when they’re running away from Giratina is so he’ll get eaten with him….Yes, such a likable Pokemon.

I love how, throughout this whole action scene, Takeshi is relegated to being nothing but reaction-shot-man. They could’ve designed the glider to be big enough to hold one more person. Stop giving Takeshi nothing to do in these movies.

Holy crap, Regigigas sounds so terrible in the original. Sounds like a crazy person on a rampage.

This is a weird thing to note, but Satoshi’s lips don’t match his words at all when goes ‘YAHOO!!’ Also, he sounds really strange saying that line. It’s just a strange moment, really.

The CGI for the flowers still looks ech.

My experience with Japanese Team Rocket isn’t vast, but even just watching 11 movies with them I can say I’m pretty sick of hearing them say “This feels bad.” They say it nearly every time they’re on screen. Granted, “Looks like Team Rocket’s blasting off again” gets old too, but for some reason “This feels bad” gets old faster.

The ending song, ‘You Are the One,’ is pretty good. It’s pretty much a tossup as to whether I like this or the dub’s ending theme better.

All in all, the dub holds up very well. Really nothing was changed outside of the obvious things like the title screen and the credits song, and any changes that did occur didn’t alter my opinion on the movie at all. Shaymin’s still annoying, Zero’s still an idiot, and I still didn’t really have fun. Again, there’s nothing terribly wrong with it, but there’s nothing really special about it either.

Recommended Audience: Same as the dub, except they actually say ‘die’ once or twice. So jack it up about ten or twenty years.