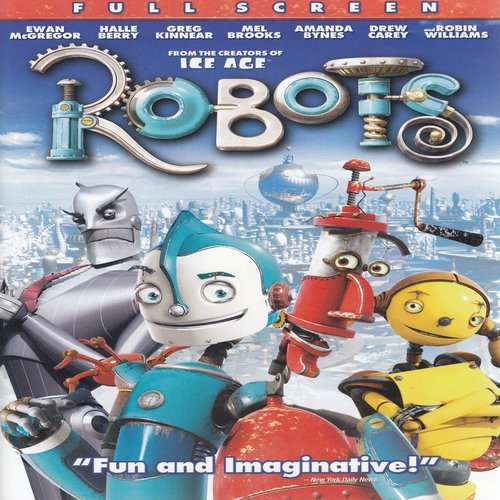 Plot: Young Rodney is a robot who always aspired to be a famous inventor like his idol, Mr. Bigweld, who is viewed as one of the best bots in the world. When he moves out to the big city to show Mr. Bigweld his inventions and try to work for him, he finds that Mr. Bigweld is gone. In his place is a tyrannical robot named Ratchet who is using his business to force all robots into upgrading instead of repairing or replacing. Thousands of bots who can’t afford to upgrade are being labeled as “outmodes” and being sent to the scrapyard. Rodney has to find Mr. Bigweld and stop Ratchet before it’s too late.

Breakdown: Being honest, I wasn’t expecting too much going into this – and I say that as someone who sincerely loves robots. I haven’t heard a whole lot about this movie before now, and the only time I remember people talking about it was when people on Twitter started circulating that one joke about how “Making the baby is the fun part.”

However, I was pleasantly surprised. I very much enjoyed this movie all the way through. It’s not a masterpiece or anything, but it’s very fun, cool, funny and even a little emotional.

The animation is pretty good. I think it’s pretty cool how each robot has a fairly unique manner of moving depending on how they’re designed. The art is also stylized quite well and is fun to look at. The characters all mostly stand out from each other, are colorful and have little quirks that either add to their comedic factor or make them more useful. I also appreciate how well the sound design worked with the robots for the most part.

I also think the way the robots “age” is interesting. They get various replacement parts each year and, I guess, undergo some mild rebuilding every year to show their aging process. 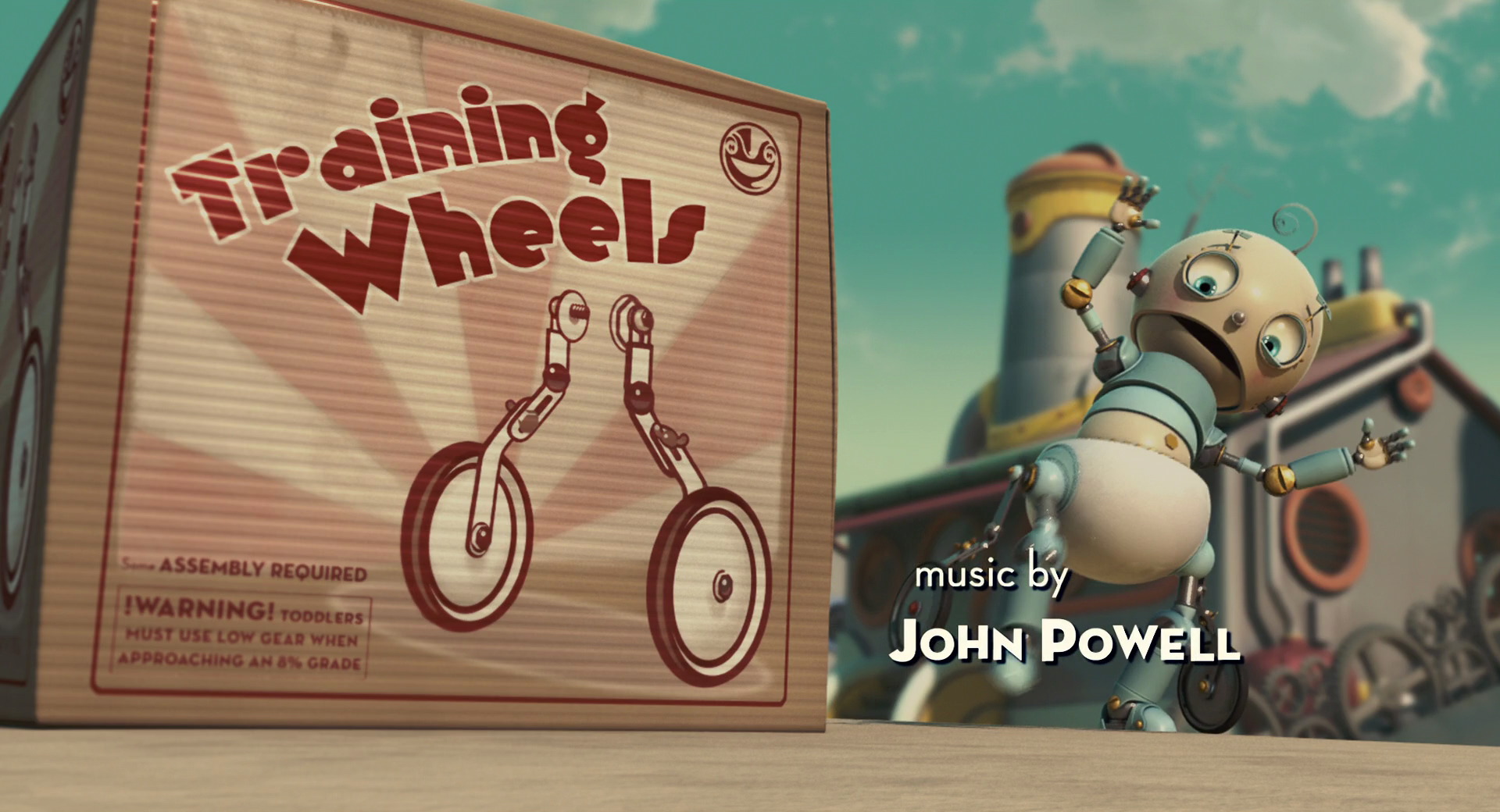 The music was a mixed bag. The orchestral score works pretty well. It was nothing too unique or memorable, but it did keep me engaged and felt very fitting to each scene. My issue comes with the pop music. Taking a note from Dreamworks, I suppose, Blue Sky included some pop songs along with some more fitting but also kinda distracting older pop songs. There was one song in the middle where I really don’t think it is a pop song, because it sounds like a song written for the movie, but that would be the only time the movie would have a legit musical number, despite no characters singing. It’s very weird.

The absolute worst moment of this soundtrack being distracting was when Fender, a bot voiced by Robin Williams, so he’s basically just Robin Williams as a robot, fights off a bunch of robots by suddenly breaking out into “Hit Me Baby One More Time”….The joke is that he’s wearing a female lower half so he….sang a girl song? Also, the song was seven years old by this point, so it’s not even relevant. Definitely the worst moment in the movie.

And, of course, there was a dance party at the end because animated movie in the 00s.

The story was very cliché, but was strong enough to hold my attention. Also, they did throw me for one loop. When they introduced Mr. Bigweld, I thought for sure he’d be the villain. Rodney hero-worshiped him, he was a fat rich guy who seemed like he loved everyone and everyone loved him, he had statues made of him and everything. But nope. Mr. Bigweld was a good guy just overtaken by an evil guy who was a pawn for an evil woman.

Big corporation bad turned big corporation good as long as the people running it are good. Which, yeah, in an ideal world. That’s nice to think about.

Speaking of big corporation bad, dear god, the body count of this movie. I can only imagine how many “outmodes” got sent to the scrapyard IE murdered because they couldn’t afford the upgrades. It’s actually kinda disturbing how many parallels you can make to our world if you imagine all the characters as people….

There are no subplots in the movie, it’s right on one track and we keep going until the end. If I had any real complaints about the story it’s that I really wish Rodney had spent more time struggling and living with the other downtrodden robots, because, as far as I see, he arrived in this city, realized the problems involving an incredibly huge and influential corporation and fixed the issue entirely in like three days.

I didn’t much care for the romantic…..anything in this movie. Fender getting a love interest, I’m cool with. However, Rodney has two love interests in this movie, Piper, who is Fender’s little sister, and Cappy, who is an employee of Bigweld Industries. He has more screen time with Piper, but it’s like she’s not considered an actual romantic interest because she’s too young, but Rodney is only supposed to be like 18 or 19 while Piper is like 16 or 17 at least. 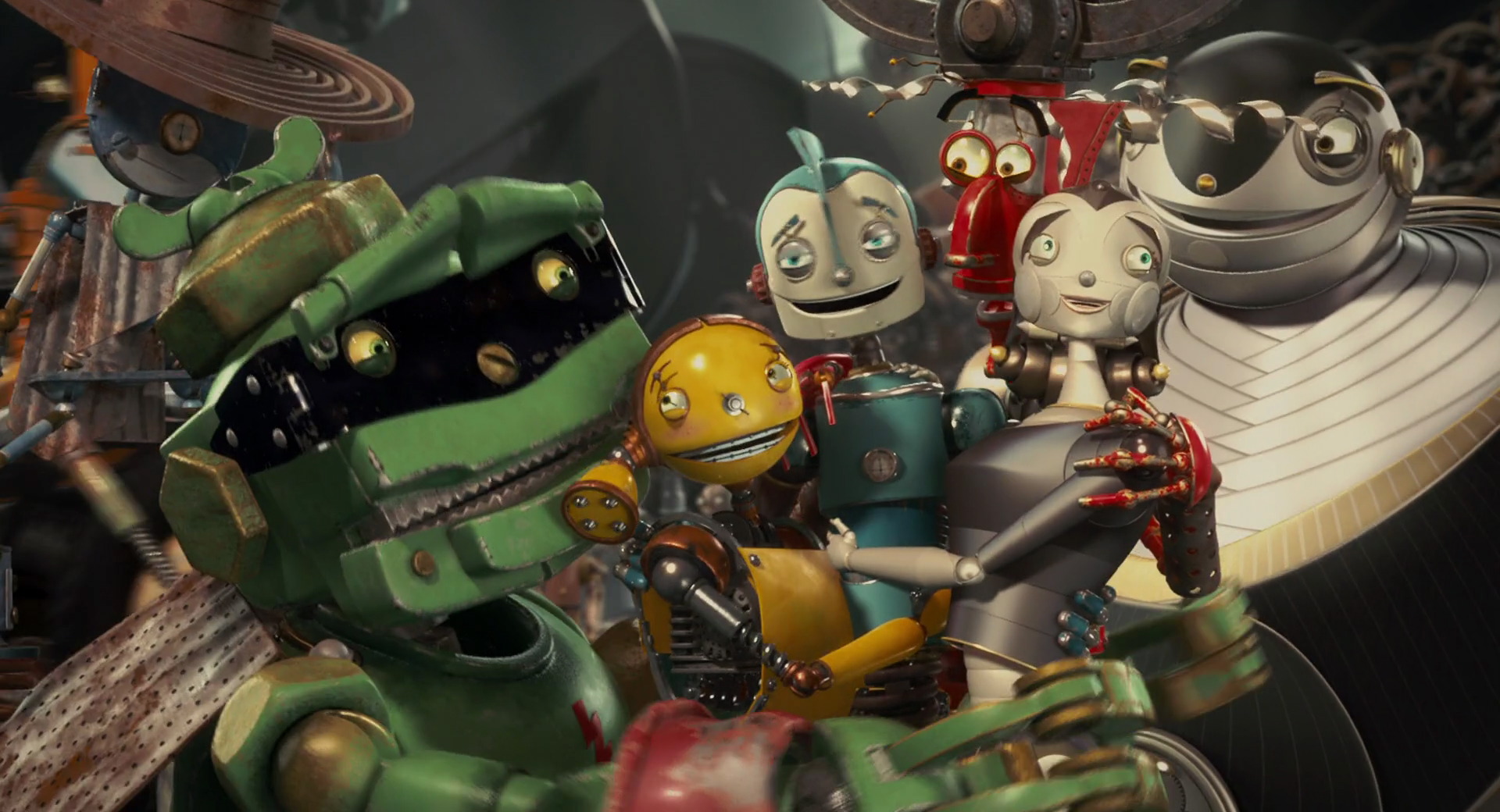 Cappy, whose age I’d imagine is in her late 20s or so, considering she’s a high-ranked employee at Bigweld Industries, is definitely framed as the main love interest, but they barely spend any time together, and the time they do spend together is usually with a lot of other people. They don’t get any moments together, alone or otherwise, they just get a few knowing glances between them. Cappy doesn’t even have a personality. She’s just a nice lady who works at Bigweld and constantly gets sexually harassed by Ratchet because that trope has to stay alive I guess.

And, yes, even in robot world, we can’t escape women being sexually harassed.

Speaking of women, I get that this movie was made in 2005, but some of the humor around women was a little uncomfortable. Like when Rodney gets a new torso for his senior year, he has to use a hand-me-down from his cousin….who is a girl. So he has a pink torso with a boob curve to it.

Rodney finds a new lower half in a panic after losing his in the scrap yard, and it’s a woman’s. So he goes “This is so wrong!”

When they meet Ratchet’s eviler mom, Fender calls her a “sir” and she points out that she’s a woman, so Fender says “Ouch!” and one of the other robots has his lightbulb eyes burst. Some of the humor hasn’t aged well, is all. 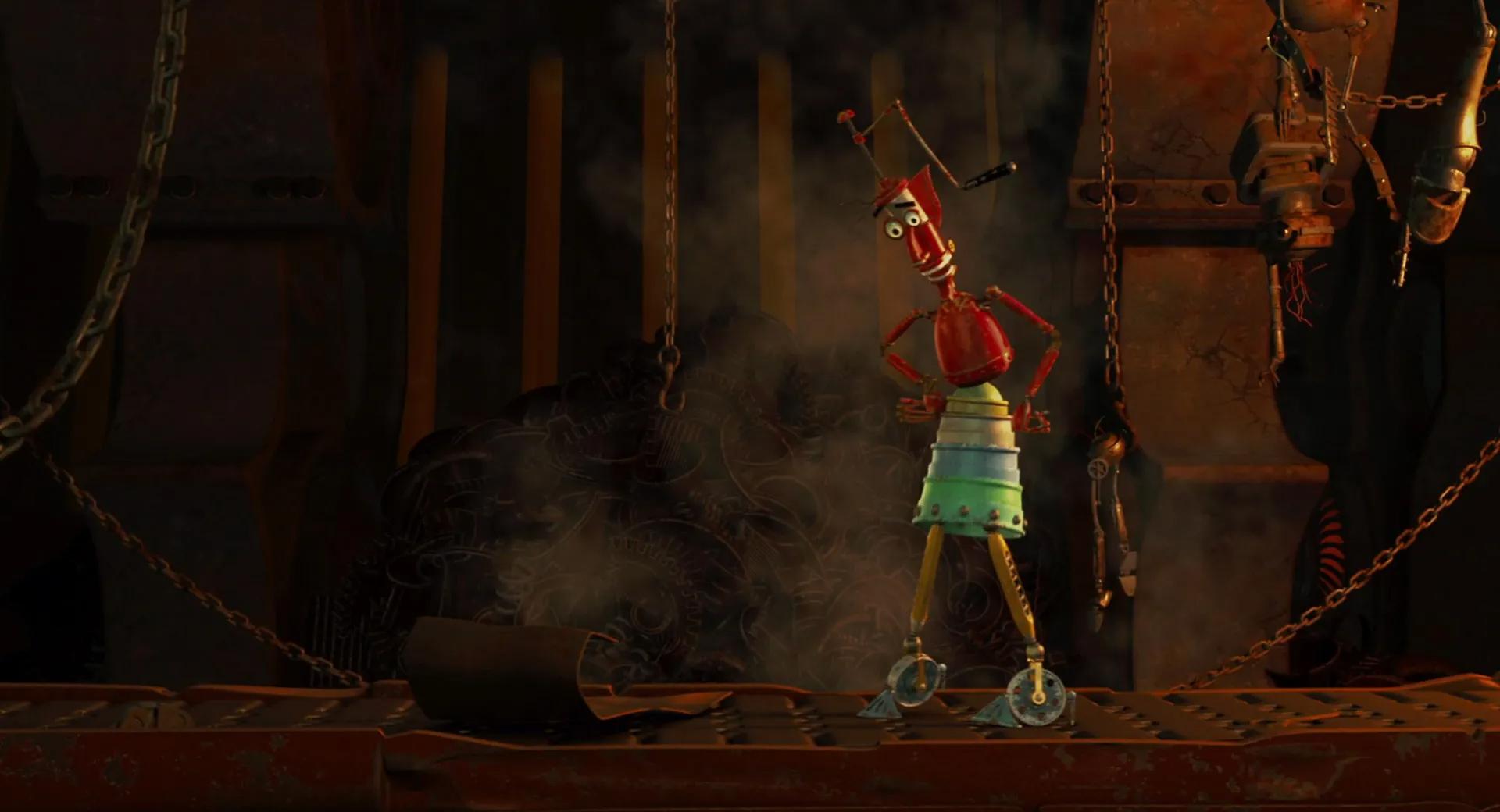 I don’t think this movie is sexist, for the most part, as the women do get a decent degree of things to do, including fighting, but there’s the whole ‘Cappy has no personality’ thing, and the fact that nearly all of the women in this movie just act as love interests.

I also didn’t think Ratchet needed an even more evil mother running the scrapyard to basically be his puppeteer. Ratchet is evil enough on his own. Although, this did make for a few good jokes, so it doesn’t bother me too much.

The comedy was pretty good. I was laughing fairly consistently. Not busting a gut or anything, but quite a surprising amount of chuckles. They’re probably cheating a little bit because I’m a sucker for puns and there are just so many robot puns and visual gags in this movie.

The action was also alright. I think the first action scene where Rodney and Fender are being flung all around town on that transport ball went on just a little too long, though.

The emotional moments hit a little more than I expected them to. I wasn’t choking up, but it did manage to connect with me several times. I think it was a really good idea to start this movie with Rodney’s dad super excited about being a dad and watching Rodney grow up for a bit before getting into the main story. It didn’t drag, and it made me feel a lot more for him and his parents than if we just started with him as an adult.

The characters all work well enough. I like Rodney and his parents quite a bit, Piper can be kinda cool, Mr. Bigweld was pretty funny and cool, and Fender has his moments. Sometimes he can really be too much, though. Even Genie knew when to tone it down, but Fender just never stops. I also never once felt like he and Piper were siblings.

Overall, Robots was an enjoyable experience that I had quite a bit of fun with. You’re not going to get much in the way of anything deep or new with it, but I do think you’ll be pretty entertained by it most of the time. I’d gladly watch it again in the future.

Recommended Audience: There are a few iffy jokes in there, but they never go too far. There’s the “making the baby” joke and they make a penis joke when Rodney is finished because they forgot to attach it………….I know you’re probably wondering a lot about how sex and sexes/genders in robots works in this world…..well, me too. And I wish I wasn’t. I guess you can also say there’s some scary imagery what with the robots being destroyed and picked apart. There was one moment where they officially announced that replacement parts were being discontinued. The robots were panicking because they thought they’d wind up dying if they couldn’t pay for upgrades. A robot fell apart in front of them and the vultures just started grabbing any parts of him they could. It’s hilarious, but also really messed up when you remember these are sentient beings. I guess 7+.