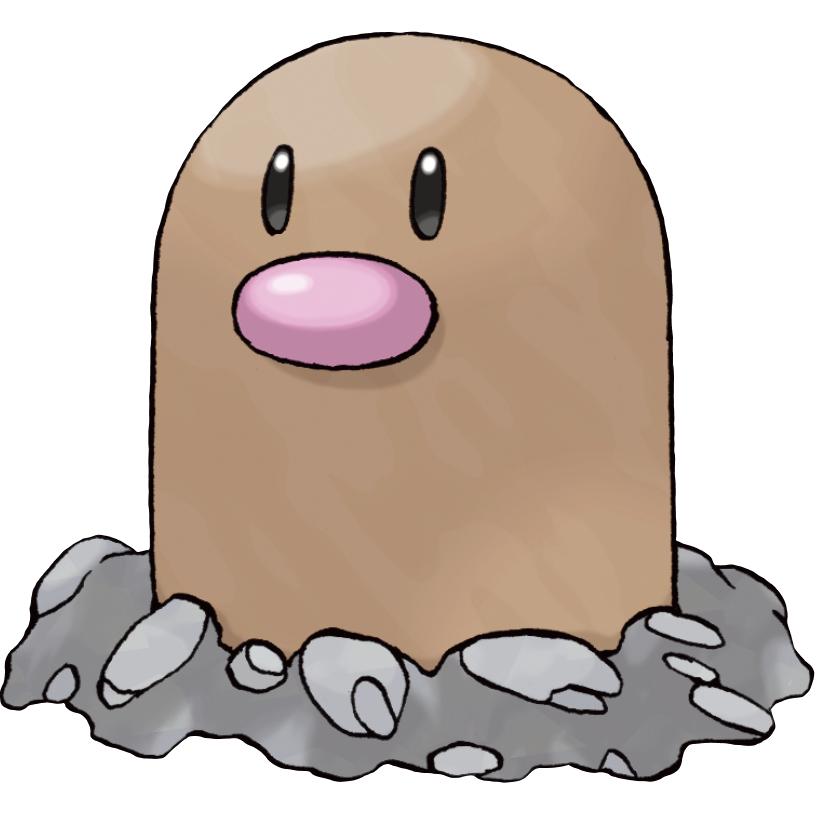 Name: Diglett is an adorable name. It’s easy to remember, cute and fitting. It’s fairly self-explanatory. Its Japanese is name Digda, which is as cute if not cuter than Diglett. Digda just seems to be based only on the word ‘dig.’

Fun Fact: In France, it’s known as Taupiqueur, which is derived from ‘taupe’ for ‘mole’ and ‘marteau-piqueer’ for jackhammer, which is pretty cool.

Design: Despite Diglett being an absolute cutie, its design is still almost ridiculously simplistic. It’s literally just four pill shapes. Pill-shaped body, pill-shaped nose…mouth…thing, and two pill-shaped eyes. It definitely works, I won’t lie, but they really didn’t pull out the creativity with the thing outside of never showing its bottom half. 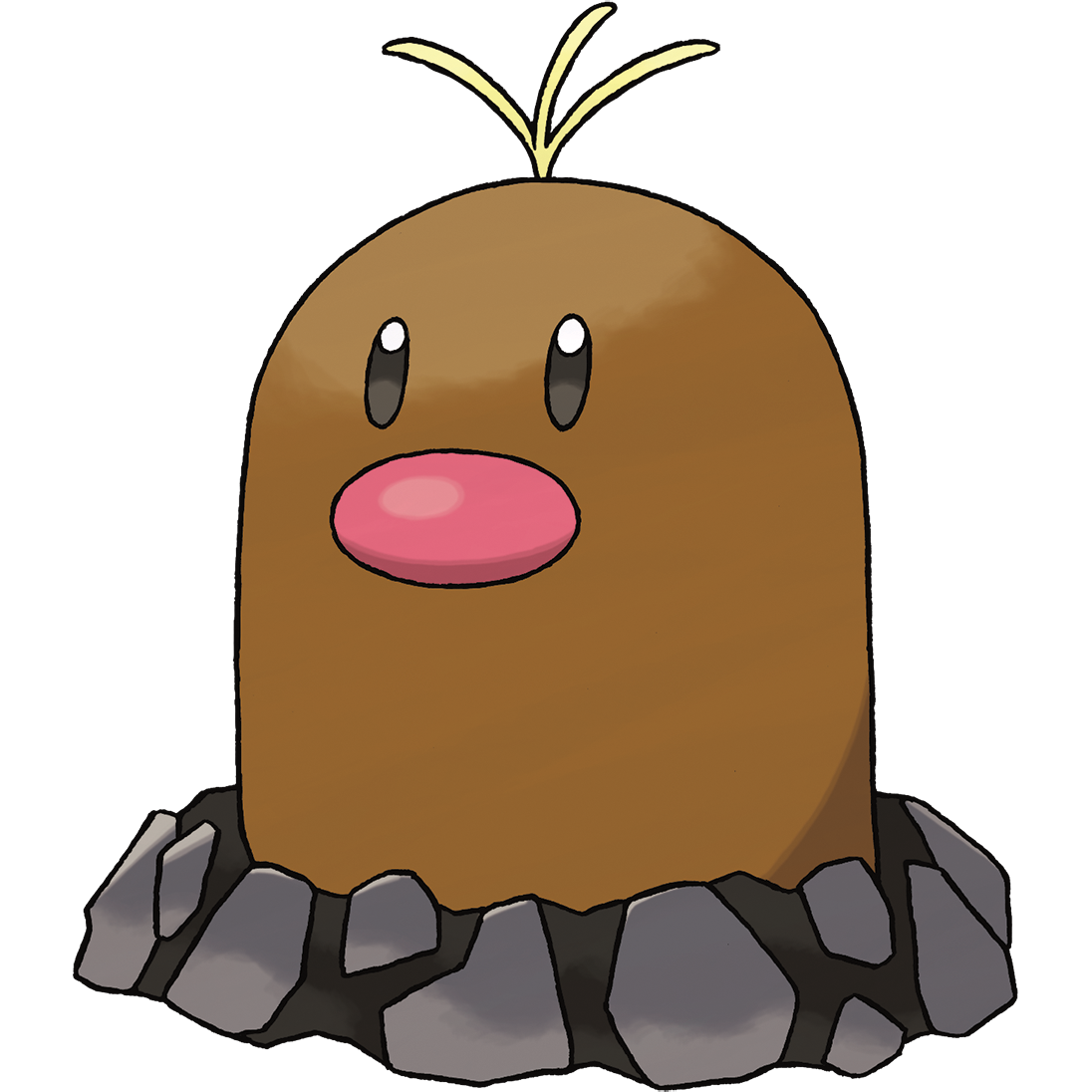 I feel like whoever made Alolan Diglett was a troll. Like, ‘What if we made Diglett a little darker and gave it three little hairs that are somehow made of metal and called it a new version of the Pokemon?’ Despite there not being much difference between the two, I don’t actually care much for Alolan Diglett. Something about those little hairs makes it somehow lose cuteness points with me.

Sprite-wise, Gen I looks normal until Green where it looks more like a baby Diglett, which is pretty cute.

Nothing much worth mentioning after that.

A simplistic Pokemon comes with a simplistic shiny. All that’s changed about shiny Diglett is that the brown color is SLIGHTLY darker and the nose mouth thing is blue. While I usually love blue shinies, and there’s really nothing wrong with this shiny, I can’t stop thinking that this looks like a Diglett that’s suffocating. 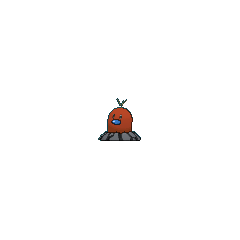 Alright, they also gnaw on roots underground, destroying the crops of many farmers. Ironically, many Diglett are domesticated and are trained to work on farms since they quickly and effectively till soil. Farmers will plant trees that Diglett enjoy most around their crops so they’ll till the land when they move back and forth between them. Also, their droppings make good fertilizer….yay.

Wait, they can see their droppings, yet we’ve never seen a Diglett’s lower half?

No one knows exactly how big a Diglett is, and the size listed in the Pokedex is based purely on how much of its body peeks out of the ground.

Here’s something I found very interesting – Diglett’s skin is thin and weak. It can’t be exposed to light otherwise its blood will heat up and weaken it. In Clefairy and the Moon Stone, I criticized the fact that they said the lights being put up throughout the caves in Mt. Moon were having a negative impact on the Ground Pokemon. They stated that the heat from the lights was causing the Ground Pokemon to dry up, weakening them, which didn’t make much sense to me because Ground Pokemon thrive on dry environments and hate water. Well, I guess at least for Diglett, I have a reasonable answer.

Kinda weird that Diglett have thin skin, though, considering that you’d think it’d need tough skin to dig around in the dirt and rocks all day. However, I do have to note that, in the anime, Diglett show up a lot in the sunlight.

Alolan Diglett is stronger than regular Diglett because they dig through volcanic rock. The high iron content of the soil gave them three metallic ‘whiskers’ on their head through which they can communicate and sense their surroundings above ground.

In terms of design, Diglett is based less on real moles and more on the moles seen in Whac-A-Mole games.

Alolan Diglett’s whiskers are based on Pele’s hair, which are strands of volcanic glass found in Hawaii. It’s not metallic, it’s more pure rock closer to granite, but it does appear to be yellow or golden, mimicking the color of blond hair. The black dirt around the Alolan Diglett is likely in reference to black sand found near volcanoes and/or black magnetic sand since it’s also adopted Steel-typing in this form. That’s actually pretty neat, but considering the dirt isn’t REALLY a part of the Pokemon, it’s hard to say that I can give it anymore points for that. 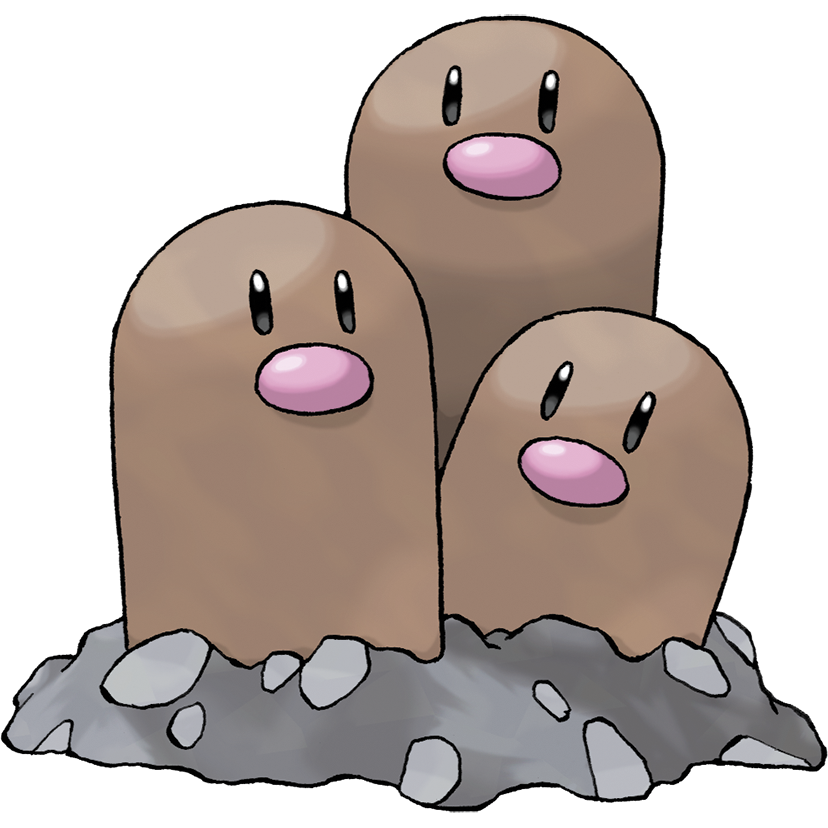 Name: Dugtrio’s name is extremely fitting. It’s slightly more intimidating than Diglett and reflects its…..three-ness very well. It has the same name in both English and Japanese.

Design: Ladies and gentlemen, welcome to the first of several Pokemon evolutions where the brilliant idea was “Let’s take three of (x) and smush them together to make a new Pokemon!” I don’t hate Dugtrio, I just think the design is lazy, much like with Magneton and Dodrio. The most they do to differentiate it is give it an angry expression, but only like half the time. 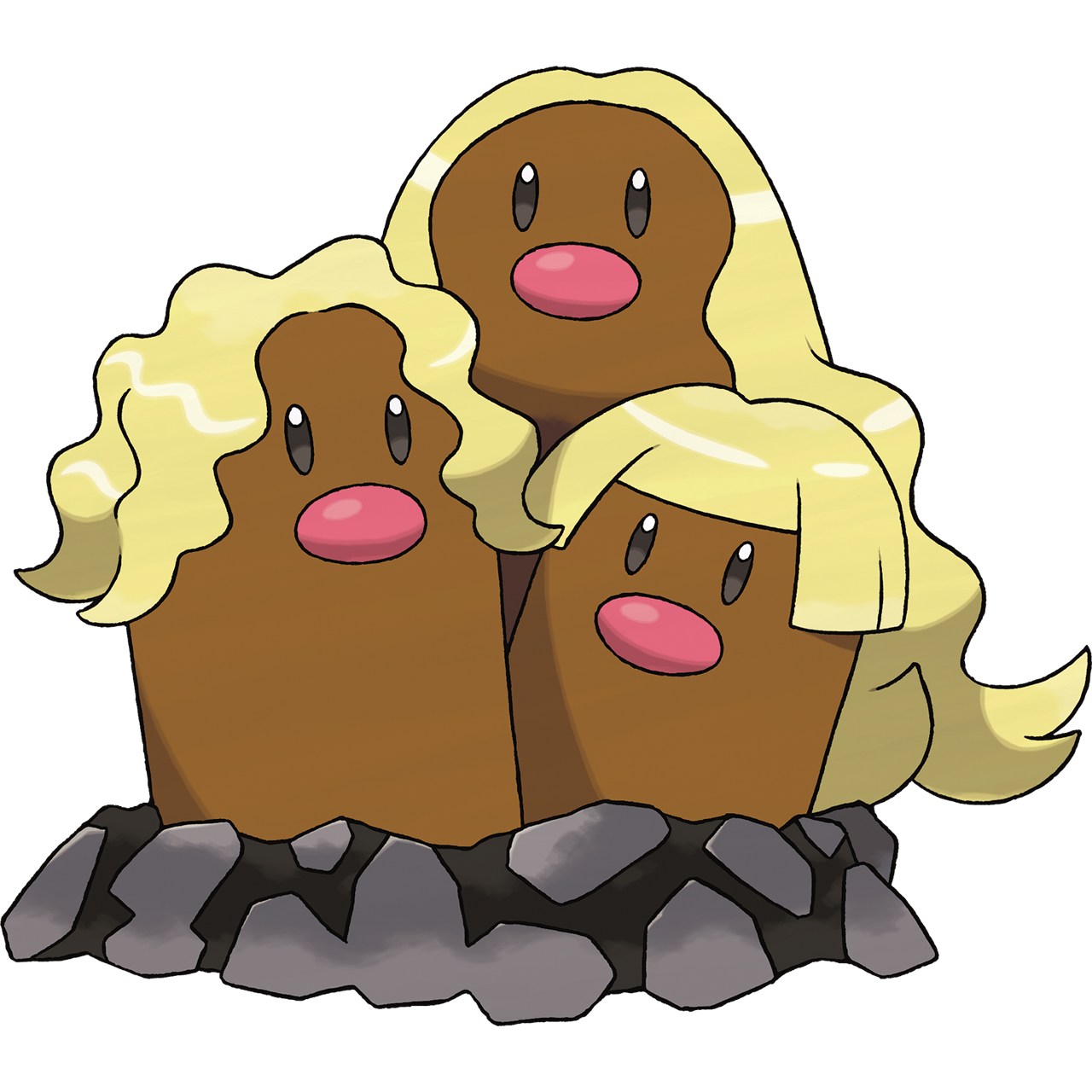 If someone was kinda trolling when they made Alolan Diglett, someone was top tier trolling when they made Alolan Dugtrio. When this image was first released, I laughed out loud for several minutes. This is just a Dugtrio in three stupid blond wigs. They look ridiculous. They look like they fused with Hanson. I don’t care if there’s lore here – at the end of the day, they have one of the stupidest most goofy designs I’ve ever seen in Pokemon.

Sprite-Wise, there’s not much to say. Crystal’s animation is pretty cute, but that’s about it.

Same as Diglett. Just a little darker and blue nose mouth thing. I think the shade of blue for Dugtrio might be just slightly deeper, but that’s about it. 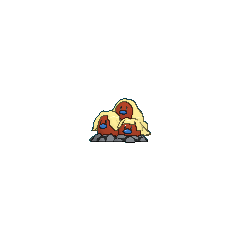 Shiny Alolan Dugtrio is the same way, but looks worse than shiny Alolan Diglett purely due to the fucking stupid hair. Because the brown color is darker, the contrast with the blond hair is much more apparent, making it somehow look even worse than it originally did. Please save me from this bleached blond hell.

Dex Entries and Backstory: Why didn’t Ash’s Pokedex have any information on Dugtrio in episode 31? It’s not a mysterious Pokemon by any means besides the no lower half thing. Hm.

Dugtrio is either three Diglett fused together for some reason and somehow or a single Diglett split off into three heads. They all think the same thoughts and act together, which is the polar opposite of Dodrio, interestingly. Although, one section said the heads will sometimes fight each other food.

It can move underground at speeds upwards of 60 MPH and can create earthquakes, and that’s about it besides stuff it retained from its Diglett form.

Alolan Dugtrio is regarded as a deity, and no I’m not kidding. Remember how I said that Alolan Diglett’s whiskers were based on Pele’s Hair? The name Pele comes from the Hawaiian goddess of volcanoes, Pele. She created the islands of Hawaii, and she’s a very popular and respected Hawaiian deity. Alolan Dugtrio didn’t just use Pele’s hair in its design and conception – it also used Pele herself as inspiration.

In addition to being viewed as a deity, Alolan Dugtrio is also specifically said to be feminine deities of Alola incarnate, and there’s also a curse associated with Alolan Dugtrio – keeping any of its fallen hairs will bring the person bad luck. This is based on Pele’s curse where any visitor will be cursed if they take and keep anything from her island.

Pokemon, Game Freak, Nintendo, what are you doing? I’m not Hawaiian nor can I speak for any Hawaiians, so I won’t attest to how offended they might be, if at all, but I don’t think there’s any denying that this is overall insulting. You set an entire region in a place that is akin to Hawaii, use one of their most beloved (and fairly feared) deities for a Pokemon design, and you squeeze out that janky blond turd.

Can you imagine anyone worshiping an Alolan Dugtrio? How ridiculous that would look? There are some pretty weird religious practices in Pokemon, but I would be embarrassed watching anyone praying to a Dugtrio with a perm.

What’s even more embarrassing is that the design is also based off of the look of many typical surfer dudes, particularly the SoCal surfers that likely frequent Hawaii as tourists.

The only other things of note in the Dex entries are that its metal ‘whiskers’ are heavy and slow it down, but provide it with a lot of force to go through bedrock. They also act as helmets and sensors to help it as it travels.

And that was the Dig line. Quite the ride that was. I didn’t have much to say about regular Diglett and Dugtrio, but damn the decisions made with the Alolan versions. Diglett may be a simple little thing, but it is cute and effective at what it does. Dugtrio may be a lazy evo, but……uhh…..at least it sounds cool when chanting with Diglett. Digletty, Digletty! TRIO TRIO TRIO!

The Alolan versions can kiss my ass. Call me grumpy and old all you want about my opinions on some mega and Alolan etc. versions, but these are just insultingly bad on every level. They’re uncreative or laughably goofy at best and headache-ingly goofy and offensive at worst.

Next up, Meowth and Persian! We have a LOT to cover here.