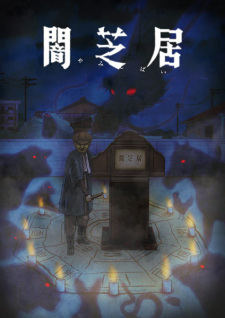 Breakdown: Someone forgot to post the full review of this series after Animating Halloween was over.

And I’m not naming names, but it begins with a Fiddle and ends with a popular candy bar name.

Anyhoo, I learned a couple of days ago that Yami Shibai 10 is airing right now, which is cool.

Season nine has a theme for the first time in what feels like eons. This season has a zodiac animal theme to it, which I didn’t even catch onto until ten episodes down the line. I don’t know if I’m not bright or the creators didn’t make it obvious enough, but here we are. I think it’s pretty cool to have a horror based zodiac theme to the stories, and they have exactly the right number of episodes, so that works out quite well.

This was quite the interesting season, so let’s go down each episode real quick.

Episode 2: The Man in the Rabbit Hutch – Very creepy episode with horrifying sound effects, but has an ending that is a little too predictable.

Episode 3: The 44th Sheep – If there was ever a chance that counting sheep could be made scary, this episode made as big of an effort as anyone could.

Episode 5: Paper Mache Tiger – An incredibly sad story that still manages to deal a good amount of tension and creepiness. I loved it.

Episode 6: Spirit Ox – One that was bordering on boring until the end where it becomes very sweet.

Episode 7: Mr. Rooster – Not scary at all, but really makes you think. The ending was confusing and cliché, though.

Episode 8: Rocking Horse – One of my favorite Yami Shibai stories to date. I just wish it were longer.

Episode 9: Snake Celebration – A very intriguing idea with some pretty strong creepy vibes at first ruined by a lame ending.

Episode 10: Boat Meat – Loved this episode for the most part, but it has an unreasonably confusing ending. It’s made a little less confusing if you know Japanese, but even then the ending is still very depressing.

Episode 13: The Year of the Cat – A clever story just not all that creepy.

Web (or Mobile?) Special (Episode 0): The Old Well – Surprisingly, for a limited release special episode, this was quite creepy. Maybe some of that is attributed to the vertical format, given the subject matter, but I enjoyed it.

Overall, Yami Shibai 9 was one of the strongest seasons we’ve had so far, which is good because the series was really starting to lull into very, very average territory. We had a few gems, some really interesting ideas and only a few episodes that were simply “fine.” I hope, with everything I have, that Yami Shibai 10 and possibly onward continue the upwards trend so we can have plenty of fun for many Halloweens to come.