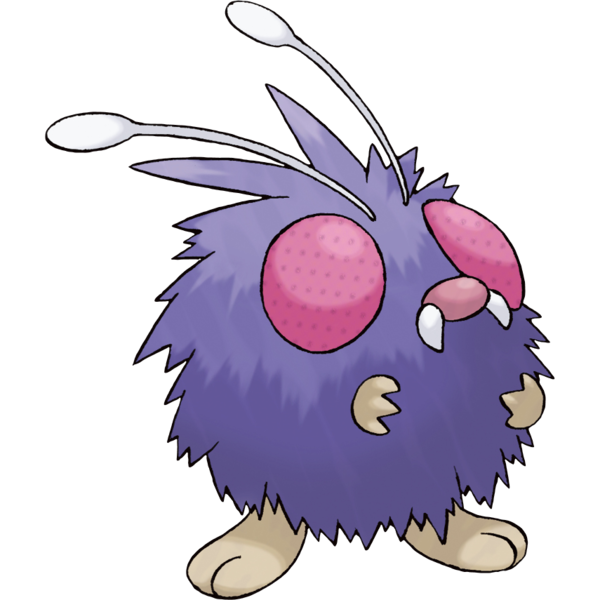 Name: Venonat is a pretty cute name. It’s fitting, snappy and, for lack of a better term, ‘buggy.’ It’s a combination of ‘venom’ and ‘gnat.’

In Japanese, it’s called Kongpang, which I don’t care for at all. It’s not a cute name, it’s kinda clunky, and it just sounds weird to me. This name is supposedly derived from the word ‘konchu’ meaning ‘insect’ which, well, fair enough, I guess. It is an insect.

Design: Venonat has always been one of my favorite Bug Pokemon. I love its big red eyes, its furry purple body and its little hands and feet. It’s quite adorable.

Sprite-wise, R/B/G are cute, but Yellow is a bit too overly purple. There’s no part of it that isn’t purple. Technically, all of Gen I has this issue with Venonat, but Yellow’s is particularly bright purple.

Gen II is cute, with an adorable eye flashing animation in Crystal.

Gen III is still keeping up the cute, this time giving it a little dance in Emerald.

All of the Gens after this are still very cute with the only one I feel like mentioning in particular being HG/SS where it gets a tiny little cute kick animation.

Shiny Venonat is very simple yet cool. I really love the shade of blue that they used for its eyes and mouth. I do really like the shiny as a whole, I just wish they had maybe changed Venonat’s fur color to something other than purple, because now the whole color scheme clashes. For some reason, I feel like it’d be cool if they changed Venonat’s fur to be white and changed the eyes and mouth to that blue color. There aren’t many white shinies, and I think it’d look awesome that way.

Gen II’s first shot at this shiny made the fur more of a blue color than a purple, and I think it worked a lot better than just blue eyes. Sad to see that they didn’t keep that color scheme.

Dex Entries and Backstory: The most prominent detail of Venonat’s physiology is, of course, its large red compound eyes that can light up. Venonat’s eyes provide it with intensely powerful vision and radar, which it uses to catch prey at night. Venonat is nocturnal, though this doesn’t seem to be something that’s true in the anime since they’re always out during the day, and they like to sleep in the dark holes of trees.

Venonat’s stiff fur is coated in poison that releases in higher quantities the more it shakes, which I honestly never knew. I thought Venomoth was the only legitimately toxic one of the two. I guess Venonat isn’t any other Pokemon’s prey, then. That’s good. 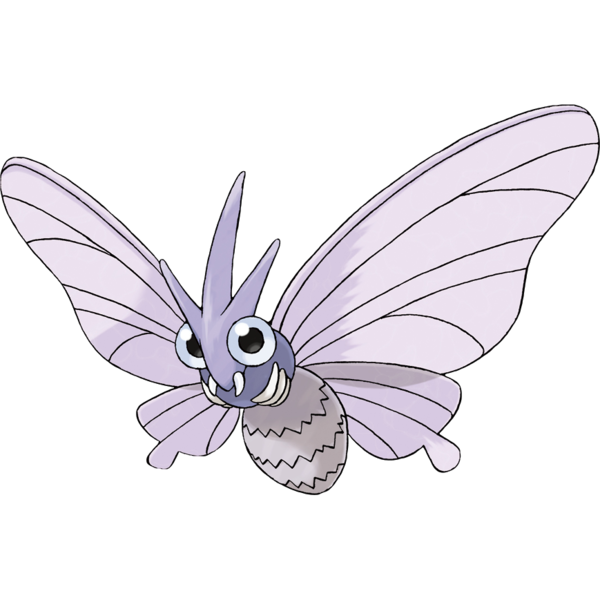 Name: Venomoth’s name is a combination of ‘venom’ and ‘moth.’ I like the name well enough. It’s very fitting, sounds fine and builds upon Venonat’s name well.

Sorry, I had to get that out of my system.

Morphon is not just in reference to the word ‘metamorphosis,’ poking at the transformation Venonat undergoes upon evolution, but also the genus of butterfly called Morpho.

Fun Fact: In France, it’s known as Aeromite (derived from ‘aero’ for ‘air’ and ‘mite’ for ‘moth’), which I think sounds cooler.

Design: Venomoth looks…….fine. It’s a moth alright. It’s a little cute, but it’s really just a moth. There’s not much about it that stands out besides its almost comical googly eyes. Why did it lose Venonat’s big red compound eyes? I like the lavender color scheme, but there’s no contrast at all. The cutest official Venomoth image I’ve seen is the one from Pokemon Shuffle/Battle Trozei.

Put it this way, if not for Pokedex completion reasons, I’d never evolve a perfectly good Venonat into a Venomoth.

I really don’t have anything to say about any of the sprites. Some of the early Gen sprites were way too color saturated, Yellow in particular being super purple, and Gen II’s sprite was more pinkish with a more purple shiny, but that’s about it.

I love Shiny Venomoth’s color. It is a GORGEOUS shade of blue. Not much else to it, though.

Dex Entries and Backstory: Venomoth’s Dex entries are basically just regurgitations of Venonat’s. Venomoth also chases prey at night, stays in trees, has good vision and radar vision, and it is covered in poison which gets dispersed as it moves. The only real differences are that the poison is in the form of dust-like scales instead of being secreted onto fur and that the color indicates what the poison will do. However, even that is quite a bland note. If the powder is light, it will paralyze you. If it’s dark, it will poison you. The Pokedex in Pokemon Adventures also indicated that Venomoth have a short life span, but I’m not sure if that’s canon.

In terms of design, hold on to your hats folks – it was based on a moth. Specifically, it was based on swallowtail moths or Uraniidae, which also secrete poison onto their wings. It’s also speculated that the fangs may be in reference to vampire moths. The shiny version seems to be based on the blue morpho butterfly, which is very fitting considering its namesake.

And that was the Veno line, folks. Really not all that much to discuss, sadly. I do love Venonat, and Venomoth is fine, but there’s just not a whole lot to them as Pokemon.

Next up, the Dig line!