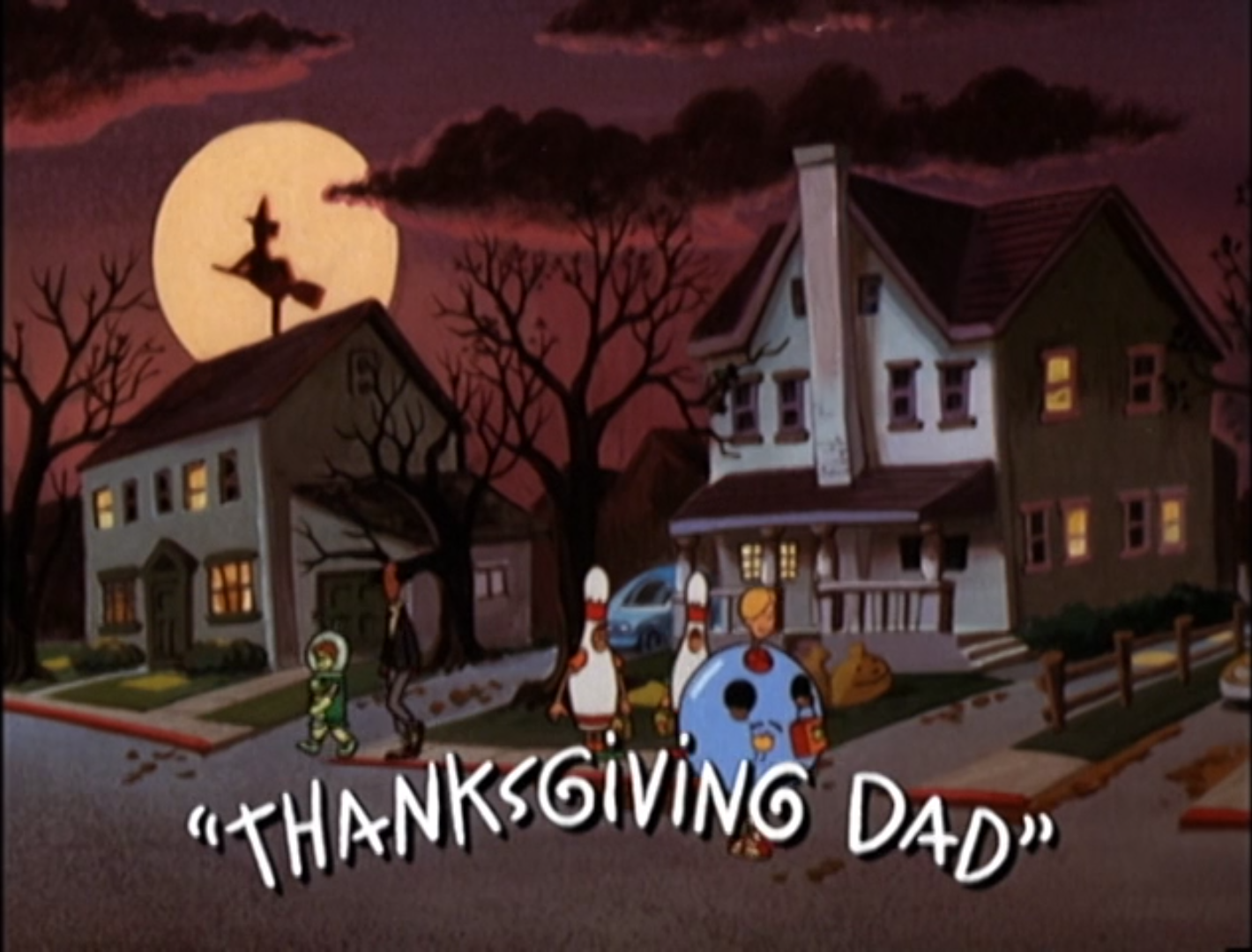 Plot: On Halloween, Pepper Ann gets a call from her dad telling her and her sister to prepare for a surprise from him on Thanksgiving. She believes he’s going to visit for the holiday, something that makes her super excited since she doesn’t get to see much of him since the divorce. But is she getting her hopes up for no reason?

Breakdown: No, your eyes aren’t deceiving you. No, this isn’t a sign of the end times. I got a Thanksgiving special out, ON TIME, and it kinda sorta doubles are more Animating Halloween stuff….a little….it is for the first minute and a half. I’m counting it.

Like I’ve mentioned several times while doing these Thanksgiving special reviews, it’s very, very difficult for them to stray from the norm. Basically any Thanksgiving trope you can think of is here. Parent rushing to get the dinner to be absolutely perfect, basically a warzone at the grocery store, not being able to find one specific item that you need for the dinner, crazy relatives who won’t stop fighting, the yearning for the kid to eat at the adult table, and finally, the one thing practically no Thanksgiving special is without – the dinner getting completely ruined but it ends up okay in the end.

However, this special does add something that I don’t believe I’ve ever seen in any other Thanksgiving special – how kids with divorced parents deal with Thanksgiving.

Pepper Ann’s parents broke up some time before the series began, and their divorce is shown to impact several aspects of her life in the show. Thanksgiving is one of the key moments where family is supposed to be all together. However, that just doesn’t happen in many households with divorced parents. Either they have two Thanksgivings at separate times at both houses or they just stick with one and maybe get a visit or a call or something. I can’t speak from experience because I didn’t grow up with divorced parents, but that’s what I’ve gleamed from others.

It’s pretty cool to see a cartoon address this with not just one but two characters. You might remember that Pepper Ann’s best friend, Milo, also has divorced parents, but his parents divorced quite a while before Pepper Ann’s did so he has more experience in that area. Milo bounces from house to house on Thanksgiving – and he doesn’t spend any of it with his parents. He just wanders between his friends’ houses.

Milo is a bit jaded when it comes to family and Thanksgiving. He tries to keep Pepper Ann level-headed when it comes to her belief that her dad will visit for Thanksgiving. He doesn’t know that he won’t, nor does Pepper Ann know that he will, all he said was he had a surprise for Thanksgiving. Milo just knows from his own experiences that the parent who doesn’t get custody tends to drift away, and holidays like Thanksgiving end up getting lost more and more in the jumble as they build up a new life after the divorce. They just tend to forget and wind up sending money or gifts sometimes to make up for it.

Milo’s experiences are very sad, and I kinda wish that we had put a little more focus on his holiday bouncing around houses and not actually spending any time at home than we did with Pepper Ann. Both of their experiences are valid, of course, but, also of course, she ends up with a happy ending, for the most part, while Milo’s life with his broken up parents is still fairly sad. Like, does his mother and step-dad not care where he is right now? Does he not do anything for Thanksgiving with his family?

Pepper Ann was, sadly, mistaken. Her dad never did intend on visiting for Thanksgiving. His surprise was that he was piloting a blimp for a big Macy’s-style Thanksgiving day parade and got to wish her and Moose a happy Thanksgiving and give them a heartfelt message on TV. He also said he’d see them next week for visitation, which just begs the question….when is his visitation? Surely he had at least one visitation during the month between Halloween and Thanksgiving. Pepper Ann acts like she rarely ever sees her dad anymore. How infrequent are these visits?

This special was pretty entertaining for what it was worth. It never really got that deep into drama, not like As Told by Ginger or Hey Arnold would do, but they hit enough notes for a show like Pepper Ann. Also, there were numerous jokes that were pretty funny, and I was also fairly amused by Pepper Ann’s constant fantasies of her father trying desperately to get to the dinner.

Thanksgiving Dad is good, but not great. I don’t think it’s on anyone’s must-watch lists for the holiday, I barely even remember watching it when I was a kid, but it has some unique and grounded aspects that are worth exploring, and it has good humor and heart. Check it out while you’re waiting for the turkey to cook. Or while you’re recovering from Thanksgiving dinner. Or, if you’re not in the US…..just….watch it whenever ya want. I’m not your mom.