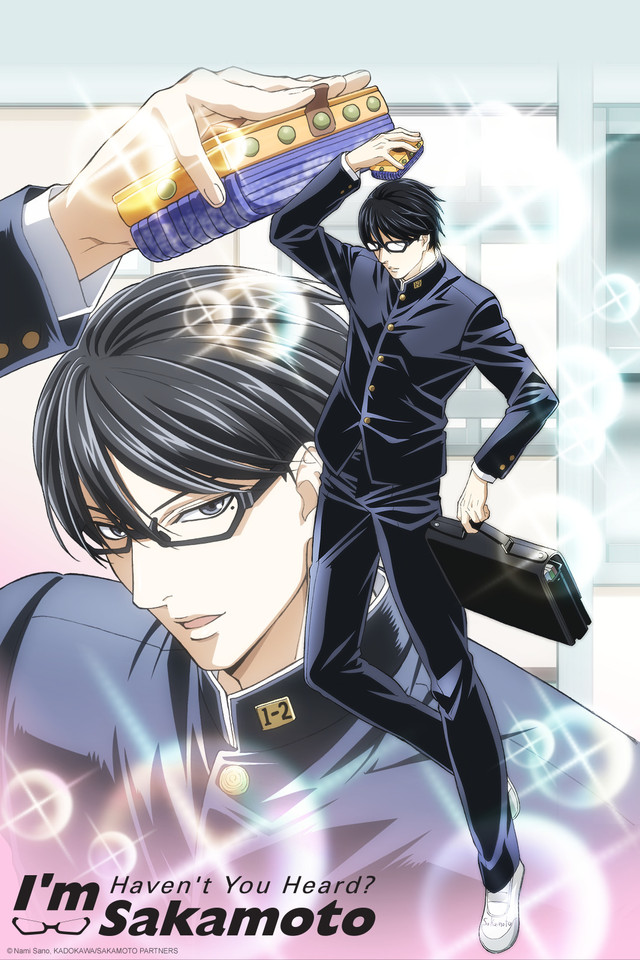 Plot: If perfection exists, it’s personified as Sakamoto. He’s gorgeous, gets perfect grades, is extremely athletic, oozes charm and has pretty much everything go in his favor. Even when jealous classmates try to take him down, he easily comes out on top with style.

Breakdown: This series was suggested to me a while back, and I’m happy to report that I enjoyed the first episode very much. It’s a pretty unique premise – amping up the idea of this perfect golden hot guy character to insane levels and being so over-the-top with him that it’s actually very funny.

The world was easy to build and the characters just as easy to introduce. They seem like largely one-off characters besides Sakamoto, though, as it seems to be a repeating cycle of ‘Rrrgh I hate Sakamoto because he’s so perfect and gets all the attention. I will sabotage him!’ *sabotage fails* ‘I now love Sakamoto!’

I did think this episode had the most boring opening scene I’ve seen in a long time. Just having a faraway shot of three boys bouncing a ball back and forth with the most minimal animation they can muster as they talk about Sakamoto for about two minutes. What’s even worse is this is a running gag….

Sakamoto, as a character, is obviously super cool and exaggerated. He does everything with this flair that would otherwise come off as odd in other shows, but everyone fawns over here. He is truly perfect, and that makes for some great comedy

However……..that’s also my main concern with this show.

This series is 13 episodes long, and each episode seemingly has two stories in it. I don’t think this premise is strong enough to uphold 13 (technically kinda 26 I guess) episodes. It’s funny to see Sakamoto perfect himself out of so many situations and see how the sabotage/challenges of his fellow classmates fails over and over, but he’s too perfect. I already know he’ll come out on top in every situation without even trying. Part of the fun is figuring out how he’ll get out of it, but you still know he inevitably will.

How many times can you see him stylishly do something amazing before it gets old?

And how long can a character who is seemingly perfect from all angles carry a show? He’ll certainly never grow or have challenges to overcome, so the entire series is reliant on his shtick being strong enough to carry 13 episodes/26 stories, and I’m really unsure about that. Some of the situations are quite funny even without him, like the plot with the bee, but Sakamoto’s the main focus, so it’s iffy.

The art and animation are quite nice, even if those faraway shots make me think they’re cutting corners to save money for the more complex animation, which is fine. Sakamoto’s scenes have to be as stylish and sleek as possible.

The music was also fairly unique and pretty nice.

Still unsure as to how much fuel this sparse plot can power this series for, but I enjoyed myself quite a bit in this opening episode, so I look forward to continuing it.