4B: Little Dude – Tommy is brought to be a learning aid at Didi’s high school Home Ec. class. 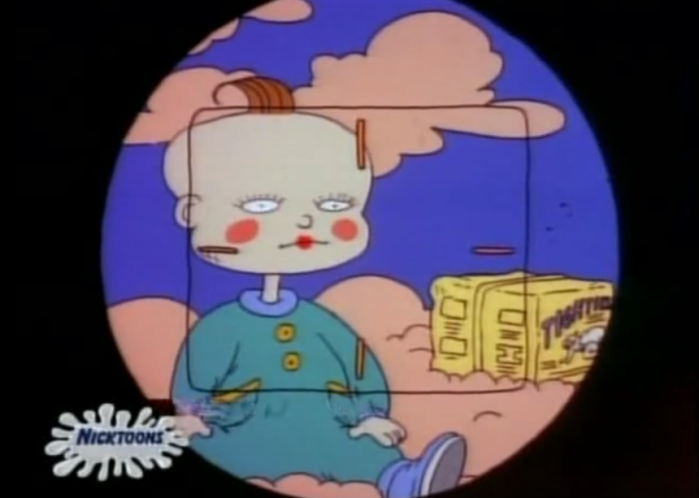 This is the first episode to mostly center on Phil and Lil, and it’s largely poking fun at the entertainment industry while also having a lot of random slapstick that Rugrats really loved in the early days.

One thing I really remembered about this episode was the director guy, Jonathan’s, obsession with his diaper box pyramid. That detail is mostly unimportant, but the whole time I was rewatching the episode, I was waiting for when we got to the point where he’d yell “MY PYRAMID!” Like the Cabbage Merchant from Avatar the Last Airbender.

Other than that, we have adults either not understanding babies or not giving a single dime store fuck about them. Ya know, the hallmark of all Rugrats episodes.

Here, we have the director guy acting like a one-and-half-year-old would know how to take stage directions on his own, Betty handing off Lil to a random slob she doesn’t know, and the random slob instantly placing her on the floor and completely neglecting to watch her because he wants to continue stuffing his face with donuts and being incoherent.

He’s wearing a t-shirt that says ‘Best Boy’ and I never got that joke, nor do I get it now. Is there some joke in the industry that best boys are useless sacks of crap? If you don’t know what a best boy is, they’re basically, what Wiki describes as, the ‘foremans’ of their respective crews, either electric or grips. They’re not the heads of their crews, that would be the gaffer (for electric) and key grip, but they are responsible for a lot of scheduling, hiring and general management. Sounds like they have a pretty important job. Why is the parody of it being portrayed like this? Am I not getting something?

For all of you playing at home, Lil ends up in the goddamn rafters and nearly dies because of course she does.

Then the unsupervised Phil climbs on a camera dolly and drives it around the set, nearly crashing the diaper pyramid down. However, another staple of Rugrats episodes is that all of this chaos usually results in a happy if not unrealistic ending. The advertising execs love the footage of the babies wreaking havoc, and they launch the commercial. Jonathan, having fired the kids and Betty before the execs gave their seal of approval, comes to their house to beg and plead for them to shoot more commercials for them. Betty vehemently refuses because she didn’t like how they were treated, which is probably our first parenting win in this series.

This episode was kinda drab, but it was fun enough to hold my attention.

This is one my absolute favorite early season episodes. It’s extremely cute and funny with many memorable moments, but the highlight is Ramone/Rocko.

Before we get started, does anyone remember that Didi was a high school Home Ec. teacher? It’s really, really easy to forget because they hardly ever talk about it or show her at school. I was a die-hard Rugrats fan for well over a decade and even I barely remembered that she was a teacher.

Anyhoo, Didi brings Tommy to school as a learning aid as she teaches her class how to change a diaper, which I can’t decide if that’s a parenting fail or not. Don’t they usually use baby dolls for this? Isn’t it kinda weird to use an actual baby with an actual poopy diaper? Isn’t it just flatout better to use a baby doll anyway because it’s not like everyone in the class can change Tommy. Not everyone would get a chance to do it themselves.

Like typical teenagers, they can’t bring themselves to change him because ew, but then the coolest guy ever walks in – Ramone also known as Rocko. Ramone looks like a typical ‘cool’ guy. He’s got the leather jacket, the slicked back hair, the sunglasses, the chains etc. But unlike your cliché leather-toting ‘cool’ guy, Ramone actually is incredibly cool. He walks in like a boss, has everyone step aside and changes Tommy flawlessly. Tommy then adorably steals and wears his sunglasses, which Ramone thinks is very cool. I agree, Tommy looks really cool with those glasses on.

Ramone explains that he has a baby brother at home so he’s used to changing diapers. Using his comb, he dubs him ‘Little Dude’ and Tommy instantly takes a shine to him.

Once class is dismissed, some girls convince Didi to let them hang out with Tommy while she’s on her lunch break and she agrees. The girls really like Tommy, but while they’re dealing with some jerk football player they accidentally leave him on the tailgate of a truck that pulls away without them noticing.

I am going to give the girls a break for ignoring Tommy for a bit, but I’m going to ding them for leaving him on the tailgate. He could’ve easily fallen off and gotten severely injured or killed either by wandering off the edge or by the force of the truck pulling away. To their credit, they do quickly realize he’s missing and run all over the place trying to find him, but still.

While wandering, Tommy finds Ramone, but he soon walks away without noticing Tommy. He drops his comb, and Tommy tries to find Ramone to return it to him. Tommy’s forlorn face when Ramone leaves the room without realizing he’s there is so heartbreaking.

Then we have the epic cafeteria scene where the jerk football player from before and Ramone end up facing off and wiping food on each other after Tommy accidentally gets pudding on the football guy’s jersey. When a full-on food fight breaks out, because cafeteria scene in the 90s, the football jerk angrily picks up Tommy. Ramone instantly stops all of the chaos with a single sentence when he demands the jerk give Tommy to him. Ramone puts Tommy in his leather jacket, leaves the room and instantly allows the food fight to resume as he leaves the doorway.

This guy is too amazing for words.

Tommy is eventually returned to the girls, one of whom instantly falls in mutual love with Ramone at first sight. Aw that’s sweet…Girl, seriously, nab him up. He’ll be an awesome dad. If he treats you anywhere near as well as he treated Tommy here, or even Didi, he was very nice to her too, he’ll be a perfect guy for you.

The girls return Tommy to Didi, who is none the wiser of what happened, but is happy to hear the girls learned a lot from their experience with Tommy. Returning Ramone’s comb to him, Ramone lets Tommy keep his sunglasses, which are still super cool, and Ramone bids farewell to the Little Dude.

I left some stuff out for the sake of brevity and because I’d just be ruining jokes for you, but this is a really great episode with some adorable and hilarious moments and a really cool and likable character. I would’ve loved to see Ramone/Rocko return, but alas, he was a one-off.

4A – I won’t ding Betty too much for handing off Lil to the Best Boy because she needed to be somewhere to help Phil, and she probably just assumed he would be competent enough to hold a baby for five minutes, but I will ding the Best Boy because he didn’t even try to hold her for longer than five seconds. He instantly plopped her on the filthy floor and ignored her. That’s bad enough, but then she ends up climbing into the rafters and nearly falling to her death all because he’s a lazy gluttonous slob. X5

Once Lil has everyone’s attention, literally no one watches Phil, which leaves him open for causing havoc on the ground. He gets ahold of one of the camera dollies and nearly crashes into the diaper pyramid. X3

4B – Not much here. I’ll ding the tailgate thing (x3), as I said, but considering Didi was trying to teach her students about child care, there were three girls watching him and she was only allowing it for a lunch break, even telling them to find her if he gets fussy, I won’t get on her case.