Plot: Bakura, suddenly appearing from nowhere, challenges Yugi to a duel using his friends’ favorite cards shuffled into his deck. He accepts, but not before Bakura reveals something shocking – he has his own Millennium Item – the Millennium Ring. He uses its powers to separate the group’s souls from their bodies and inject them into their favorite cards.

What’s more is that Bakura is not really Bakura. He’s an evil spirit inhabiting Bakura’s Millennium Ring who forcibly takes over Bakura’s body whenever he pleases in order to collect the Millennium Items for himself. He believed he could easily steal the Puzzle if he removed Yugi’s soul, but he was wrong. Yami takes over Yugi’s body after Yugi’s soul vanishes and vows to win back his friends’ souls during a Shadow Game.

Honda is actually a gun buff in the original series, which explains why his favorite card is the Cyber Commander. However, I’m shocked they let Tristan actually have a gun. He’s a CYBER Commander, so it’s probably a laser gun or something, but still. Maybe 4Kids was still in that weird phase where they would allow guns on screen but only under certain circumstances, like with Pokemon.

Tristan: “According to this tombstone, I’M DEAD!“ First a gun now a reference to death? Walking on the wild side today, eh 4Kids?

Also, the tombstone is edited to show Tristan’s name instead of Honda’s. 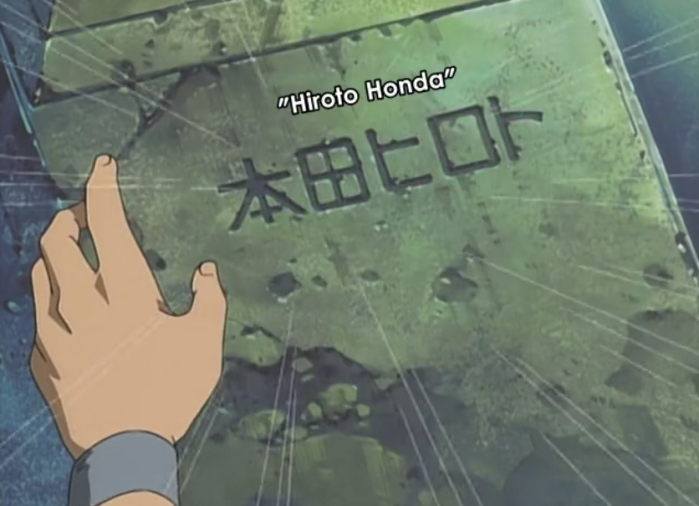 When a duelist suffers a loss of life points in this Shadow Game, they suffer physical pain. When Jonouchi beats Bakura’s White Magical Hat, Bakura clutches his chest and groans in pain. In the dub, he suffers no pain and only scowls.

Regular Yugi doesn’t have any inner monologue running during the duel because his soul is supposed to be in the deck. Only Yami is in Yugi’s body during the duel. In the dub, Yugi’s talking in his head like nothing is different.

Fairly minor, but in the original, Yugi and Yami have been keeping the spirit a secret from the group. Yugi knows that there’s a spirit in the Puzzle in the Japanese version. In the dub, he just says he doesn’t really know about the spirit, but that he feels a voice calling out to him when he duels sometimes. Nice try, Yugi. Trying to cover up your cheating ways.

Yugi: “Wait a minute, Joey, I was just played so I have to move.” Just because you summon a monster doesn’t mean they’re obligated to move at all during that turn. Any monster currently on the field, unless otherwise restricted by spells, traps or effects, can act. This is true even in Duelist Kingdom. Yugi really, seriously should’ve known that….In addition, Bakura also had a face-down spell or trap card out, so it would’ve been really dangerous to attack right then….No wonder Yugi always needs to use Yami. He sucks at this.

The Just Desserts card is way overpowered in this season. Since the duelists only have 2000 LP each, you could easily end a duel in a few turns if your opponent has four monsters out.

Yugi attacks a face down monster AGAIN just because Joey said Yami was cooler than him.

Not only does 4Kids get the card information wrong on T’ea’s card when she activates her effect (I think they used the template for the Dark Magician) but they also made the card upside down…Which is weird, because they had it the right way when she started to glow….It was still the wrong CARD, but it was at least facing the right way. Also, uhm….Huh?….The Magician of Faith’s card effect activates when it’s flipped face-up. She may have come out of hiding, but her card was never flipped face up/put in attack mode. Unless Yami did this without announcing his move.

In the original, Bakura said the merchant also sold his father a Duel Monsters card. In the dub, Bakura just says the merchant said the Millennium Item had something to do with the game.

I like this duel arc. Seeing the group as Duel Monsters is a lot of fun even if their lives are on the line because of it. Isn’t it so coincidental that all of the group’s favorite cards have human traits? Yami Bakura was always the best enemy in Yu-Gi-Oh to me, even if I feel really bad for poor Bakura. I don’t know why he was destined to have such an awful Millennium Item when he’s so kind.

Next time, the Shadow Game ends. Can Yami keep his friends out of the graveyard until the last life point depletes?