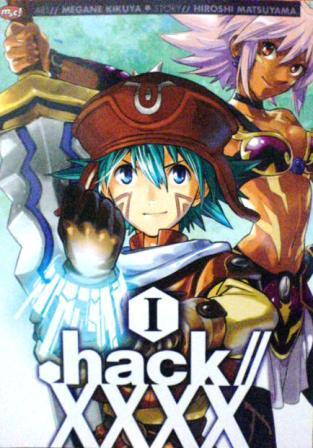 Plot: In a different re-telling of the events of the original Dot Hack games, Kite is a newbie player in the massive MMORPG, The World. He’s being shown the ropes by his friend, a highly skilled veteran player under the name Orca of the Azure Sea. While playing, Kite and Orca come across an insanely powerful monster that cannot be damaged by any attacks. In an effort to save his friend, Orca ends up getting killed by the beast, and somehow his physical body falls comatose at the exact same moment.

Kite, determined to save his friend, is given a special bracelet with the power to defeat the monster that hurt Orca, known in the real world as Yasuhiko. With his online friends and an odd boy with similar powers named Cubia, Kite sets out on a mission to find out what The World really is and how to save Yasuhiko.

Breakdown: Anyone who has played the games will notice that, indeed, this seems like a faithful retelling of the games’ story. However, you’ll note one very important part near the end. Cubia is not a monster. He’s an NPC who befriends Kite and helps him defeat the eight phases with a power similar to that of Kite’s bracelet. He’s given characterization, a personality, a true backstory as both a shadow of the power of the bracelet and maybe some kind of failed being similar to Aura.

Other than this, though, the story is entirely the same as the games, which means that the quality of the manga in comparison to the game (which I find to be great) hinders on how well this change worked. Ultimately, I think it worked pretty well. Having Cubia be an actual character who both tricks Kite and yet seems to actually care for him is an interesting change to the story that helps shake things up a bit more than just essentially being a monster that is anti-Kite’s bracelet.

Cubia’s personality is similar to, yet not copying, Aura’s origins, personality and being. While Cubia is merely data, he’s somehow able to develop feelings and perhaps have some concept of a soul. Despite the fact that he ultimately does become the monster that needs defeating, his evolution as a character is nice to read, and his friendship with Kite was especially well done.

Cubia has a power to help him defeat the phases, meaning Kite’s not as alone as he feels in this mission, even barring the help of Blackrose and the others. Cubia was a very nice person, seemingly, and they connected on several levels. It was a great decision to have Kite still defend him even while knowing what he truly was. Kite’s level of caring and respect for those he has befriended, no matter if they’re data or not, shined through here.

That coupled with the game’s story makes for a really good manga, but I do have to say that people who have played the games are still going to know every thing that happens through the whole manga, including pretty much everything about Cubia even if he is an NPC here. They make the big final battle really awesome in manga form, and it’s just a great read the whole way through, even if it is fairly short.

I will say that they go through the Phases a bit too quickly for my liking. Cubia himself defeats some without our knowing. It makes the journey seem very quick and rather simple, making Kite’s later push against his friends for fear of their lives seem a bit drastic and sudden.

Recommended Audience: There’s virtual violence and one shot of Balmung getting attacked that was pretty damn graphic for a MMORPG. Plus slight non-ish nudity by Aura. 10+