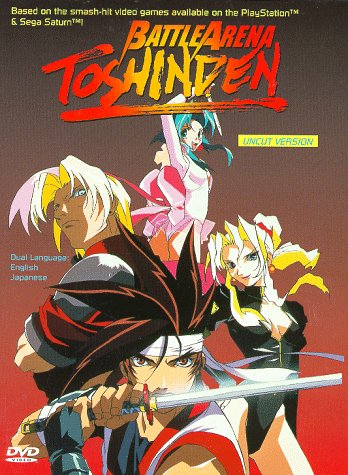 Plot: Uhhh, there’s some tournament called the Toshin tournament, but that doesn’t matter because we never see the tournament over the course of the show. This anime is also based off of a video game of the same name that I’ve never played, but I hope to God at least the fans of the game find some meaning behind this show.

A man named Eiji was apparently the last tournament’s winner, and his brother, Sho, has turned bad, apparently, and has betrayed his family, so Eiji’s on a mission to find him…..apparently.

But there’s also some lady named Uranus who dresses like Lady Gaga’s lobotomized twin. She’s evil and runs some evil organization called….The Organization. Eiji along with a bunch of other characters who are never adequately explored fight The Organization.

Breakdown: THEM Anime Reviews has, at least at one point, labeled this the worst anime they’ve ever seen. Ouch. Now, I’ve disagreed with THEM before, and, at this point, I’ve seen my fair share of crap. Do I share the same sentiment?

……Uhh, I wouldn’t say ‘worst’ but it’s pretty damn low on the list. It’s bottom 10 at least. This anime is confusing as hell to me. I really, truly hate when shows, anime or otherwise, expect that you should know the full backstory behind something, especially when the backstory is explained in an entirely different medium. I’ve never played Battle Arena Toshinden, yet this anime not only acts like you should know full well the backstory to this whole mess of an OVA, but it also assumes you know every character and what their story is too.

Not like they even did anything either. They were simply meant to fight the lacky no-name no-face enemy characters to give the main guys a chance to go after the characters who actually somewhat matter. Eiji, one of the main characters, actually said “We don’t have time to deal with those pawns!” Yeah, great, thanks for telling me there’s no reason to give a crap about what they’re doing.

I didn’t even really get to know the main character that well. He’s a master martial artist and a nice guy…..that’s…about…it.

Another character who literally shows up just to create a plot point is Ellis. She’s a cutesy knife thrower in the circus who was also a participant in the tournament that I’m told happened. She appears in the final minutes of episode one and is in a coma dying from poison five minutes into episode two.

Let’s address Uranus, hm? Well, first of all we don’t see her do anything. She’s one of those behind-the-scenes villains who talks big then runs off when she’s confronted face to face. Oh and…she grew wings out of nowhere.

By the way, can someone please explain to me what the hell this is? 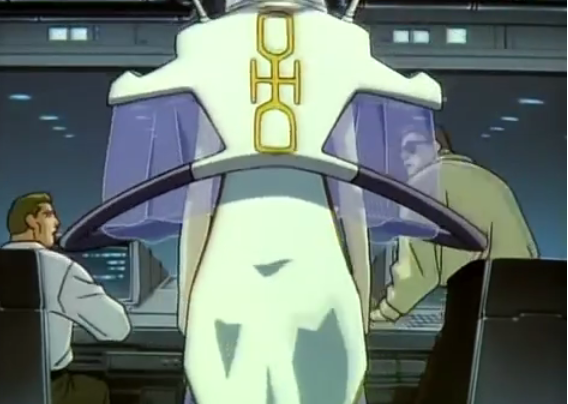 It looks she fell in the shower, got wrapped up in the shower curtain, curtain rod and all, walked to the mirror and said, “….Hm…that’s fine. Time to go to work.”

And look at the front! 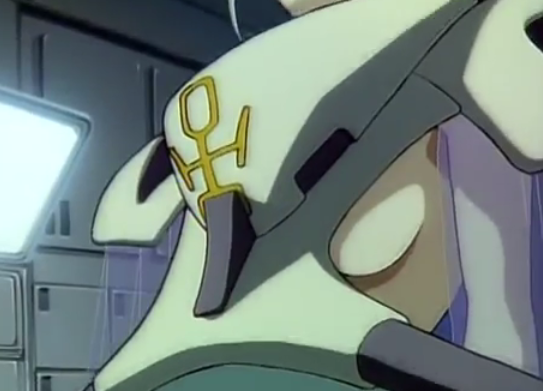 Her dress has no top! What was that listed as in the item description? “Side-Boob-Displaying Uncomfortable Dress from Hell”? That has got to be one of the dumbest clothing designs I’ve ever seen in anything.

Oh well, she has to look better when she’s prepared for battle, right? 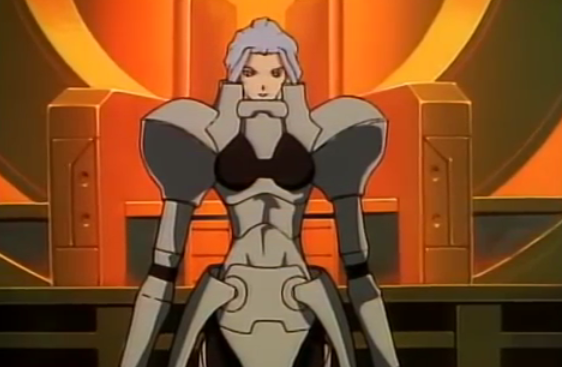 Wow….more practical but still ugly as all hell. I doubt she’d be able to move in that thing, though, considering the way the shoulder guards are designed. Also, all that armor, looking clunky as a robot made of washing machines, and the two areas they don’t cover are the head and the boobs. Oh well, at least she has boob socks – the strongest of all female armor.

I am thoroughly unimpressed with everything. Thank you.

Our only two actual villains in this movie who do things are Sho and a man-machine (because ‘android’ or ‘cyborg’ are just too complicated) named Chaos. Sho’s obviously the big brother who joined the bad ranks for whatever reason but still wants to fight his brother in an honorable match. Chaos is just a crazy guy wielding a sickle. He has a grudge against Gaia for beating him a while back and that’s about it.

From what story I could piece together, there is nothing here. It’s filled with so many cliches and suffers from such a lack of originality that it’s just sad. Being cliché doesn’t have to be a dealbreaker. You just have to be creative with the cliches…and they’re not. I could not care about anything in this OVA. Not the story. Not the characters. Nothing.

This isn’t even really good for action. The action scenes, while not being particularly boring, weren’t particularly interesting either. Their moves are so uninspired that I honestly would never be able to tell them apart if they were done one after another.

Oh and did I mention that the ending basically resolves nothing? They manage to get the antidote for Ellis by defeating Chaos. The reason they couldn’t defeat him before was because he was turned into a man-machine. Every time he fought one of the main guys, he’d get data on their fighting styles and predict their moves. How was he beaten? Eiji shrugged him off and said to just fight using each other’s moves so Chaos couldn’t predict it.

Eiji: “You’re a fool for thinking we’d just do the same moves over and over.” You know what? That is a great point and a gigantic flaw in this multi-billion dollar experiment to make man-machine fighters. Way to go, Uranus, you dumb stupidly dressed sack of idiot.

Uranus gets away, the real Sho shows up (don’t ask) yet disappears as soon as he arrived to just say “Yeah I blew up all the stuff you had. Just wanted to end this BS. Bye!” Uranus escapes due to her unexplained sudden growth of wings (even though I don’t see how she really did escape unless there was a series of holes leading straight up out of the building), the good guys survive the explosion complete with walking out of the flames without even attempting to walk at a brisk pace because bad-ass.

At the very end, some guy, I guess, according to the Youtube comments, his name is Vermillion, comes out, Eiji smiles, unsheathes his sword, slashes once and reveals the title screen before the end credits start.

Look, if you want to release an OVA that is purely meant as an advertisement for a game or a manga or whatever – be my guest. There are plenty of times when that can work, but you have to do it well. You can’t expect that your audience knows all of this crap that may or may not be explained in the video games, and it’s really bad practice to do that because chances are the video game will become dated and phased out due to people ditching their old consoles for new ones, but the OVA will stick around for future viewings and people will be insanely confused.

I guess the Youtube commenters must’ve been fans of the game because I kept seeing “this is a good anime” and the like. However, seeing as how many people were also bringing up how this OVA is such a blast from the past, I’m going to either believe they have nostalgia goggles glued on or this OVA really is a lot better when you know of the game. However, I believe even if I knew of all of that stuff that this would still be awful.

Art and Animation: The art is terrible. It’s exaggerated fighting anime style, but it’s still really bad. I don’t know if I’d say it’s some of the worst I’ve seen, but it’s still awful. I will commend them for actually animating the action instead of resorting to still screens, but the animation as a whole is pretty damn bad.

Voice acting: English Dub – Ranges from ‘okay’ to ‘Wow, they really hired this guy?’ Most of the characters lean on the side of ‘okay,’ but characters like the Duke were just laughably bad.

Music: The music wasn’t that bad, but like everything else it wasn’t memorable.

Bottom Line: Unless you’ve played the old Battle Arena Toshinden games and can find some value in this OVA, there’s no point whatsoever in watching this. It’s confusing, poorly paced, extremely poorly written in terms of both story and dialogue, gives you no reason to care about anything and there’s not even good mindless fight scenes to enjoy. And I do have to reiterate – there’s no ‘battle arena’ in Battle Arena Toshinden. There WAS one. You just missed it.

Additional Information and Notes: Battle Arena Toshinden is based on a series of video games for the Playstation (1-3 and Vita) Game Boy and Sega Saturn. There hasn’t been an incarnation of the series since 2009, and even then it was released under an entirely different name with no connection to the previous storyline.

It was co-written by Masaharu Amiya (episode one) who also did minor work on Ai Yori Aoshi, Beyblade, Karin, Inuyasha and….Yosuga no Sora.

Episode two was written by Haruo Takayama, and either the dude is too ashamed of this work to display it anywhere he’s listed or the Wiki doesn’t have accurate information. The only Haruo Takayama I can find did the screenplay for both of the Turn A Gundam movies and wrote the script for Jungle do Ikou’s OAV. Nothing anywhere about Battle Arena Toshinden.

The OVA was originally licensed under the now defunct Central Park Media, then known as US Manga Corps. Their licenses were distributed to many other media companies, but it’s unclear who owns the license to Battle Arena Toshinden now, if anyone owns it at all.