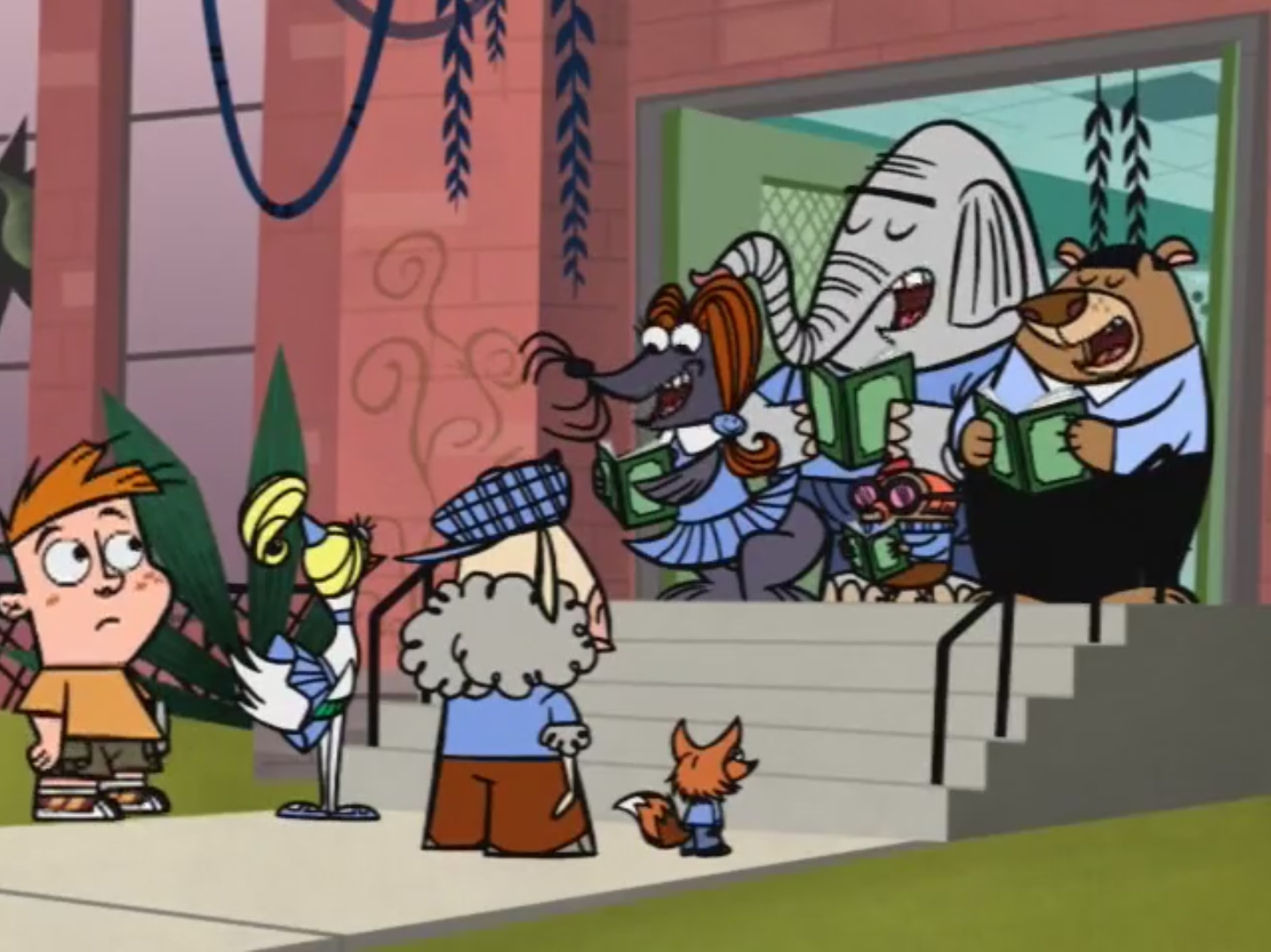 Plot: Animas has come, but Adam can’t participate because he’s a human, and the holiday is all about following your animal instincts.

Adam decides to go back to human school since he doesn’t belong in animal school, but he’s still bummed about losing his friends back in the animal school. After sucking down a glob of wasabi from an Asian stereotype, who I can’t decide if they’re even offensive because it’s like they’re trying really hard to go overboard with the stereotype so as to make it overtly obvious so that’s the joke but the show’s not funny enough to pull it off so it’s just confusing and uncomfortable, Adam’s sinuses clear (he had been suffering from bad allergies) and he’s able to smell the Animas rock, which reeks because everyone ‘decorates’ it by pissing on it. Adam does the same and Animas is saved.

Finally, Adam has a couple of moments where he does like….poetry (?) as he tries to express how much his inability to belong at the animal school bums him out. It’s okay, but it’s also just not funny.

Merry Christmas and happy holidays to all my lovely readers! May your holiday bring you happiness and peace, even if you’re unable to travel or meet with family in person. This year’s been rough to say the least, but times like these make the holidays all the more important. Remember, the holidays are what you make of them no matter what’s going on in the world around you. Stay safe, be merry and thank you all for making my holidays a little brighter. 🙂

Plot: Brandy schemes to have Santa take her back to Florida on Christmas.

Breakdown: Brandy and Mr. Whiskers was one of those shows I was definitely aware of and gave a chance, but I ultimately just found it to be another ‘coma show.’ I know I’ve watched it, but dammit all if the space left behind by the that show isn’t just immediately overwritten by my brain hard drive.

It’s just not funny or interesting is all. A spoiled rich girl ends up in the jungle and befriends a bunch of oddballs while she desperately seeks the comfort of her own luxurious home. Brandy’s obnoxious, Whiskers is obnoxious, and the side characters range from obnoxious to just okay.

I think one of the main issues I had with the show as a whole is that the main duo just don’t have much in regards to comedic chemistry. It’s obviously the overly energetic jokester with the irritable straight man/girl but they just don’t click in my opinion. Then again, nothing really clicks for me with this show.

The Christmas special is equally blah. Brandy tries to bring Christmas to the jungle in order to lure Santa there so she can hitch a ride home, but she’s on the naughty list. She accidentally causes Santa’s sleigh to crash because Whiskers is an idiot, and, surprise, she and Whiskers have to take over his job and she kinda-ish learns the true meaning of Christmas as a result.

I say ‘kinda-ish’ because, while she does have a nice moment once, she clearly wants to manipulate Santa into believing she’s made a big Christmas revelation so she’ll be put on the nice list and get a ride back home.

The stupid thing is that she had a perfect opportunity to head home and she didn’t take it all because she thought the manipulation method would work. Sure, when she got to her house she left because she legitimately wanted to help deliver the rest of the presents, but when they were all done she could have gone back home and told Whiskers and the others to return the sleigh to Santa instead of just hoping he believed her ‘learned the true meaning of Christmas’ spiel and would take her home. But nope. She did and he didn’t and the status quo of the series was restored.

Also, why does Santa looks so horrible in this show? It looks like his beard is an Ed, Edd and Eddy sized Jawbreaker stuck in his chin.

Also, also, I kinda don’t want to go here, but why do the toucans remind me so much of the crows from Dumbo? They are very obviously black women stereotypes in the bodies of black birds. Am I crazy? Tell me I’m crazy. I can’t not see it. Obviously, it’s not as overt of a problem as the crows were, but I made the connection the instant they spoke….

If you were a fan of Brandy and Mr. Whiskers, maybe you’ll get some enjoyment out of this special, but otherwise you’re not missing much.