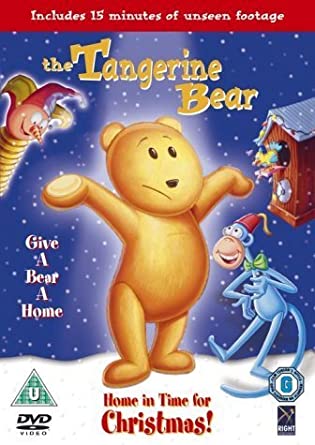 Plot: A little teddy bear accidentally had his mouth sewn on upside down, giving him a frown instead of that signature teddy bear smile. As a result, no one wanted him. He bounced from the discount bin of a big department store to a little secondhand shop called Winkle’s on a street with little traffic. Over time, the little bear’s fur became bleached out from the sun, giving him such a bright orange coloring that he became known as the tangerine bear or Tangie for short. All Tangie wants is to be sold to a nice family for Christmas, but no one wants a tangerine bear with a frowning mouth.

Breakdown: This is another one of those Christmas movies I definitely remember watching as a kid and was glad to rediscover. The Tangerine Bear: Home in Time for Christmas! is an adorable and heartwarming tale of a sweet teddy bear who wants nothing more than to find a family until he realizes that he has already found a family right there in that store with the other things that are a little off like Jack, the Jack-in-the-Box whose bells don’t work and is afraid of going into his box, Bird the bird of a coo-coo clock who has a busted beak and is afraid of coming out of his house without ensuring the coast is clear so he won’t run into anything, and Mr. Winkle’s (originally) grumpy pet guard dog, Virgil.

It has a great message of recognizing that you’re special and can find love and family just the way you are, even if you’re different. Tangie is a sweetheart despite his perpetual frown, though he does frequently complain and get down in the dumps. He has every right to be, and I really wouldn’t bring it up if they didn’t make a point that he’s supposed to be a really happy little bear on the inside, but you just can’t notice due to his upside down mouth.

Jack is a great guy and a great friend, and Bird fits right in as the straight man, though not to the point where he’s an annoyance or a grump. Virgil also isn’t unlikable before he gets an attitude change. He’s very serious about his job as a guard dog, which includes keeping the toys from wandering around and causing trouble. After Tangie and the others save his life, he becomes a very good boy and friend of the toys, and he’s about as sweet as Tangie.

The story is really cute, although the ending is questionable to say the least. On Christmas Eve some guy walks in and offers Mr. Winkle 200 bucks for Tangie and Jack, claiming he collects rare and unique items like them…….Tangie is from a teddy bear line that was mass produced, but he had his mouth sewn on upside down and got his fur bleached out in the sun. How is that so rare and amazing it’s worth 200 bucks?

Jack’s situation makes even less sense because he’s just a broken run-of-the-mill Jack-in-the-Box with broken bells and an unwillingness to go back in his box.

But not as delusional and, quite frankly, sad as Mr. Winkle who refuses 200 and even 300 dollars for these toys because they’re his family.

Okay, I overthought the Mr. Winkle thing, so if this next part depresses any fans of this movie, I am so sorry.

This dude doesn’t have much money. He’s lucky he manages to make rent every month because no one ever really shops in his store. The only reason he starts making decent sales is because the toys decide to decorate and spruce themselves up. Mr. Winkle is really bad at his job. He leaves repair work on items undone for way, way, way longer than they should when he literally does nothing all day besides hang around his store and eat at the local diner, which is a bad habit because you shouldn’t eat out constantly if you’re struggling to pay rent (he lives in the apartment above the shop.)

He does sell items throughout the movie, but he’s offered $300, that he really needs, for items that he just leaves in the window….because they’re his family? (By the way, he leaves them there for so long that Tangie’s fur bleaches out because of it.) Okay, from a movie standpoint, this is really sweet because the toys also see Mr. Winkle as their family, and it’s great that he doesn’t care about their flaws and loves them as-is, but from an ‘overthinking it’ standpoint, holy hell this guy is lonely as shit if all he has for family are his dog and broken toys in his store.

Not to mention the even more depressing aspect of this whole situation. Mr. Winkle is pretty darn old. He’s so old that decorations suddenly appear in his store window and he just shrugs it off as his failing memory. As Toy Story has forcibly taught us by ripping tears out of our eye holes, toys are basically immortal unless they’re trashed. Mr. Winkle probably doesn’t have many years ahead of him. What happens to the toys then? He seemingly doesn’t have any children or other family to inherit the toys, the store or, even more sadly, Virgil.

At the very least, the guy who tried to buy Tangie and Jack says he’ll be back with friends later to look at more items, hopefully ones Winkle’s actually willing to sell.

In the end, and ignoring all of the weird and sad parts about the ending, Tangie, Jack, Bird and Virgil all rejoice that they don’t have to separate and that they’ve found a loving home for Christmas.

The art and animation are alright, even if some character models for the people are terrible, but something is really wrong with whatever they did to the copy on TubiTV, unless it was just an animation issue from the start.

Nearly every frame has spots where the lines blur and it is horrendously distracting. I have no clue what happened here, but I couldn’t go more than a few minutes without noticing this problem.

The music was very sweet, gentle and Christmassy. Not the most memorable songs in the world, but still good. The voice acting was also good with the talents of the late Tom Bosley as Mr. Winkle, Howie Mandel as Jack and Johnathan Taylor Thomas as Tangie (huh, that’s two JTT sightings now.) This was made in 1999 so his voice was definitely puberty-ized by this point, but he still manages to make Tangie sound innocent and child-like.

Overall, as long as you don’t let your mind wander in the end and if you can ignore some really annoying blurring issues in the copy, this is a really great and sweet Christmas movie for the whole family. Like I said, it’s on TubiTV right now for free if you want to check it out this holiday season.