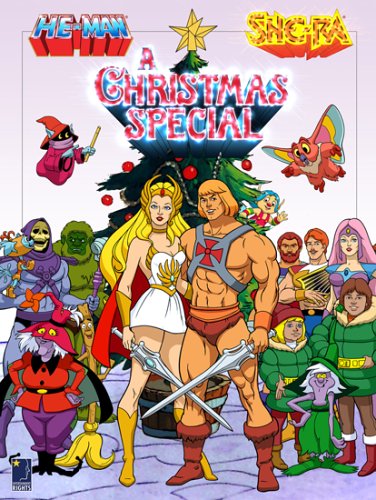 Plot: Adam and Adora are finally able to celebrate their birthday together for the first time. As festivities get set up, Adam and Man-At-Arms launch a SkySpy drone airplane to keep an eye on Skeletor. Orko accidentally hitches a ride on the plane and ends up on earth where he meets two children who teach him about Christmas. When Man-At-Arms teleports Orko back to Eternia, the kids get brought back with him, and they teach everyone about the magic of Christmas.

Meanwhile, Skeletor, Hordak and Horde Prime aim to kidnap the kids to bring a stop the goodness and love of Christmas.

Breakdown: I never watched much He-Man when I was a kid. It came on right around when GI Joe did (a little before it, I think) but I only watched it here and there. I never really got into it.

I never watched a single episode of She-Ra because I don’t think they ever aired it on any channel I regularly watched. If they did, I just never noticed or watched.

Both are on my to-watch list of old shows that bring shame to my cartoon reviewer name for having not watched alongside Transformers and Thundercats.

Although, from what little I caught, I did immediately love Skeletor. There’s just something about that bonehead that I get endless joy from.

Speaking of joy, I do remember catching this Christmas special back in the day on Cartoon Network for whatever reason. And even though I didn’t think much of it back then, I got a strange amount of enjoyment from it this time around. Maybe I’m in great need of some cheesy-ass 80’s fun, maybe this is too goofy and nonsensical for me to care about nitpicking it to hell and back or maybe it’s legitimately good.

….No, seriously. Who knows? Because I’m getting so many mixed messages by the fans. Some are calling it one of the worst Christmas specials ever made, and as one reviewer put it, the second worst Christmas special behind the Star Wars Christmas Special (fucking ouch) and others just enjoy it as being some nostalgic cheesy fun. (Also, one reviewer on IMDB complained that the special, and I quote, “lacks the masculinity of the great show.” *snort*)

The Christmas parts are just as corny as you’d expect, and the action is pretty decent. However, the one thing I definitely remembered from watching this as a kid was Skeletor basically being forcibly taken over by the Christmas spirit, bonding with a robo-puppy and saving the kids from his boss. I got so giddy when that happened.

Is it objectively a mess? Yes. Was that song in the middle vomit-worthy? Oh yes. No doubt about that. Does that make it any less enjoyable? To me, no. I can see how some might be bothered enough to just switch it off, but I had legit fun with it. And this is coming from someone who nitpicks to a point of concern. Sometimes, things are just stupid enough to be so much fun that I don’t care, and bonus points come when it’s in a Christmas special. Maybe He-Man/She-Ra fans would argue, but eh.

……I did freak the hell out when I realized She-Ra’s horse could talk though. I dunno why I recoiled so much at that.