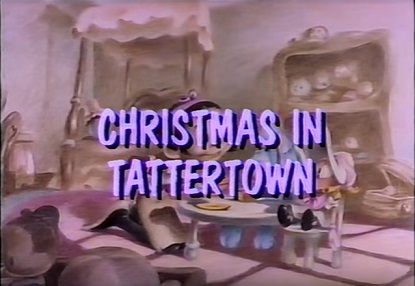 Plot: Debbie loved playing with her stuffed dog, Dog, and her doll, Miss Muffet. One day, Dog, Muffet and Debbie were sucked through a mysterious book into a strange place called Tattertown where ‘junk’ comes to life. This place has never known Christmas, so Debbie decides to bring the magic of Christmas to them. Muffet, however, is taking advantage of her newfound life to be evil and wreck everything good.

Breakdown: Ah Ralph Bakshi. The guy definitely has his own flair and was basically the father of adult animation, but I really never enjoyed much for his work outside of Mighty Mouse: The New Adventures. Respect the hell out of him, but I don’t vibe much with his work usually. I don’t really care for his casual affiliation with John K much either, but I’m not sure of his current status with him, so I’ll leave that irk on the backburner.

Christmas in Tattertown was a pitch pilot for Nickelodeon back in 1988 for a series that would have been called Tattertown, but the series wasn’t picked up.

(Although, let me be transparent here. According to the Wiki, the real reason Tattertown didn’t get picked up was supposedly because of the heat he got for the infamous ‘cocaine’ scene in Mighty Mouse: The New Adventures which aired when Tattertown was on the table. Considering the tone and more adult-ish style of this short, I can imagine they were worried he’d do something similar in the future of that show, even though Bakshi vehemently denied that that was the intention of the shot, even citing concerns for his own young daughter and his strong disdain for drugs.)

The animation is great for a late 80’s production, especially for a pitch pilot where poor animation is entirely reasonable and understandable. It’s very bouncy, particularly the ones based on older cartoons, and pretty fluid, even if some of the lines vanish and the frames jut around every now and then. In typical Bakshi fashion, the art ranges from perfectly fine to weird to what the hell is this even?

The sound design is….to be expected. The voice acting is passable at best and “must’ve accidentally replaced my ear buds with power drills again” at worst. The lip syncing is also quite rough, but I guess I’ll blame the pilot-ness there. The sound effects are basically passable, but the special is kinda quiet – again, understandable with a pilot.

As for the story, though….ech. Can you even say there’s a story here? Debbie finds out no one in Tattertown has never heard of Christmas, even though, as Debbie herself points out, with all the junk in town it’s unlikely that they’ve never learned what Christmas is until now. A bunch of this stuff would have to come from Christmas or be Christmas themed.

Actually, this special reminds me a lot of Spongebob’s first Christmas special, Christmas Who? though it’s more understandable that a bunch of undersea creatures don’t know of Christmas. And in both specials, Santa randomly appears at the end, meaning he visits the place but has never brought presents there until they randomly learned of the holiday. Pretty shitty practice, Santa.

After that, Debbie just tries to make Christmas for the Tattertown residents and keeps complaining that they’re not doing it right. She comes off as bratty fairly often, which, I guess she’s supposed to anyway for reasons I’ll get to in a second. Even when they are trying to do things right, like cutting down a Christmas tree, she complains. A little lumberjack toy was trying to chop down their sentient Christmas tree (who is also Jewish. I found that kinda funny.) and while it’s fine for her to stop him from doing that, of course, she tells him that Christmas isn’t about chopping down trees or presents, it’s about being kind and putting an end to strife for just one day. Everyone tears up at her speech, and then the lumberjack tries to chop down the tree anyway and Debbie smashes him….killing him? He’s never seen again.

No one gets the true meaning of Christmas until Debbie plays a record of ‘White Christmas’ by Bing Crosby. Everyone suddenly gets it and becomes immersed in the holiday somehow. Either his dulcet tones are magical or this is a lazy resolution. Seriously, Debbie’s big speech about kindness and good will doesn’t click with them but a song about how nice it is to have snow on Christmas does? Actually, it’s not even about the snow, really – it’s about nostalgia for childhood Christmases when you’d go out and have fun in the snow. Do they even get snow in Tattertown?

Meanwhile, Muffet, who has become evil 11 seconds after becoming sentient because Debbie was basically Elmyra if she was more into dolls than animals, is plotting to ruin Christmas.

She’s basically just an annoyance. She’s kinda funny when dealing with her minions, but her voice is awful. I also don’t understand a single molecule that is the scene where she desperately wants to eat the final slice of ‘tobacco pie’ which is literally a pie made out of tobacco with cigarettes and a cigar sticking out. I wanted to puke just seeing that thing. 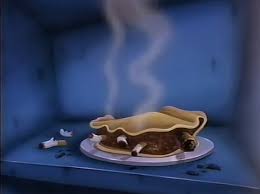 And then a stove eats it instead and shits out ashes……Or maybe peed them out, because they came out the front….

She rallies an army and tries to take down everyone celebrating Christmas, but it literally backfires. One part I laughed out loud at was when her fighter planes thought Muffet was telling them to attack each other. It’s said in a Goofy-esque voice and the other guy praises her idea and they just start kamikaze-ing each other. It’s pretty funny.

In the end, Muffet is thrown in jail, gets a bunch of presents, but Debbie finds her and reclaims her as her precious doll, which is basically hell for Muffet.

Overall, this short is okay. It garnered a few yucks (and a couple actual yucks) and the loudness and chaos is tolerable, sometimes legitimately funny. As a Christmas special, it kinda sucks. They do aim for the ‘true meaning of Christmas’ and everything, and I do love how Harvey, the little old-fashioned style puppy dog, is so enamored with the idea, but it definitely doesn’t have much in the way of actual Christmas spirit. They pretty much just collect Christmas stuff, Debbie complains and then they mistake Muffet’s attack for a Christmas celebration, get all happy about it, but Debbie still complains because that’s not the ‘right’ way to celebrate Christmas, and then…Bing Crosby randomly saves the day.

Unless you’re a Bakshi fan in a Christmassy mood or a big fan of old animation, I don’t really see a reason to recommend this. There are better Bakshi works and better Christmas specials to check out.