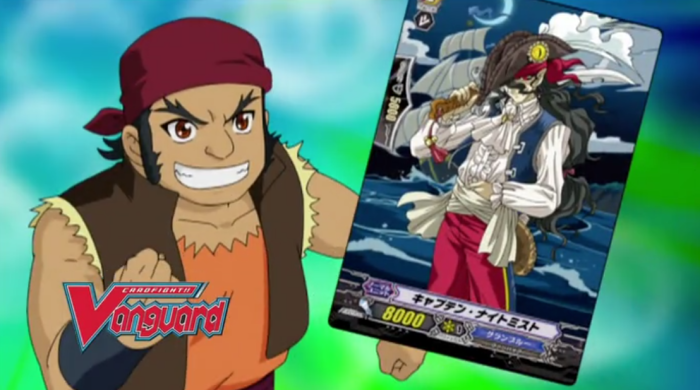 Plot: Aichi and Gouki are set to face off yet again, and the entire regionals are on their shoulders. Aichi manages to grasp a newfound confidence in himself and his royal knights, but Gouki’s no slouch either. He’s bringing his A-game with his Granblue deck filled with undead pirates who can return from the drop zone. Will Aichi manage to come out on top, or is he not quite at national level yet?

Breakdown: First of all, A + on that title. Doesn’t sound awkward. No sirree.

Second of all, I was half and half about this episode. On the one hand, it was great seeing Aichi get his second wind and even have Gouki on the ropes for a little bit (and Aichi’s voice actor was really going for it in some scenes) but I can’t help but feel this match so far is a little slow. I felt like anytime even the slightest thing happened we were brought back to random crap the others were doing, whether it was making banal comments about the match (Aichi’s different, he’s better, it sure is an exciting match etc.) or just Nagisa or Morikawa (Can we please write these two out of the show?) making insufferably annoying comments. The pace of the match just kept getting interrupted over and over.

And, somehow, I felt like the intensity was off here even when the focus was on the match. Maybe I’m just not feeling it because I haven’t watched the series in a while, but this didn’t feel like the start to the final match in a tournament, at least until the very end. Nothing really wowed me or impressed me, which is why, when the announcer started getting ridiculously excited about the match, I literally rolled my eyes.

Granted, Aichi has been doing well – certainly better than he did the last time he faced Gouki – but something still felt off.

Either way, I did leave a little excited to move onto to episode 22 and the conclusion (I assume) of the match because I really don’t know how this will go. It’s such a weird spot to be in. He could win and show that he’s improving substantially, or he could lose and take it as a learning experience for the next big tournament they try to participate in.

Nothing about this match so far screams that it will go one way or another, so it’s really up in the air, which, as I’ve said before, is quite refreshing for this type of series.

I do find myself enjoying Aichi’s deck the more I see of it. A paladin/royal knight theme that supports each other is pretty cool and very fitting of Aichi’s character. If I ever managed to successfully play Vanguard, I’d probably want a deck like that.

Next time, will Aichi be able to take down Gouki’s undead pirates and win the match? How can he fight off two grade threes with only one on his side? Can he lead team Q4 to victory?