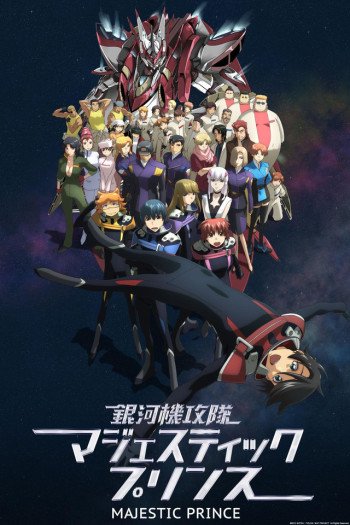 Plot: Team Rabbits is known as the ‘Fail Five’ in the Military Junior Pre-Academy or MJP where they pilot mechs and train to defend their space colonies from threats. One such colony needs some pilots to buy them time while they evacuate from a massive attack by enemy aliens. Despite their lack of teamwork and sporting the lowest scores in class, Team Rabbits is chosen.

Even though they have no experience in real mechs, they’re able to pull themselves together and succeed in their mission. When they discover there are civilians left behind with no ships to take them back to safety, their appointed leader, Izuru, takes it upon himself to take a step towards being a hero and goes forth to force the enemy to retreat so he can rescue the colonists.

Breakdown: I love mech anime. Something about giant robots and lasers and space wars is always really cool to me.

That being said, it’s a bit hard to break out in the genre because a lot of things either seem like they want to be an Evangelion clone or a Gundam clone.

This definitely isn’t gunning for an Eva clone, but it might still be a less-serious Gundam clone. We’ll have to see.

I definitely appreciate the more teamwork-oriented focus this series has. It always seems like it’s one singular protagonist who does all the important stuff or they pretend like it’s a team when it’s really, again, just one person doing everything.

Izuru might be that considering he’s the leader and his one goal in life is, literally, to be a hero, but I’ll reserve judgment.

Each person on the team has their own concrete personalities, though some need a bit more fleshing out like Ataru and Kei. That’s completely understandable this early in the series, though.

Izuru is a very likable protagonist. I like MCs that are really brave and yearn to be heroes, but still obviously have a lot of reservations about what they’re doing. He’s also an artist, so that earns a +1 from me.

Asagi is the hot-head of the group. Kei is the serious one who holds basically a supervisory role in combat. Ataru is the sniper who has much more reservations than anyone, but is also a geek about weaponry and tech.

Then there’s…..*sigh*…Tamaki. I quickly learned to hate Tamaki. I have no idea why she’s even in this academy. She’s insanely boy-crazy and hardly ever doesn’t think about guys or finding her true love. She’s also clumsy and has such moe characteristics that she even has that breathy whiny baby voice I just wanna stab.

I just don’t know why she’s here. Why is a girl who acts like an infant in a damn military academy?

The mech designs were pretty unique and fun to watch. The fact that the mechs react to their emotional states and thoughts based on their DNA is somewhat unique, and I like that each mech has a specific purpose in combat and they’re not all just ‘robot with gun’ or ‘robot with sword.’

In regards to being a first episode, this one does alright. We establish the main cast pretty well, but the world-building definitely needs work. We can tell they have space colonies and they’re at war (?) but we have no idea who these aliens are or why they’re attacking. They just have weird green mechs and their own unique language. Also, they live on Jupiter, I guess?

The music was alright, but mostly forgettable so far. I have the same notes for the voice work, basically, but damn Tamaki’s voice, seriously. I guess I can’t fault her VA too much, because I can’t say the voice doesn’t fit the character, but it’s so annoying when combined.

I also have to mark off the direction because some of the editing and directorial choices are very unappealing, like sudden quick cuts and the really annoying habit of bobbing the camera and zooming in real quick.

I’ve heard really good things about this, and, even though I was a bit uncertain at first, I’ve been told that it gets much more interesting and intense after a handful of episodes. Let’s see where the journey takes us.