Chapter Five’s plot was adapted in episode 13 so we won’t be going over it here. This post will be updated when we reach episode 13.

Chapter 6 – Burning Struggle to the Death 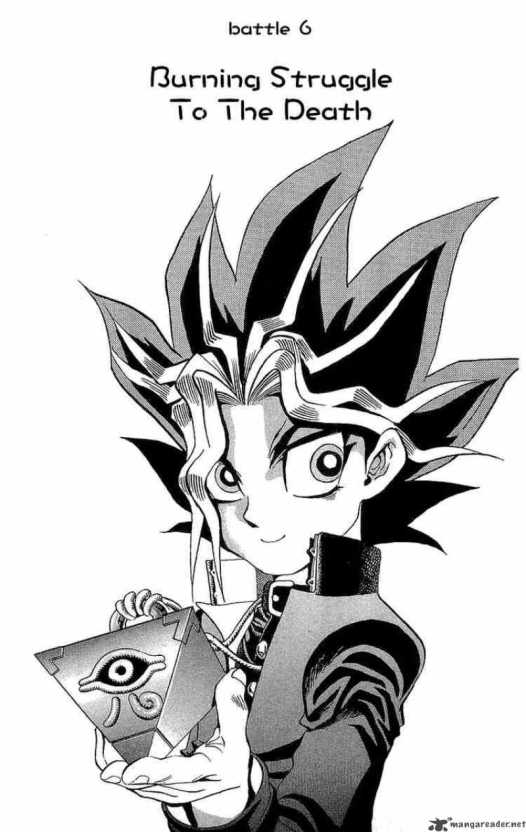 Anzu is organizing a festival for school and is asking the class for suggestions on a stand they can put up.

Hanasaki makes another appearance briefly which is nice. He suggests making a manga table, which everyone mostly gets confused by, but no one makes fun of him.

A lot of suggestions are thrown out, and Yugi’s the last one to comment. He suggests a stand with carnival games and everyone gets really jazzed about the idea. He’s so happy about everyone liking his carnival game idea. It’s really sweet

Later, everyone works really hard to make some cool carnival games – a simple stack of bottles, a shooting gallery and a life-sized version of those pop-up pirate toys where you put swords into the barrel and try to make the pirate pop up.

Gorou and his gang of….cooking brutes knock all of their stuff out of the spot, even knocking Jonouchi and Yugi over and destroying some things, to take over the spot themselves. Their stand is a giant iron plate they plan to use for an okonomiyaki stand.

Yugi is taken over by Yami and meets Gorou later that night to challenge him to a very messed up shadow game.

It’s a game of air hockey, basically, but the puck is a chunk of ice and the arena is the iron plate, now superheated. Inside the ice is a vial of gunpower. When the ice melts enough, it will hit the plate and explode, so the aim is to ensure the puck is not near you when that happens. Gorou accepts.

This is a rare moment of Yami actually struggling in a shadow game. In every game before this, he has been ridiculously confident in his abilities, almost to the point where you think he’s cheating sometimes. However, this time he’s actually sweating and conceding that Gorou’s strength gives him an advantage in this game. Yugi’s body can’t keep up very well. He needs to calm himself and find a way to use Gorou’s speed and strength against him.

He makes the clever play of smacking the puck at an angle to create a small crack in it. When Gorou realizes how much the ice has melted, he puts all of his strength into hitting the puck one more time. He fails to notice the crack until it’s too late and the puck breaks open in front of him, causing the vial to fall and explode.

This is seemingly another instance of someone actually dying in a shadow game because Gorou never reappears after he gets caught in the explosion. I gotta say….he was a jerk but he didn’t deserve to go out like that. All he did was push Yugi and Jonouchi down and steal a festival spot, possibly wrecking some of the things they built there (The art makes it hard to tell.)

Granted, him accepting this shadow game is basically him attempting murder, but still. People get away with much worse in this series and still retain their lives.

Chapter 7 in the manga is somewhat adapted in episode 10 of the anime, but the story had to be drastically altered since Honda and Miho are so different in the anime. This post will be updated when I reach episode 10. 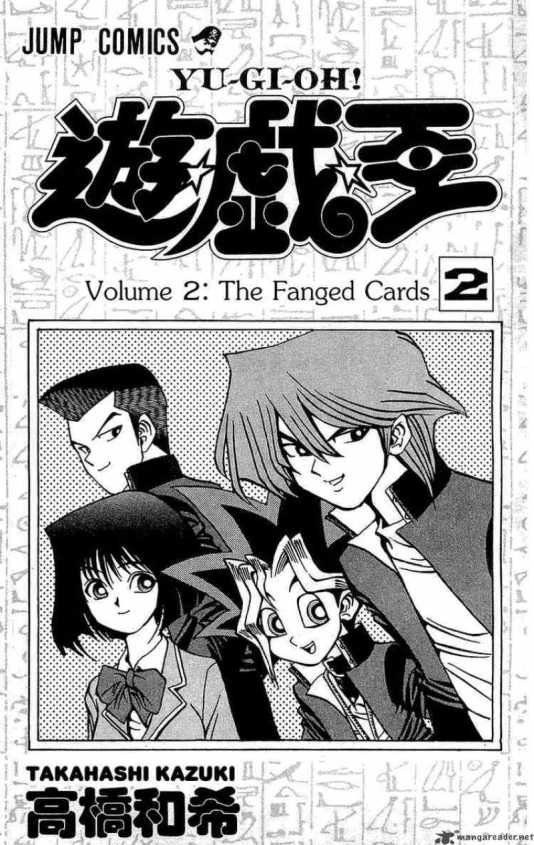 This chapter is both heartwarming and a little dumb. Jonouchi needs a new pair of sneakers and falls in love with an awesome pair he spots in a shoe shop in a bad part of town. The owner is a straight up crazy person who initially refuses to sell the sneakers to him because they’re rare. He won’t sell them to just anyone, so he posits a challenge. He’ll put a scorpion in the shoe. If Jonouchi is brave/stupid enough to put his foot into the shoe with the scorpion in it, he’ll sell him the shoes.

Jonouchi does so and is ‘rewarded’ for his ‘courage’ by the owner revealing that he never actually put the scorpion in the shoe. He faked it. But he’s impressed enough to sell them, at a half-off discount even. However, he warns Jonouchi of ‘hunters’ in the area who target people who have such nice shoes.

And right here is where you realize exactly where this is going, and it goes there. Jonouchi walks all of half a mile before he, Honda and Jonouchi are attacked by a group of thugs wielding a tire (Not a tire iron – a tire) and various tools. They beat the group up and steal Jonouchi’s shoes.

The thugs were obviously hired by the shop owner who seems to make a habit out of playing this trick so he can get a constant stream of money out of schmucks who want nice sneakers. I can’t imagine there are that many people who would do that, but I guess this is the world of original version YGO, where everyone’s a crazy asshole.

He screwed with the wrong reformed school bullies, however, because the group, even Yugi, decide to find the thugs and beat them down. They quickly reveal that they were working for the shop owner, and Yugi transforms into Yami to challenge the owner to a shadow game.

The owner kinda triggers the game himself by issuing the same challenge he gave Jonouchi, only this time there’s an actual scorpion in the shoe. However, Yami changes it up by dropping a handful of coins into the shoe. They each have to reach into the shoe one at a time and get as many coins as they feel comfortable nabbing. Whoever gets the most coins without getting stung is the winner. The owner adds on a stipulation that each coin is worth 100,000 yen, which Yami will pay him if he wins.

The game starts and after a few grabs, the owner starts getting nervous about his chances of winning the game, so he decides to fudge the rules by stabbing the shoe, effectively killing the scorpion, and nabbing all of the coins left in the shoe.

Yami reveals, however, that he not only broke the rules and betrayed his pet, but the scorpion is still very much alive. It stings him, and Yami takes the shoes to return to Jonouchi. We learn that the shop owner didn’t die of the sting, which surprised me a little. Jonouchi is so touched by Yugi going to the shop to confront to the owner that he gladly takes the shoes that now have a stab mark in them and cherishes them, which is so sweet I can’t stand it.

Next time, we’ll be heading back to the anime with episode three, which covers chapters nine and ten.

One thought on “AniManga Clash! Yu-Gi-Oh Chapters 6&8 (Placeholder) (Notes for Chapters 5 and 7)”