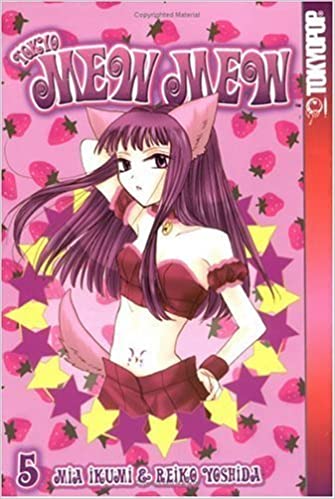 Plot: Ichigo can no longer keep her Mew identity a secret from Aoyama. How will he take the news?

– The Blue Knight is WAY more affectionate with Ichigo, especially upon first meeting, than he is in the anime. In fact, outside of a few touches and carrying Ichigo, BK never really does much with her in the anime. But in the manga, he hugs her, kisses her (on the cheek? Or chest? Hard to tell with the angle) he holds her romantically, almost hugging. It’s a lot, and like I said that’s all from their first meeting.

– There’s a near miss confrontation with Mew Ichigo and Aoyama that reminds me a lot of episode 13 where Aoyama is targeted by Kisshu and Ichigo runs the risk of Aoyama seeing her as a Mew and finding out her secret. Only the story in the manga is really dumb.

Ichigo returns to the aquarium and sees a fish flopping on the floor, which she immediately believes is a chimera animal, even though the entire aquarium burst…meaning there’d be a lot of fish flopping around. She makes a snap judgment to transform right there and she quickly spots Aoyama behind her, but he doesn’t realize who she actually is. He just asks her if she’s seen Ichigo.

– Pudding has a pet monkey in the manga?! Why was that not adapted?!

– I guess they put a lot of filler in the anime because we jump from episode 13 to episode 40. Now Pudding and Taruto are under Tokyo Dome. Only instead of Pudding finding the tunnel through sheer happenstance after an earthquake as she was attending a show, she was kidnapped. I kinda prefer the anime’s take because it had Pudding being proactive.

I also like the anime more in that they put additional stakes into Pudding’s situation. In the anime, she and Taruto eventually get trapped underground. They’re losing oxygen, but Taruto isn’t affected because he’s an ‘alien.’ Pudding, however, nearly dies, and Taruto struggles a lot with watching her suffer and the idea of letting her die down there. He actually ends up saving the both of them with his plant-controlling powers.

In the manga, it’s much less interesting, at least in my opinion. The girls literally defeat all of the chimera animals in a two page spread and Pudding is never in any danger as severe as what the anime depicted. Taruto, despite having some nice moments with Pudding, doesn’t gain nearly the same connection as he does in the anime, and he doesn’t save her life outside of one time where he spared her from getting poisoned. She’s just trapped in a cage hanging out with Taruto, more or less. There is more added risk later as Taruto attacks again with a bigger Chimera Animal, but The Blue Knight and Ichigo dispatch it rather easily.

The high point here is Pudding also gets to try her hand at using the Mew Aqua Rod. The Mew Aqua called out to her and she used its powers to grow the plant life around the dome to save it from collapse.

It’s great that she got a chance to shine, but I’m not sure it was really worth what we lost.

– The manga includes a passing suspicion that Akasaka is the Blue Knight, which is…Okay I guess. Thing is, it’s dropped just as quickly. BK hurt his shoulder in the same spot Akasaka did. That coupled with his charming nature lead Ichigo to believe he was BK. But then he explains that he hurt himself trying a new trick and broke a plate, which could easily be a gigantic lie, but Ichigo believes it immediately.

– The manga kinda contradicts the anime a little. In the anime, they make it a point that Ichigo sucks at cooking, at least if the chocolate cooking episode was any indication. Even though she had her mom’s help, she made a delicious lunch for her and Aoyama in the manga. Not really sure why the anime decided to make her a bad cook – though I guess that is a bit of a shoujo protagonist trope, kinda.

– Aoyama: “Why do they always attack (Ichigo)?”

Kisshu: “Because I have to. That’s the whole point, dummy.” Lol I can’t not love Kisshu sometimes.

– Aoyama finding out about Ichigo’s Mewness is much different in the manga. In the anime, it was Christmastime and Aoyama got injured in a big two-part battle over Mew Aqua in the town Christmas tree. In a daze, Aoyama seemingly recognized Ichigo in her Mew outfit and she later confessed everything to him while he was sleeping (or wasn’t sleeping?)

In the manga, he gets injured in a completely unrelated incident during a random Kisshu attack during one of their dates. Ichigo doesn’t want to see him get hurt anymore since he’s so adamant about protecting her, so she decides to oust herself in front of him by transforming.

During this incident, BK does badly wound Kisshu, but Kisshu additionally requests BK to kill him. He almost grants him his request, but Ichigo stops him.

Like the anime, Aoyama admits he’s known for quite some time, putting the pieces together himself because he’s not an idiot, but unlike in the anime where they pretty much just cuddle, he actually kisses her.

– In the manga, Ichigo fully transforms into a cat in front of Aoyama after she divulges her secret and she kisses him to turn back. Taruto learns of her transforming secret because of this.

– I guess the kissing is the trigger for transforming back at least.

-….As for transforming…..In the next scene after she leaves Aoyama, the next day I presume, she trips, falls and that somehow turns her into a cat. Taruto kidnaps her, planning to get revenge on her for what BK did to Kisshu, which is a pretty good plan, admittedly, because she can’t transform in cat form and she can’t transform back without a kiss (Still think that’s really dumb…) Alto, however, saves her by kissing her, allowing her to change back and transform into her Mew form. She fends off Taruto and finds out Alto is Shirogane after keeping hold of him for too long to try to check his injuries. His transformation has a time limit, so he couldn’t hold it.

This is a tiny bit similar but quite a lot better than what we get in the anime which is one of the silliest and most convoluted things they had done. Basically, Ichigo goes on a wacky transformation spree. She’d kept accidentally transforming under the most ridiculous circumstances and need to basically sexually assault any female animal she could find for the sake of transforming back.

In one instance, she tries to kiss a female dog only to be blocked by her huge angry boyfriend who has heard rumors about the ‘kissing maniac’ and wants to beat her up for targeting his girlfriend. Alto saves her and kisses her to transform her back, but, like the manga, she keeps hold of him beyond his limit and he transforms back in front of her, ousting his identity as Shirogane.

Additional props for the manga because it doesn’t insinuate that she can talk to birds or dogs, robbing the other girls of their only unique additional powers.

I struggled a bit more than usual in determining which version was better.

The anime did the brief brush Aoyama had with Mew Ichigo quite a bit better. She didn’t transform for no reason in the anime and the overall plot was more interesting and had higher tension. The anime also did the Tokyo Dome plot better in regards to tension, development between Taruto and Pudding and giving Taruto a neat moment. However, in an odd turn of events, the moment he got in the anime was stolen from Pudding’s big moment with the Mew Aqua in the manga, so that’s quite the bummer.

The manga does have its points of glory, though. I liked Ichigo revealing her secret to Aoyama better in the manga than in the anime, even if they don’t include the stuff about his backstory here. The way he ‘found out’ just made a lot more sense than the anime. I think both post-identity reveal scenes are equally good, even if the manga includes a kiss where the anime did not.

The reveal of Alto’s identity was also done better in the manga than the anime. Sorry, but the anime’s reveal was just built on a foundation of goofiness. A series of ridiculous pratfalls leads her to needing to makeout with a bunch of female animals and Alto saves her from an angry dog….Compare that to Taruto coming up with a good plan to strike Ichigo when she’s most vulnerable to get revenge for Kisshu, Alto nearly dying trying to save her from him and her saving him in return. It’s no real contest there. However, I will still ding the manga for making her transform at least once with no real trigger. She seemingly transformed because she tripped….

I also have to commend the manga for having increasingly better pacing, even though it’s still kinda bad, and I’m getting consistently disappointed that we’re not getting much time with the other Mews. There are only two more volumes left in the series and I feel like we just don’t know nearly enough about the other girls or see them do enough. It feels less like a team story and more of a “and the rest” type situation. I’m aware that this series was originally intended to just be focused on one character, but that doesn’t mean that you don’t make an effort to flesh out the other characters and act like they’re there to be set dressing.

All in all, I really feel I have to give this another tie. It’s just too close for me to make a decision.