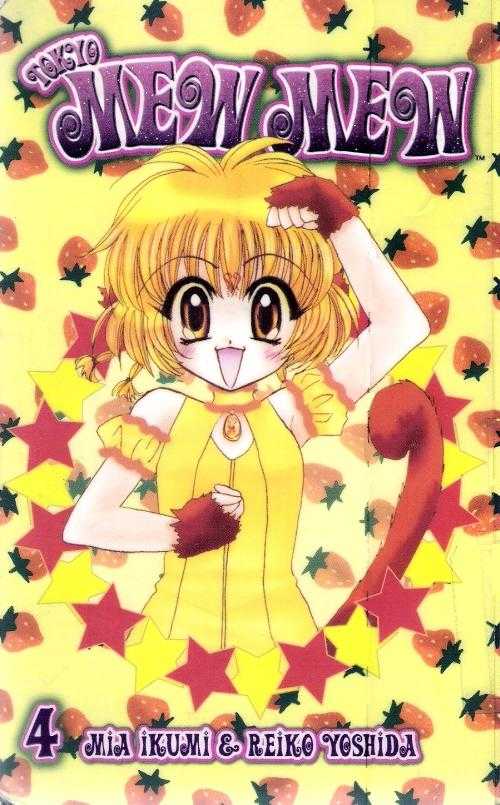 Plot: The Mews finally manage to find a way to destroy the cocoon that is housing a moth that could destroy all of Tokyo. Later, Ichigo and Aoyama go on a date to the aquarium when another encounter with the aliens introduces Ichigo to a mysterious man named The Blue Knight.

– So Shirogane tries to coax Ichigo into a kiss for the sake of experimenting with her cat transformation, but then he stops and says this.

“Wait a second…You turn into a cat when you’re excited. It has nothing to do with kissing.”

*Thinks of the anime*

(HikaYagami explained to me that the TokyoPop translation is kinda off in some places, so maybe this is another poor translation?)

– Interestingly, in the Moth arc, Mint is seemingly possessed/entranced and knows exactly where to go to get the Mew Aqua, which leads her to flying up to the top of the tower and retrieving it. The other girls fight off the aliens to allow her to get to it. This is important because it’s actually MINT who gets to use the Mew Aqua Rod in this arc and use the Aqua Drops to save the city from the toxin when it was Ichigo in the anime.

Granted, Ichigo still gets the final shot because of course she does, but we were robbed of a cool moment where Mint gets 1) to use a new weapon first (All of the Mews get to use this exact same weapon at one point or another, but this is the first) and 2) a moment where Mint got to shine all on her own.

– It was especially cute because Ichigo hugs her after, Zakuro pats her head and Pudding kisses her.

– The near-kiss with sleeping Aoyama doesn’t trigger a full-body cat transformation because we already went through that plotline.

– Oh cool, another reprise of rapist cat and this time he has a ‘love leash’ the two of them will share……Is it possible to have a cat arrested?

– So Shirogane said kissing doesn’t trigger transformation, but then he kisses Ichigo to make her transform when he’s Alto. Is it just because kissing her would get her excited? Is ‘excited’ the same thing as just generally flustered from being suddenly kissed? In the anime, she does fully transform once without kissing, but eventually even getting little platonic pecks from friends and kissing animals (instigated by her) makes her change. Her cat transformation never ceases to confuse me…

– There’s a plotline at an aquarium that isn’t in the anime. I think this might be what the date at the amusement park originally was, but I can’t be certain. Shame, because Ichigo fights a SHARK in it.

The anime kept pretty close to the manga when adapting this volume. The major point of contention being the Mint moment, and that just makes me irritated because there’s no reason whatsoever why they gave Ichigo the spotlight there outside of the anime having more Ichigo favoritism.

In most magical girl shows that have upgraded transformations, weapons and attacks, it’s common that the other team members will get something cool but the point will be made that the leader gets the coolest one – sometimes the other girls will all get their upgrades one at a time as a buildup to the big leader upgrade, and other times the leader will get her upgrade as a way of opening the door for the other girls to get theirs. It’s still blatant favoritism, but at least it’s better than letting the other team members stagnate to the point where I’m wondering why dusting the cobwebs off of their outfits isn’t a part of the other girls’ transformations after a while.

However, that positive note might be offset by the manga including another scene with rapist cat.

…….Nope, I’m actually going to give the manga this one today. Mint got a time to shine and Ichigo got to fight a friggin’ shark. You don’t get to rob me of those things and get away with it, anime.