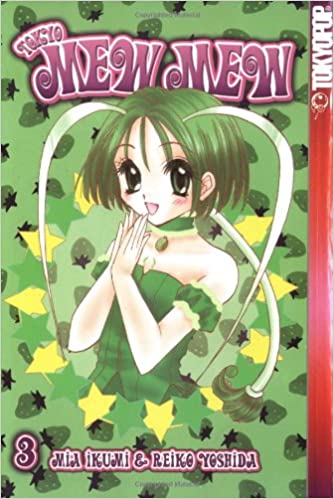 Plot: Ichigo’s relationship with Aoyama continues to grow to the point where she gets so flustered that she turns fully into a cat! Meanwhile, the aliens continue their plans, and the Mews learn more about Mew Aqua and what it can do.

– The scene in the classroom after Ichigo believes Aoyama found out she’s a Mew Mew is quite a bit shorter and, quite frankly, uneventful in the manga. He’s attacked, she transforms to save him and the chimera animal is dispatched very quickly. Aoyama’s never trapped in a bubble and Ichigo doesn’t kiss him to save him.

– The episode as a whole is much more detailed than the manga chapter, but the manga also includes a demonstration of a 1% bit of Mew Aqua bringing a dead bird to life. It’s kinda out of place, in my opinion, but it’s worth noting, and it does establish that Mew Aqua has this capability, which will come into play in the future.

– I still find it funny that she had an out to just fake a name to better cover her tracks and she doesn’t take it. Aoyama apologizes, in both versions, for calling her Ichigo since she reminds him of Ichigo, but her Mew name is Mew Ichigo (Even though she calls out the English, Mew Strawberry, when she transforms) It’s like “Oh sorry, I called you Ichigo. What’s your real name?” “Ichigo!” “….”

– Holy shit, Ichigo gets paid TEN BUCKS AN HOUR at the cafe?! With tips!? What the hell is she complaining about?

– They seem to have separated one chapter into two kinda. Chapter 11 takes place on Shirogane’s cruise ship where the anime seemingly got inspiration for the beach episode and the big fancy party episode. In this chapter, they’re all having a ‘vacation’ on his cruise, but he’s putting them, or moreso Ichigo, to work finding Mew Aqua. Lettuce turns into a mermaid to save a little kid that Pai is kidnapping for no reason, not to save Shirogane, though there is a bit of Shirogane/Lettuce shipping in there. And even though it’s possible he put Mew Aqua in Lettuce’s drink, she seems to have transformed on her own because of either confidence or being in the water.

– Something I’m now realizing is that the manga has crazy fast pacing compared to the anime. It’s way too fast at some points, especially the scenes with the actual Mews.

– The aliens’ backstory is basically the same, which I guess means their motives are still the same despite Shirogane saying they want to destroy the environment (Being fair, they’re very contradictory in the anime too) but I still don’t understand why the aliens just thought earth would be back to lush beautiful landscapes instead of the hellish natural disaster zone they left.

– Huh, I don’t remember Aoyama grabbing Ichigo roughly after they ran into Shirogane on their date in the anime, nor do I remember him kinda flirting with her in front of him.

– I definitely don’t remember Aoyama getting all close and cozy with Ichigo after that by wrapping her in a raincoat and hugging her from behind.

– Aoyama: “You’ve been wearing this!? Who gave it to you? If you were a cat with a bell like this, I’d take you home.”…..Uhhh….Can I have anime!Aoyama back? Because Manga!Aoyama’s getting super creepy. Also…is this because of his tri-personalities or did he just completely forget that he gave Ichigo that bell for some reason? I’m confused.

– This chapter includes Ichigo first turning into a cat, which happens because of the hot and heavy (still creepy) embrace instead of her kissing him while he’s sleeping…..which is also creepy.

– Ichigo doesn’t bathe with Aoyama at the point in which the anime has her do this (even though he was undressing and telling her to get in…..) And Alto doesn’t appear when he does so in the anime either. Shirogane seeks her out when Akasaka detects that she’s in trouble through energy signals.

– Ichigo can’t combat the cocoon because she’s a cat, but the cat transformation has nothing to do with that plotline in the anime.

– Ichigo’s last thoughts as she’s about to die are wishing she had made Mint do more work so she could relax more, wishing she could be around to celebrate Lettuce’s 100th broken dish, learning a circus trick from Pudding, making Zakuro smile and asking Shirogane for a raise…Most of those thoughts are dumb, and a couple of them are kinda mean.

– Also, Aoyama’s dog, who’s a sweetie in the anime, is a jealous dickwad in the manga.

– Oh good, rapist cat is in the manga too.

– Ichigo: “Nooooooooo!!!! He’s fat!” Nice cat body shaming, Ichigo…..Also, does that mean you’d be happier with a slim cat hitting on you and trying to sexually assault you?

– Alto shows up when Shirogane and Akasaka lose Ichigo after she spends the night with Aoyama.

– So Shirogane bitches out Ichigo for wandering off when a threat could’ve killed the girls, which is warranted, but then he goes on to chit-chat and flirt with Ichigo, even asking for a kiss….while the other Mews are presumably still in danger? Hypocrite.

This is another one where I feel like I’m on the fence. Most of my notes don’t really affect the quality of either version….but the fact that Aoyama continues to be incredibly creepy and possessive in the manga is putting me off enough to tip the scales.

It’s not simply those creepy moments either. He’s drawn in a creepy manner when he’s not being creepy at all. He could just be standing there looking at Ichigo and they don’t put any reflection in his eyes or expression in his face…Plus there’s fact that the fast pacing of the manga is becoming increasingly apparent as we go on.