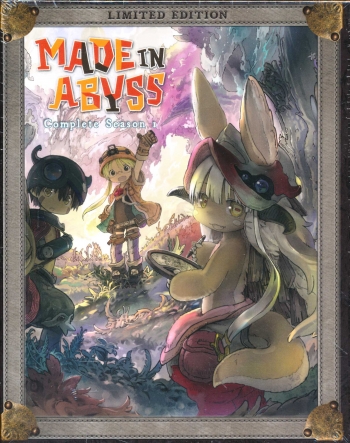 Plot: On the island of Orth, a massive pit called the Abyss beckons explorers with strange creatures and valuable relics. No one knows how deep the Abyss truly is, but cave raiding is so important to the city that even children are put to work excavating the Abyss.

One day, a lowest ranked cave raider, Riko, finds herself in mortal danger only to be saved by a mysterious burning light. The light originated from a boy lying unconscious very far from her location. She believes the boy to be a robot due to his metal arms, strange metal helmet and oddly textured skin. The boy that she names Reg has no memory of who or what he is, nor does he remember anything about Orth or the Abyss.

What secrets lie within the Abyss? And where did Reg really come from?

Breakdown: I caught a few glimpses of this show in an AMV a while back and it looked interesting. The art style for the characters looked simplistic and the characters didn’t seem like they had much to them, but I was intrigued by the concept and who doesn’t love cyborgs?

Now that I’ve given it a shot, I have to say it seems pretty good. It’s a fairly unique plot and setting, and I’m really curious as to the mysteries of the Abyss, especially Reg’s origins.

They introduce the characters pretty well. Riko is a hard worker, but she’s also a trouble maker. She really wants to rise through the ranks so she can go to the same levels in the Abyss as her mother.

Nat is a bit harder to pin down. He is less enthusiastic than Riko, but is nice enough.

Shiggy seems like the brains of the group, both making them a plan to sneak into their orphanage and creating a device to awaken Reg.

Speaking of the orphanage, how messed up is this place? Granted, the classroom is awesome, even if it’s an accident waiting to happen with everyone’s desks attached to the walls, but they’re all forced to be cave raiders and give over everything they find to their superiors to help pay for the orphanage.

It’s also really unclear as to whether these are even orphans. The head woman talks about their parents as if they’re still alive maybe, and Riko definitely talks about her mom as if she’s alive.

There’s not much to say about Reg yet. Being a character with amnesia, his dialogue consists heavily of just asking questions and looking around. Plus he’s only been awake for about a third of the episode. He could be a little funny, though.

I don’t know what to make of Leader yet. He seems like he genuinely cares about the kids, but he seems like he’s keeping secrets and might be an asshole deep down.

As I mentioned, the art for the characters is pretty simplistic, foregoing noses and making everyone’s head appear very rounded. It’s not bad, and the animation is very fluid. Plus, the landscapes are really nice. Not as awe-inspiring as I’d really like of a show like this, but very good.

The music is pretty mellow and nice to listen to, and the voice acting was all very well done even if Riko’s VA was getting a little grating. It’s mostly because she’s one of those characters who basically yells all of her lines.