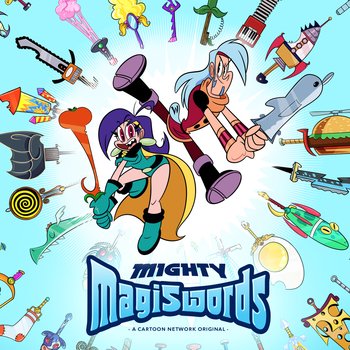 Plot: Warriors for hire, the clumsy sibling team of Vambre and Prohyas, trek out on quests as they collect magiswords – powerful swords of an endless array of shapes, sizes and powers.

Breakdown: I hate that this disappointed me as much as it did.

I had heard a decent amount of good chatter about this show before I finally gave it a watch, and….I just….I didn’t enjoy myself.

My first impression of Mighty Magiswords is that it’s one of those shows that tries too hard, and, as a result, it ends up just basically being a lot of noise. All of the characters are loud and have overly exaggerated mannerisms. Normally, I wouldn’t have much of an issue with that, these are cartoons after all, but everything goes at such a breakneck pace that you can’t really absorb the jokes when they come along. Some of the jokes hit with me, but everything else was like driveby comedy.

I honestly had such difficulty following along properly that I couldn’t even absorb the main characters names, which is especially odd because the theme song is one of those ‘explain the plot’ songs. I had to look at the Wiki to get their names jotted down. At least I remembered enough to make a suitable plot synopsis.

The hook of the magiswords is interesting, and I can see where the concept would make for a lot of comedy, but I can also see this shtick getting old fast. Basically, magiswords are a grab bag of pretty much any power they can think of from completely useless, like tomatoes and bacon powers, to somewhat good like making your arms super muscular.

The main characters seemingly already have a plethora of these swords that they can wield whenever they please, though it’s impossible to know exactly which ones they have. There was one battle in this episode, and they were whipping out magiswords with chewed bubblegum powers, laser pointers and even frog missiles.

In some ways, this show is kinda reminiscent of old, old, OLD cartoons where they’d pretty much just pull the world and everything in it out of their asses while they do kooky shit and bounce around, but in many others it reminds me of some irritating modern shows, like The Mighty B!, and that’s not a good thing.

Maybe I’m just an old curmudgeon who can’t find a taste for these mile-a-minute insane shows that rely heavily on randomness and yelling for their comedy, but this one just didn’t hit with me.

The art is alright, though there’s not a lot to make it stand out much. I do like that they made Vambre at least a little curvy and stocky instead of being overly stick-ified, but that’s really all the notably positive stuff I have to say in the realm of the art and animation.

I didn’t even really notice the music too much. That was another thing that just kinda got swept up in the rushing waters of this show.

I can see how some people might like this series, and maybe I’m just missing something, though I’m certainly not the first person to have these criticisms. As far as I can see, it’s just not my cup of tea.